The countdown is officially on for the end of "Mad Men," which returns to AMC in April and wraps up for good in May. But the show's cast already knows how the story of Don Draper and company concludes, and John Slattery says he's happy with how it all turned out.

Slattery told HuffPost Live's Caitlyn Becker on Tuesday that series creator Matthew Weiner met the high-pressure challenge of bringing it all to a satisfying end.

"The difficult part of ending something like that is that it seems inevitable and yet it's not predictable. The audience isn't ahead of it," Slattery said. "I think the way that Matthew figured out how to end it for everybody is very satisfying, and that's not easy to do. I mean, there's so much scrutiny on these series finales, and I think he did a great job."

Slattery told HuffPost Live last year that the goal was to cap off "Mad Men" with something unexpected because "it's much more interesting to expect one thing and get the other."

"That's why Matt's as good as he is, because he knows what the audience wants -- you know, Joan and Roger -- that's not what he's necessarily interested in," the actor said in May.

And though the "Mad Men" curtain call means the end of an era for Slattery, he said Tuesday that there's certainly a sweet complement to the bitterness of leaving it behind.

"I wouldn't say I'm happy it's over. I'm going to miss everybody, and I'm certainly going to miss playing that part. But again, I think the story was incredibly well-told, that group of people in that period of time, and I will miss it sorely, but I also look forward to moving on and doing other things," Slattery said.

In the meantime, he's appearing alongside actress Amy Morton in director Lance Edmands' "Bluebird," a striking character study of the residents of a small town in northern Maine.

Watch the full HuffPost Live conversation with the stars and director of "Bluebird." 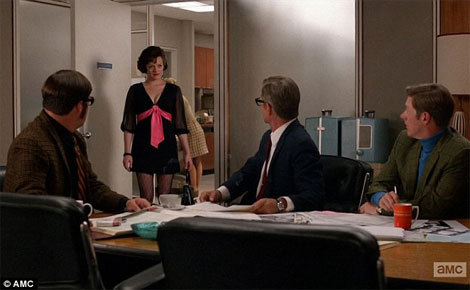