SANTA MONICA, Calif., June 8 (Reuters) - The gunman who killed four people in a shooting rampage in Santa Monica before he was slain by police at a community college in the California seaside town was once a student there and had a brush with the law several years ago as a teenager, police said on Saturday.

Santa Monica Police Chief Jacqueline Seabrooks also revealed that several students at the college survived Friday's shootings by hiding in an interior room of the library and piling up heavy objects against the door as the gunman fired through the walls at them.

Seabrooks detailed how the gunman, after killing two people identified by a law enforcement source as his father and brother and apparently setting their house on fire, went on to carjack a woman's automobile, ordering her at gunpoint to drive him from place to place as he fired at other individuals.

But two other people died - one of them a college employee shot while driving a sport utility vehicle in a school parking lot, and the other a woman gunned down outside the library at Santa Monica College.

A second woman who was a passenger in the SUV was gravely wounded, and Seabrooks described her prognosis on Saturday as "very grim." Authorities reported four other people who suffered less serious wounds, including a woman struck by gunfire in her car outside the burning house.

Police have disclosed little about the gunman or his motives, although the police chief said the suspect was carrying an estimated 1,300 rounds of ammunition with him at the time.

Seabrooks said the suspect would have turned 24 on Saturday, but she declined to reveal his identity, saying authorities wanted first to notify members of his family, who were out of the country. She acknowledged he had a "familial connection" to the scene of the house fire.

The newspaper cited other anonymous law enforcement sources as saying the suspect, who was believed to have lived with his mother, had suffered from mental-health problems in the past and was angry over his parents' divorce.

Seabrooks said the gunman was enrolled in the college, possibly along with a family member, as recently as 2010, and she cited a previous instance in which he had "contact" with law enforcement as a juvenile in 2006. She declined to elaborate.

The Los Angeles County coroner's department identified one of the four dead as Carlos Navarro Franco, 68, of west Los Angeles. He was the SUV driver shot in the staff parking lot.

BEGAN WITH GUNSHOTS AT HOUSE

Police say the carnage began shortly before noon when they received reports of gunshots at a house east of the college and arrived to find it engulfed in flames and two people dead inside.

A woman also was found slightly wounded by gunfire in a car outside the house.

By then, the gunman had fled the scene and commandeered the car of another woman, forcing her to drive him across town to the college as fired at a city bus, wounding three people, and later shooting Franco and his passenger.

The woman, identified by the Los Angeles Times as Laura Sisk, 41, told the newspaper she pleaded with the gunman to take the car without her, but he insisted: "No. You're driving."

She recounted that even though she was shaking with fear and crying, the suspect remained calm and said little after ordering her to drive to the college.

"He told me to calm down," she told the Times. "He said he'd let me go if I didn't do anything stupid."

Dressed in black and wearing a ballistic vest, he walked on to the campus carrying an assault-style rifle and a bag filled with multiple ammunition magazines, a handgun and other firearms gear, Seabrooks said.

He traded gunfire with police who confronted him outside the library, fatally shot a woman bystander, then entered the library and continued to fire away inside as three officers pursued him and ultimately shot him dead, Seabrooks said.

Several library patrons took shelter in a study room when they saw the gunman approaching, and Seabrooks said, "It's miraculous that those individuals were not physically injured."

"They stacked items ... against the door, hunkered down and avoided shots that were fired through the drywall at them as they were in that room," she said.

A second man arrested when he was found carrying the gunman's gear bag told police he discovered the item unattended at the edge of campus. He was determined not to be involved in the shooting and was released, Seabrooks said. (Reporting by Dana Feldman; Writing by Steve Gorman; Additional reporting by Alex Dobuzinskis and Dan Whitcomb; Editing by Colleen Jenkins and Peter Cooney) 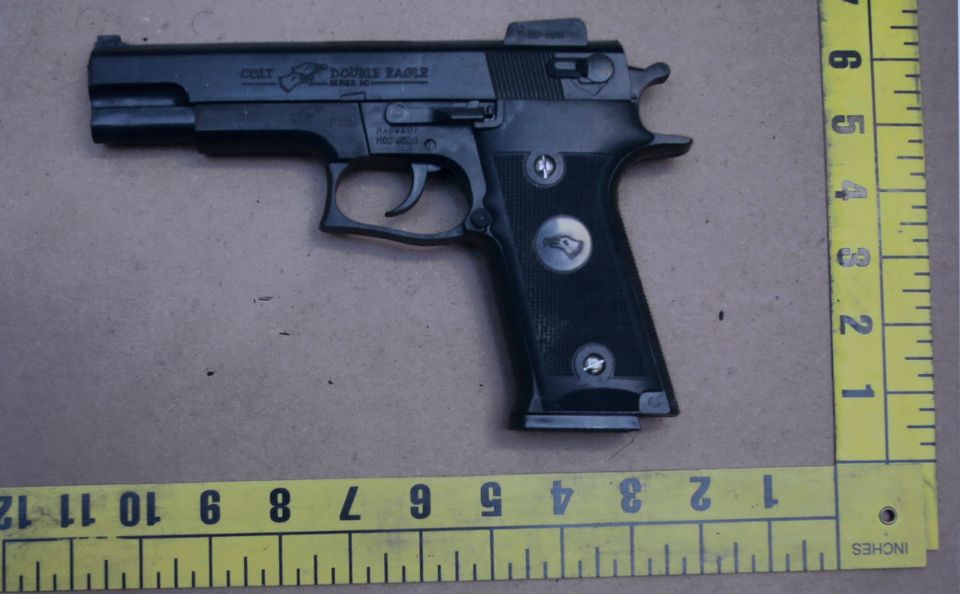