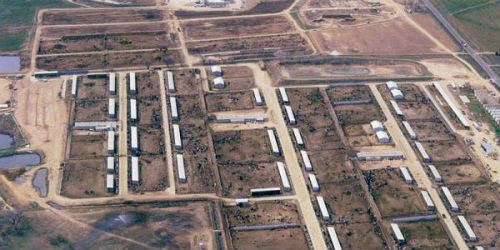 In 2008, the Pew Commission on Industrial Farm Animal Production published the most comprehensive analysis of the impacts of industrial meat, egg and dairy production undertaken to date. As came as little surprise to anyone remotely familiar with the issue, the Commission's report indicated that industrial livestock production poses serious threats to human health, the environment, rural communities and animal welfare. After describing these problems in great detail (think 122 pages of white-paper-tiny text replete with endnotes and parenthetical references), the report provided a series of recommendations for mitigating the adverse impacts of this sector of the food system.

Today, Johns Hopkins University Center for a Livable Future (CLF) released a new report assessing the impact of the Commission's recommendations and the progress toward implementation made over the last five years. As will come as little surprise to anyone remotely familiar with the current state of the U.S. meat, egg and dairy industries, CLF's report reveals that industrial livestock production is still just as destructive as it was five years ago, and that despite the continual emergence of new scientific evidence demonstrating the severity of the threats it poses, remarkably little has actually been done to address any of the problems.

According to Dr. Robert Lawrence, director of CLF, "There has been an appalling lack of progress. The failure to act by the USDA and FDA, the lack of action or concern by the Congress and continued intransigence of the animal agriculture industry have made all of our problems worse."

It's important to note that Dr. Lawrence and his colleagues at CLF aren't the types to cry wolf; they're prudent, thoughtful, painstakingly diligent public health experts whose work, unlike that sold by the agribusiness lobby's hired guns, is rooted deeply in sound science and academic integrity. So when CLF declares that a problem is serious, it warrants immediate attention. Somehow, though, it seems that policymakers never got the memo; as described in today's report, the regulatory response to the Commission's 2008 recommendations has been woefully inadequate. In fact, report authors decry an "assault on reforms" in Congress and argue that regulatory agencies have acted "regressively."

Today's report assesses the progress (or, more accurately, the shocking lack thereof) made toward meeting the Commission's six priority recommendations from 2008:

Paradoxically, the appalling lack of progress made toward addressing the serious concerns described in the Pew Commission's 2008 report occurred over a time period when public awareness of (and interest in) food and agriculture issues had never been greater. Indeed, there exists a bizarre disconnect between members of the public, who continually express dissatisfaction with the industrial food system and increasingly choose to avoid the products it generates, and their elected officials, who've not only failed to address the threats posed by industrial livestock production, but in many cases, have actually exacerbated the problems through deregulation, misappropriation of right-to-farm laws, creation of ag-gag legislation and other policy decisions that benefit industry at the expense of the greater social good.

The implications of CLF's report were perhaps best summarized by the Commission's executive director, Bob Martin, who lamented the regulatory void, noting, "Inaction was inexcusable five years ago, now it is unconscionable."