Please consider participating in a 24 hour Fast Against Torture in memory of all those illegally and unethically tortured around the world, including, most importantly, those tortured and waterboarded by the Bush-Cheney Administration.

Sunday August 1, 2010 is the eight-year anniversary of the writing of the "torture memos" by Office of Legal Counsel lawyers, John Yoo and Jay Bybee. After Bush, Cheney and other White House principals approved of "dark side" methods, they got their lawyers to "legalize" various forms of torture through the series of OLC memorandums that culminated with the "torture memos" written on August 1, 2002. Recently Congressman Conyers released what Bybee, who is now a 9th Circuit Judge, told the House Judiciary Committee in his recent non-public interview. While Bybee did not admit any wrongdoing, he did blame Yoo for being too close to the White House when Yoo apparently formulated the memos that attempted to "legalize" torture. Not surprisingly, thousands of Yoo's e-mails during this time have suspiciously disappeared.

Coincidentally, the statute of limitations (SOL) specifies eight years as the time period for bringing a prosecution under the Federal Torture statute. So legislation is desperately needed at this point to extend the SOL as it soon could run, for instance, on certain acts of waterboarding begun as a result of Yoo-Bybee's (August 1, 2002) "torture memos." Obama's insane slogan about "looking only forward" to ignore past crimes has begun to wear thin. Legal authorities as diverse as FOX News Judge Andrew Napolitano are appalled at the lack of accountability and New York Congressman Jerrold Nadler argues that "failing to prosecute former Bush administration officials complicit in the use of torture would create a dangerous precedent and place America on a path to 'tyranny.'" 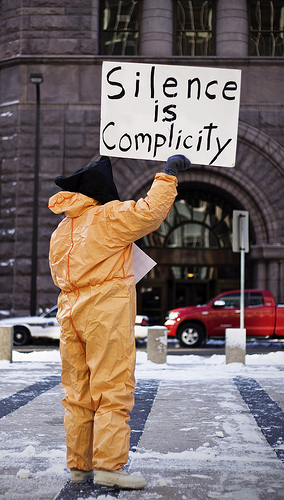 Just one day after announcing the Fast Against Torture on Facebook, people from all over the world have committed to participating. Those with good health who can do so, have pledged their intention to fast (except for water) from 6 pm on August 1 to 6 pm on August 2, 2010. Many are also pledging to contact President Obama, Attorney General Holder, their US Senators (most importantly those who sit on the Judiciary Committee), their Congressperson, other elected officials and/or their local newspaper.

Speaking of writing letters to the editor, a good one was published today by the Minneapolis Star Tribune entitled "Liberia gets justice. What about America?" It turns out that since the Federal Torture Statute was passed in 1994 following the ratification of the Convention Against Torture, only one person has ever been charged under that statute. His name was Chuckie Taylor, and he was the son of Charles Taylor, the former President of Liberia. The torture Chuckie committed was as head of his father's "Anti-Terrorist Unit." The irony of convicting a Liberian for torturing in the name of anti-terrorism is nothing but seeing the speck in another's eyes but not the log in our own.

For those who live in the Twin Cities area of Minnesota, you are invited to also come join our all-day vigil anytime during the day (Monday) of August 2 in front of the US Courthouse, 300 4th St. S, Minneapolis, Minnesota. "Tackling Torture at the Top" (a committee of Women Against Military Madness) began this daily noon hour vigil in October 2009 but it will go all day on Monday, August 2nd. So come stay for a few minutes, an hour or the entire day as we fast, hold signs and hand out leaflets. Look for us in the orange "Close Gitmo" jumpsuits. 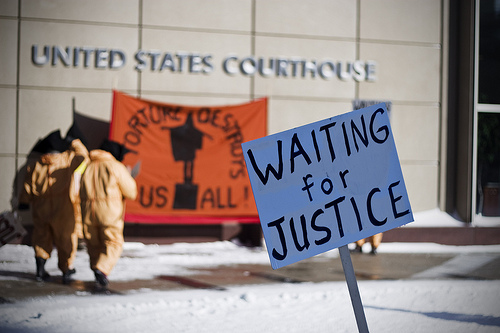