"It's kind of weird to me," he tells The Huffington Post. "I don't really like the attention. But if it helps the animals..."

Here's the photo that started it all:

The picture of Boyer with a kitten he'd rescued was taken by some admirers -- there's even a fan page on Facebook called "I love Jon Boyer" -- who work at BARCS, Baltimore's largest open-admission shelter.

"Seems he’s constantly coming in with animals he’s rescued from abandoned buildings or the streets," says Sande Riesett, who created an anti-animal abuse campaign called "Show Your Soft Side." It features big men, including Boyer himself, being kind to animals. "All the ladies there go gaga." 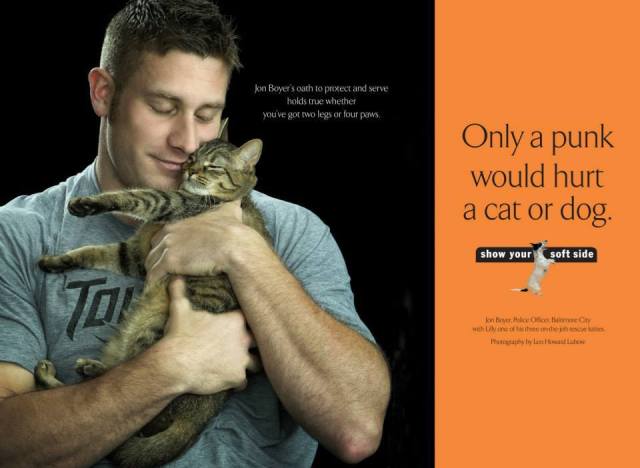 Boyer, who's 26 and has been working as a cop for about three and a half years now, told "I Have Cat" -- one of a number of cat enthusiast websites that have profiled him since the kitten photo first hit the internet -- that despite his regular rescue activities, it's not in his job description to bring abandoned, neglected, hurt and abused animals to the shelter.

Show Your Soft Side started in 2011; "softies" so far have included athletes, business owners, police officers and others -- you can check out the whole impressive bunch of them here -- who do have a problem with poor treatment of animals. Many of them have adopted and fostered pets of their own.

Riesett says she "can't say" if the images have impacted the number of abuse cases in Baltimore, but "we absolutely, positively do know it’s increased adoptions, donations and volunteerism" for local shelters and rescue groups.

"In fact, it’s been so successful here in Baltimore that Pet Valu is now partnering with us to take the campaign to Philly," she says. "It gives people a chance to see a side of these guys they wouldn’t ordinarily see -– and it’s a side people love!"

They love it a lot. Using Boyer's Show Your Soft Side ad -- which shows him with his kitten Lilly; he had six rescue cats, but lost three in a break-up -- BARCS auctioned off a date that ended up going for $370, after a lot of saucy online conversation that somehow never involved the word "cougar."

"The winner was actually two twin sisters," says Riesett. "For their date, he first took them to BARCS where they cuddled kitties -– but to this day, I still don’t know what they did afterwards!"

Says Boyer, who claims the only thing he fears is spiders, "We all do what we can."