It's not often that we write about Jon Hamm's crotch, but here we are. According to the New York Daily News' Confidenti@l, the "Mad Men" star is reportedly running into problems (and possibly narrow doorframes) on the set of the show, due to, erm, restrictive '60s-era pants.

Which got us thinking about Spanx -- specifically, Spanx for men ("manx"). We know women love Spanx (Katy Perry, Oprah and Octavia Spencer are just a few of the stars who have come forward in admitting their devotion to the industrial-strength Lycra). The underwear smoothes lumps and bumps and offers another layer of coverage. But it wasn't until recently that men started sharing their feelings on the shapewear.

Brad Pitt reportedly "battled a pudgy midsection" with smoothing shapewear while shooting his ad for Chanel No.5. "Project Runway" judge Tim Gunn swears by them. "As a man, even I wear it occasionally," Gunn confessed. "Because everything just looks a little more fit, and slim, and trim."

Perhaps Hamm should pick up a pair of manx for their smoothing effects? Hey, just sayin'. Read more about the, uh, situation at NYDailyNews.com. 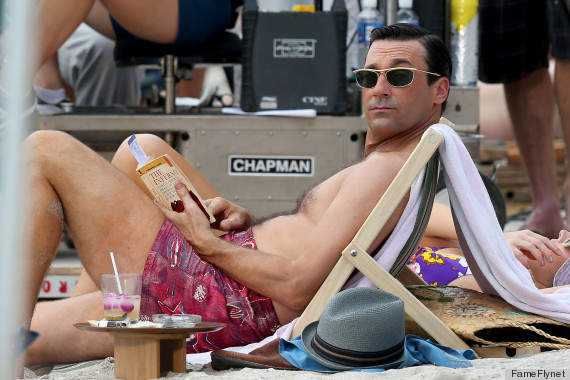 Check out all the celebrities who love Spanx: