Jon Jones made short work of Chael Sonnen in their highly anticipated bout at UFC 159. The light heavyweight matchup ended with a TKO in the first round. After Jones' fifth straight successful title defense, all eyes were on the injured big toe on his left foot.

After the fight was stopped at 4:33 in the first round, Jones began his post-fight interview despite his injury. He would eventually sit down, continuing to speak as trainers attended to his foot.

"They would have stopped the fight [at the end of round 1]," UFC President Dana White said during the post-fight press conference regarding Jones' injury, via Ben Blackmore of ESPN. "That's a fact"

Luckily for Jones, the ref ended the fight before the end of the first round and before anyone got a good look at the damage to his foot.

Jon Jones defends his UFC title despite a jacked up toe: pic.twitter.com/eYmcPLXiTS

NEWARK, N.J. (AP) — Jon Jones bloodied Chael Sonnen with a series of strikes to the face in the first round to win by TKO and defend his light heavyweight championship on Saturday night at UFC 159.

Jones (18-1) matched Tito Ortiz in UFC history with his fifth straight successful light heavyweight title defense. Jones, though, appeared to break a toe and quickly needed assistance inside the octagon.

He hobbled around and used a stool to sit for his post-fight interview. Jones rested with the belt around his waist as doctors wrapped his foot. He walked out with no assistance and his left big toe bandaged up.

Jones needed little time beating the trash-talking Sonnen (28-13-1). After his third takedown, Jones buried a knee to the body, then went to work on Sonnen's face. Sonnen covered up as the ref stopped the fight at 4:33 of the first. 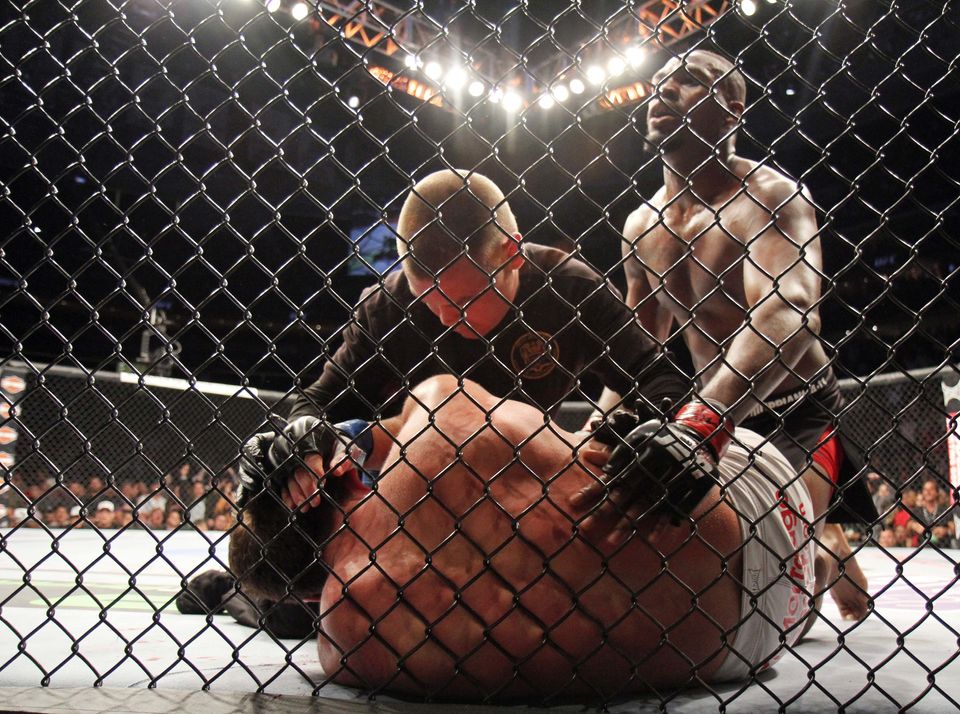