Top Senate Republican Jon Kyl (R-Ariz.) insisted on Sunday that Congress should extend the Bush tax cuts for the wealthiest Americans regardless of their impact on the deficit, even as he and other Republicans are blocking unemployment insurance extensions over deficit concerns.

"[Y]ou should never raise taxes in order to cut taxes," said the Arizona Senator during an appearance on Fox News Sunday. "Surely Congress has the authority, and it would be right to -- if we decide we want to cut taxes to spur the economy, not to have to raise taxes in order to offset those costs. You do need to offset the cost of increased spending, and that's what Republicans object to. But you should never have to offset cost of a deliberate decision to reduce tax rates on Americans."

White House aides immediately seized on the comments. Press Secretary Robert Gibbs wrote on Twitter, "Kyl says wealthy need big Bush tax cuts while middle class families are on their own to fend for themselves as a result of Bush economy."

In private, administration officials say that the framing of the argument couldn't be more advantageous: "It's cutting taxes for the wealthy and letting the unemployed to fend for themselves," said one White House ally.

"If all of this has a familiar ring to it, it's because unpaid for tax cuts for the rich at the expense of working people is the same backward policy Republicans used to put the nation in this hole, and it's the same policy they promise to return to if put in a position of power again," added Hari Sevugan, press secretary for the Democratic National Committee.

Asked to expand on his tweets, Gibbs declined comment, save to clarify that "the question [host Chris] Wallace specifically asked Kyl was [about] the upper end of the Bush tax cuts (above $250,000)."

But the politics already are fairly obvious. For the past few months, congressional Republicans have demanded that any additional spending be offset by budget cuts or revenue increases elsewhere. Also on Sunday, White House senior adviser David Axelrod blamed deficit concerns for the difficulty in finding a 60th vote in the Senate for unemployment benefits even though, as of Friday, 2.1 million people have not received checks that they were expecting in June.

And yet, Kyl is now suggesting that the same budget rules shouldn't apply with respect to tax cuts for the wealthy, which are set to expire unless Congress acts to renew them. As Steve Benen at the Washington Monthly notes:

It's quite a message to Americans: Republicans believe $30 billion for unemployment benefits don't even deserve a vote because the money would be added to the deficit, but Republicans also believe that adding the cost of $678 billion in tax cuts for the wealthy to the deficit is just fine.

Kyl is one of the most prominent members of Congress to advance the argument that jobless benefits make people not want to look for work, a position disputed by economists across the political spectrum. Unemployment insurance "doesn't create new jobs. In fact, if anything, continuing to pay people unemployment compensation is a disincentive for them to seek new work," Kyl said last March on the Senate floor.

The chart below shows the deficit impact of the Bush tax cuts over the next decade. 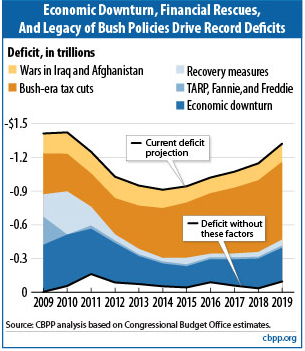