I missed this when it was reported a couple days ago, but apparently, a few days after Senator Jon Kyl (R-Ariz.) stood on the Senate floor and misled America about what proportion of Planned Parenthood's activities were related to abortion -- which begat his famous "not intended to be a factual statement" excuse that brought a torrent of ridicule down upon him -- Kyl had his false statement stricken from the Congressional Record. You can do that? Apparently so!

Senators enjoy a neat perk: the right to "revise" and "extend" their remarks. Lawrence O'Donnell did a good explainer on this:

O'DONNELL: The Library of Congress website explains: "The Congressional record is not an exact record of the proceedings and debate in the House and Senate. As previously stated, it is a substantially verbatim report." The operative phrase there: "it is a substantially verbatim report" -- not a completely verbatim report. The explanation continues: "Members of both Houses are allowed to edit the transcript of their remarks before publication in the daily Record, permanent Record, or both." And there's a simple reason why. The Congressional Record is the official account of everything taking place inside the Senate and House every day that they're in session. It is an historical document produced by the Government Printing Office. The right to revise its text was originally created to insert the full text of legislation that is often read only in part on the Senate floor, and of course to grammatically revise certain remarks, and to extend certain remarks, add thoughts that didn't occur to the speaker while extemporaneously delivering those remarks.

As O'Donnell points out, the "privilege has been extended to include" the correcting of factual errors. So while the Congressional Record used to read, "If you want an abortion you go to Planned Parenthood and that's well over 90 percent of what Planned Parenthood does," it now reads like this: 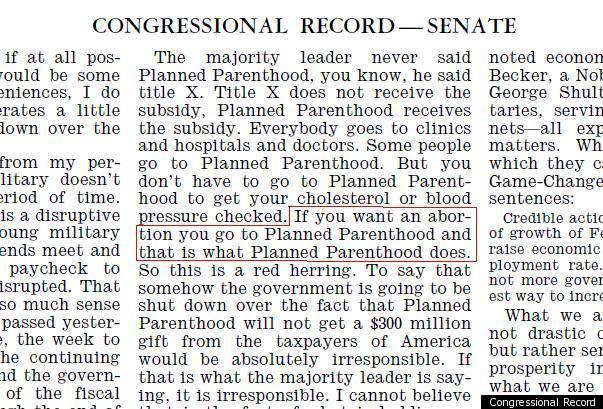 So! On the one hand, who cares? Obviously, Kyl's remarks will not be going down the memory hole anytime soon. I'm pretty sure that MoveOn will find some way of beaming a YouTube video of Kyl's "not intended to be factual" remarks into space, if they haven't already. On the other hand, you have to laugh at our legislators' need to create an "official history" of the government, lest future generations think our lawmakers were anything other than morally upright individuals who spoke in perfect English grammar.

At any rate, never forget these things: Jon Kyl's original statement, and the tendency of lawmakers to turn any "privilege" they are granted into something they can abuse for their personal gain.