A conservative artist has unveiled his latest portrait: an image of President Donald Trump on a red, white and blue motorcycle with first lady Melania Trump sitting behind him as supporters cheer.

New Painting – “MAGA Ride” by Jon McNaughton
Trump is maneuvering his way through a corrupt Washington DC, despite the constant bumps and detours imposed upon him. Enjoy the ride… “MAGA RIDE!”
About the painting, go to: https://t.co/yrH5Db8QPt pic.twitter.com/WQ2tvlMRtW

“I wanted to paint a picture of Trump and Melania on a jacked-up motorcycle totally painted up with the American flag and patriotism as they ride down a bumpy, crumbly road that represent the hazards and the problems that this presidency has faced since Trump has been elected.”

Neither Trump nor the first lady is pictured wearing helmets.

“Get ready,” McNaughton said. “This is the MAGA ride!”

But when it comes to art, everyone’s a critic ― and many of McNaughton’s critics have made their feelings known on Twitter:

🎵get your motor runnin'🎵 pic.twitter.com/mgz2YyNSU5

"MAGA" in the cracks. Is MAGA ruining our highway systems, Jon? What are you trying to say? pic.twitter.com/J1OolypvVW

When you can't even draw a circle pic.twitter.com/xiBK9XoYd2

Theres more people in this painting than his inauguration

I don't think I've laughed this hard in a long time. Not just because it's hilarious imagining @realDonaldTrump trying to ride a motorcycle with Melania on the back, but notice the cracks in the crumbling road spell out MAGA. 🤣 #InfrastructureWeek 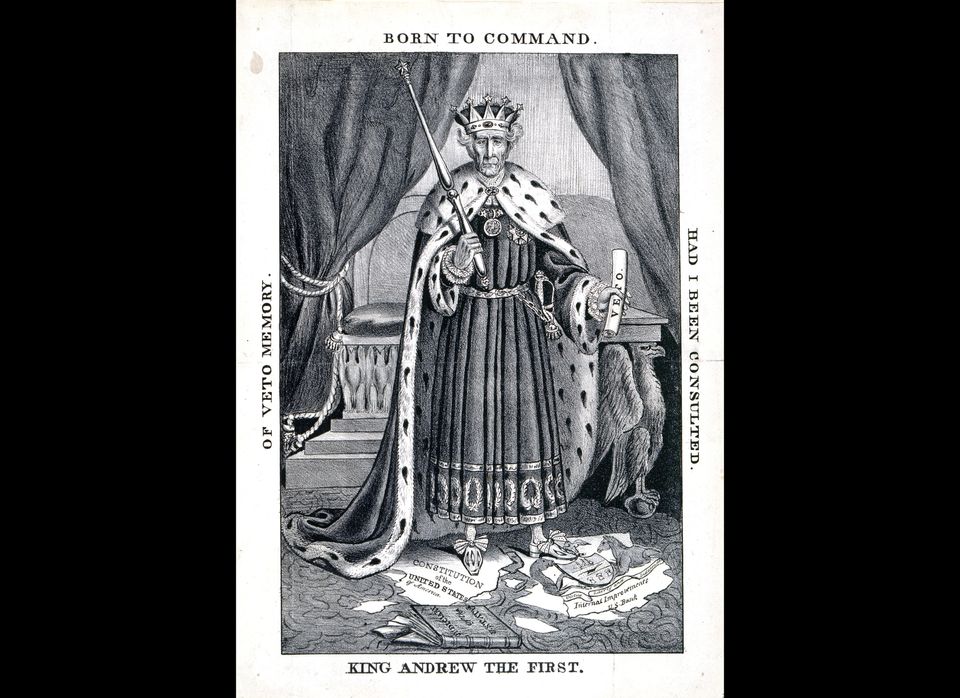 1 / 9
1832
In the early nineteenth century, many Americans still remembered firsthand the oppression of royal rule. That's why in this poster presidential candidate Henry Clay set out to paint the incumbent Andrew Jackson as a tyrant prone to letting his strong will run roughshod over the U.S. Constitution. Clay was certain that the image of a crowned, scepter-bearing Jackson standing in front of a throne would be like a bucket of cold water to voters. Instead, Jackson defeated Clay by a huge margin: Jackson won 219 electoral votes to Clay's 49 electoral votes.