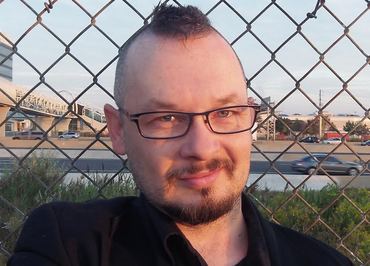 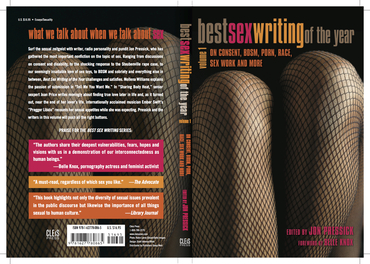 David Henry Sterry: When did you first become interested in sex?

Jon Pressick: I was a truly early bloomer. Blooming all over the place and making a mess everywhere. Middle school? Earlier? I really don't remember, but I do know that sex has preoccupied my mind for a long, long time. It is great to take those thoughts beyond my own enjoyment.

JP: I've never had sex with an American! I don't think so, at least. Does it involve guns and apple pie, because you know where all about maple syrup and canoes in our sexy time. And of course, it is so polite as to be awkward, at times. We're at a crucial time, in sex education where I live (outside Toronto). Our province has just mandated a progressive sex education curriculum that will come into effect next fall. We sex happy folk are rejoicing (even though the curriculum could use more work) while the right-leaning and religious folk are up in arms. On the other hand, I read with morbid fascination Alice Dreger's livetweeting of her kid's abstinence-based sex ed class...wow. The more I read and hear about American sex ed, in classrooms, communities and home, I think we Canucks are on a better track. We're not chugging with great speed, but we're not derailed either.

DHS: You talk about sex on the radio, is that different than talking about sex in the flesh? What are some of the highlights of your radio sex career?

JP: You know that thing about having a face for radio...? Well, it isn't that bad, but I am, deep-down, fairly introverted. I can speak freely, openly and happily with my familiars and perfect strangers about sex...but it is even easier on the radio. Sex City has such an open concept with very few limitations so I've talked to Bigfoot softcore filmmakers, Dr. Carol Queen and everything in between. Some of my highlights are my infamous armpit fetish model interview and having Candida Royalle tell me I have a sexy voice.

DHS: I see that you are both a pundit and a mogul? How do you get to be those things, and do they conflict?

JP: Well, one is a misnomer, for sure. I've been around long enough, tickling keyboards and flapping my lips about all things sex that people actually ask my opinion. I'm still flabberghasted (and entirely Canadian) about that. But, I can usually be relied upon to give good words. Now, the mogul part I'm still working on. Am I wealthy in knowledge, experience and fantastic connections? Absolutely. Do I get excited about sales on sex toys? Of course, because I can't afford them otherwise.

DHS: I understand you're also a general gadabout. Is that different than being a specific gadabout? And how does one get started as a gadabout?

JP: I tried being a more specific gadabout. I wrote primarily for the queer community (publications and web) for a number of years. But I found that limiting and had to expand the bounds of my gadaboutry. It was only natural to spread my legs to sex. Since then, I've done the radio, performed burlesque, spoken at conferences, participated in sex work, taught workshops and now edited books--all while writing for whomever will take it. I flit around as much as I can. If someone would like to emulate this and embark on the gadabout life, I suggest you get yourself as scattered as possible--but invest in a dayplanner.

DHS: What was it like wrangling all these people who write about sex?

JP: I would offer the cliche that it was like herding cats...but it really wasn't. Many of the pieces included in Best Sex Writing of the Year came to me (ahhh, willing submission). Others I sought. In almost all cases, the response has been one of joyous, enthusiastic consent. Now, as in all relationships, sometimes we lose focus, sometimes reminders on the fridge are needed. Sometimes we don't always pick up our socks when we should. But I've spent years and years coordinating writers--the majority of whom I wasn't paying with anything but my heartfelt thanks, good connection and experience. Now, with a budget behind me, I'm in a much better state to work with and help and coddle and cajole writers. Even though I really didn't have to that much. But I was ready to!

DHS:If there were a position open in the government for czar of sex, and you were given this appointment, what would you do?

JP: In my role as Grand Poobah of Pleasure, I'd be writing cheques all over the place for groups such as Planned Parenthood. I'd get them in schools and make sex ed classes fun, shame-free learning environments. I'd decriminalize sex work. I address sexual assault by retraining police, reclassifying it as a crime to further protect victims while at the same time punishing and establishing rehabilitation programs for offenders. I'd strip any influence sex negative idealogues have out of the governance of sex and promote sex as a positive, pleasurable aspect of our lives.

DHS: What are some of the takeaways of the best sex writing of the year?

JP: This book is diverse--and that is the key to our evolving societal sexual conversation. All of the voices need to be heard. The young, the old, the people with disabilities, the sex workers, the pundits and gadabouts. There are so many stories, and many of those stories have another side to them. While sex is the common theme...the complexity of our experiences ensures a unique experience in each contribution.

JP: What I learned was one in the same here. The opportunity to read works and speak with writers of this calibre has created a desire to up my game. Since I completed this work, I think I've been a better writer. I've seen the work of masters and I've seen where I needed to improve--and keep working at it. Writing about sex is unique work. It isn't easy to create, capture and maintain the nuance of these pieces. And sex is the same way. I read work that challenged me to think about my own sex life. I'm a 40+ year old man and have a type of life experience. Now I've seen more...now I want more even more.

JP: Start a blog. Have a public space you write in and contribute to it often. Let people know they can read it. Encourage feedback. Fight for your words when people critique you...but at the same time take time to learn and admit as much when you fail. Write without shame, but don't shame others. Work hard at finding your voice, your technique and your power. You have it, find it. Oh and sex? All of the above, though be careful with the blog part.

David Henry Sterry is the author of 16 books, a performer, muckraker, educator, activist, editor and book doctor. His anthology was featured on the front cover of the Sunday New York Times Book Review. His first memoir, Chicken, was an international bestseller and has been translated into 10 languages. He co-authored The Essential Guide to Getting Your Book Published with his current wife, and co-founded The Book Doctors, who have toured the country from Cape Cod to Rural Alaska, Hollywood to Brooklyn, Wichita to Washington helping writers. He is a finalist for the Henry Miller Award. He has appeared on National Public Radio, in the London Times, Playboy, the Washington Post and the Wall St. Journal. He loves any sport with balls, and his girls. Davidhenrysterry