When it comes to the age-old rivalry between New York and Chicago, it always seems to boil down to just one thing: Pizza.

On Wednesday's "The Daily Show," Jon Stewart proved exactly that when a segment on One World Trade Center dethroning the Sears Willis Tower as the nation's tallest skyscraper (thanks to a new ruling on its lengthy spire) shifted into an epic tirade targeting the pride of Chicago, its signature deep-dish pizza.

"Let me explain something, deep-dish pizza is not only not better than New York pizza. It's not pizza," Stewart explained. "It's a f***ing casserole!"

Stewart went on to liken Chicago-style pizza to "tomato soup in a bread bowl," "an above-ground marinara swimming pool for rats" and, most damningly, "sex with a corpse made of sandpaper."

Plenty of others have disagreed with Stewart of course, and Chicago still holds the distinction of the nation's most "life-changing" pizza, it should be noted.

While we think Stewart was more than a bit too harsh in his assessment of deep-dish (and wonder if he's ever actually eaten it), we have to admit we're a little intrigued by his potentially game-changing suggestion to top it with canned onion rings. Thanks, man!

Watch the segment above. 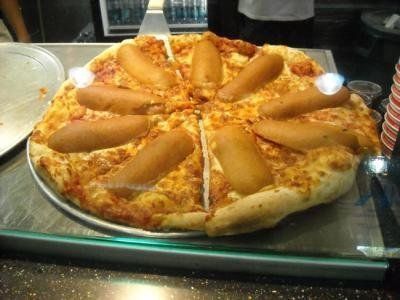