It's been almost two years since two terrorist brothers bombed the 2013 Boston Marathon, killing three people and injuring or maiming hundreds more. While the world watched in horror and shock during the hunt for the bombers in the days following the attack, officers of the Watertown, Massachusetts Police Department risked their lives while in direct confrontation with the terrorists.

This past week, fittingly at the same time that the surviving terrorist brother's trial is undergoing jury selection, President Obama awarded those heroes--five policemen and two firefighters--the Medal of Valor, our nation's highest award given to an officer of the public for valor and courage. They exhibited "exceptional courage, extraordinary decisiveness, and unusual swiftness of action, regardless of personal safety, in an attempt to save or protect human life."

Watertown Police Chief Ed Deveau, who nominated the officers for the medal, told me after the ceremony, "My officers were confronted by individuals shooting and throwing bombs directly at them. Their quick thinking and actions went far beyond our training. They put themselves in the line of fire at great personal risk to protect our community and our country. They are my heroes." 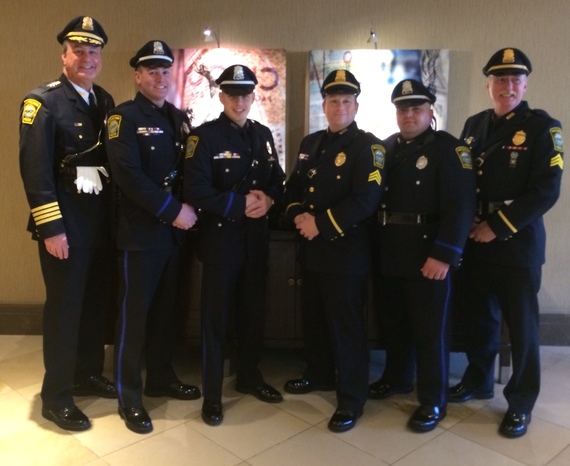 What Makes a Hero?
At a time when violent terrorism has replaced political discourse, when shootings and killings have become accepted content in mainstream music videos, it's now more important than ever that we recognize and commend our true heroes. More important, we need to make sure that our children and young adults do the same, and learn the true meaning of citizenship and heroism.

Why the children? Because in the same week that these Medal of Valor heroes were being recognized by the President, the seemingly biggest news around our country was who will replace Jon Stewart on Comedy Central. And while the resignation of a popular host of a comedy show is certainly news, and many celebrities like Stewart have made noteworthy contributions to their crafts, what message are we sending to our kids when we encourage, tacitly or explicitly, hero-worship of people who have done nothing actually heroic?

The Watertown policemen, ranging from a young cop straight out of the academy to a 34-year veteran, faced extraordinary, life-threatening danger. In a dark side street, with a hail of bullets coming from the terrorists' car and bombs and grenades already at their feet, including a pressure bomb exactly like the one used at the marathon, they directly confronted the terrorists, returning fire with little to no cover. One cop, Sgt. Pugliese, while facing the gun-toting, older brother advancing on them less than 10 feet away, made the split-second decision to tackle him. This almost certainly saved not only the lives of his fellow officers, but helped stop what was later discovered to be a plan to bomb New York City.

Do they do this on Comedy Central?
Other public service officers from around the country received the Medal of Valor along with the Watertown heroes. Ex-Chief John Curly of the Bellmore Fire Department broke through a blazing, smoke-filled window with his bare hands and no protective gear, to climb in to a burning building to save a trapped, 92-year-old woman. Los Angeles Sheriff's Deputy Jenna Underwood-Nuñez, off-duty and five months pregnant, dove into a freezing muddy lake to save a drowning teenager. Five Alabama FBI agents daringly rescued a 5-year-old being held hostage, while under heavy gunfire and an IED attack from the abductor. Not one of these exceptionally brave men and women, and others like them, ever expected or wanted to be thanked, but their stories could serve so well to collectively educate all of us, and especially our children, about our society's true values.

And Then There's Brian Williams
One other news item that captured headlines this week is worth noting in context of what constitutes heroism. It involves newscaster Brian Williams, who "conflated" his involvement in dangerous events to sound more courageous than it really was, such as being in a helicopter in Iraq that was hit with an RPG (he was in a helicopter behind it), or seeing dead bodies floating down the street during Katrina. We can forgive Williams, a little, when he says that he 'misremembered' the events and feels genuine remorse. What can't be ignored, though, is that his mis-memories resulted in a false image of him as a brave, intrepid reporter, when in reality, many truly heroic deeds of those surrounding him went unreported.

The word 'hero' has to mean more than being innovative and a trailblazer like Jon Stewart, or coincidentally being in a harrowing situation where dangerous things just happen to you. Heroism and bravery is purposely putting yourself in harm's way to save another. It's selflessness and sacrifice regardless of logic or fear.

Teach the Children Well
We hear a lot about "teaching moments" and "life lessons," but do we really know them when we see them? By honoring our heroes and promulgating their brave stories, we can be reminded of the ancient Greek's definition of "citizen." Aristotle said that to be truly human, one must be an active citizen to their community. More than just the enjoyment of rights and protections that were granted by the state, citizenship meant lifelong obligation to your community and your fellow members.

Our Medal of Valor recipients already knew that. Isn't it time the rest of us understood it, too?