Why do dictators fear laughter? Consider Jon Stewart, who returns to his anchor desk on The Daily Show on September 3, after a summer hiatus to direct a documentary film. Toppling governments is not his aspiration. Yet his punster counterparts in some countries face arrest because their humor threatens leaders. There is danger in jokes. And hope.

Hence the delight of fans who welcome Stewart's return to his Peabody-and-Emmy-award-winning program. Polls show this comedian to be one of our most trusted news sources. He simultaneously parodies conventional news genres and speaks truth to power. We laugh in hope that Stewart's barbs reach their targets and that oppressors will tumble. If we also worry that he wields mere slingshots against giants, we nonetheless see that satire's weapons -- wordplay, irony, caricature -- can have surprisingly serious consequences.

From Cairo to New York, political humorists sound wake-up calls. Television news satirists such as Egypt's Bassem Youssef invite us -- sometimes at great personal risk - -to demand political accountability from our leaders. Satirical activists known as the Billionaires, among whom I have conducted anthropological research for nearly a decade, infiltrate U.S. public spaces to dramatize the role of big money in politics and our era's stunning wealth divide. What these jokesters in Egypt and the United States are telling us is profoundly serious.

Jon Stewart visited Egypt less than two weeks before the July 2013 ouster of President Mohamed Morsi and appeared in Cairo as a guest on Bassem Youssef's satirical news show, Al Bernameg (The Program). Youssef -- a former heart surgeon who is often referred to as the "Egyptian Jon Stewart" and whom Time Magazine named one of the 100 most influential people of 2013 -- had also been a guest on Stewart's show, and the two have become good friends. Their satirical news counterparts have multiplied in other countries as well.

In Egypt, as Stewart is acutely aware, satire takes courage. When Egyptian authorities arrested Bassem Youssef just a few months before Morsi's ouster, Stewart responded on The Daily Show. Pretending to speak directly to the Egyptian leader, Stewart said: "So, Bassem Youssef pokes fun at your hat and your lack of promised democratic reforms. What are you worried about? You're the president of Egypt. You have an army. He has puns and a show." In a tongue-in-cheek allusion to U.S. politics, Stewart continued, "Making fun of the president's hats and less than fluent English? That was my entire career for eight years."

Do political rulers really fear satirists? Even dictators may accept citizens' hatred but fear their laughter since it dramatizes the limits of propaganda and repression. At the same time, "If your regime is not strong enough to handle a joke," as Stewart quipped to Youssef during his June 2013 guest appearance on Al Bernameg, "then you don't have a regime."

Wealth in America: Catnip for Satirists

In the United States, television news satire is unlikely to land one in jail, though protesting in the streets sometimes does. To deflect hostility, or simply to lure the disengaged, some creative activists turn to elegant attire and parody.

Recasting protest as play makes it easier to address touchy topics like threats to democracy posed by skyrocketing wealth inequality and the expanding role of corporate and private money in politics. Public opinion polls indicate that most U.S. voters, whatever their political party affiliations, think that corporations have too much influence over public policy and that wealthy people should pay more taxes. Millions favor campaign finance reform and worry about lobbyists persuading legislators and regulators to weaken banking rules intended to prevent a recurrence of the Great Depression. Yet these ideas get no traction in Congress.

That disconnect between public policy and public opinion is catnip for satirists. Consider the Billionaires, a media-friendly national network of activists who don tuxedos, ball gowns, and tiaras, and pose as the ultra-rich under fictive names like Alan Greenspend, Phil T. Rich, Iona Bigga Yacht, Tex Shelter, and Ivan Aston Martin. Waving professionally printed signs declaring "Corporations Are People Too!" and "Leave No Billionaire Behind," they stage a glitzy form of satirical street theater in post office plazas on tax day, opposite grand hotels hosting political fundraisers, and outside national political party conventions.

Politicians' proposals to privatize Social Security into accounts managed by Wall Street prompted satirical Billionaires to march near the White House and the Capitol and proclaim: "Make Social Security Neither!" and "Feeling Entitled to Cut Your Entitlements!" and "Take From Main Street, Give to Wall Street!" 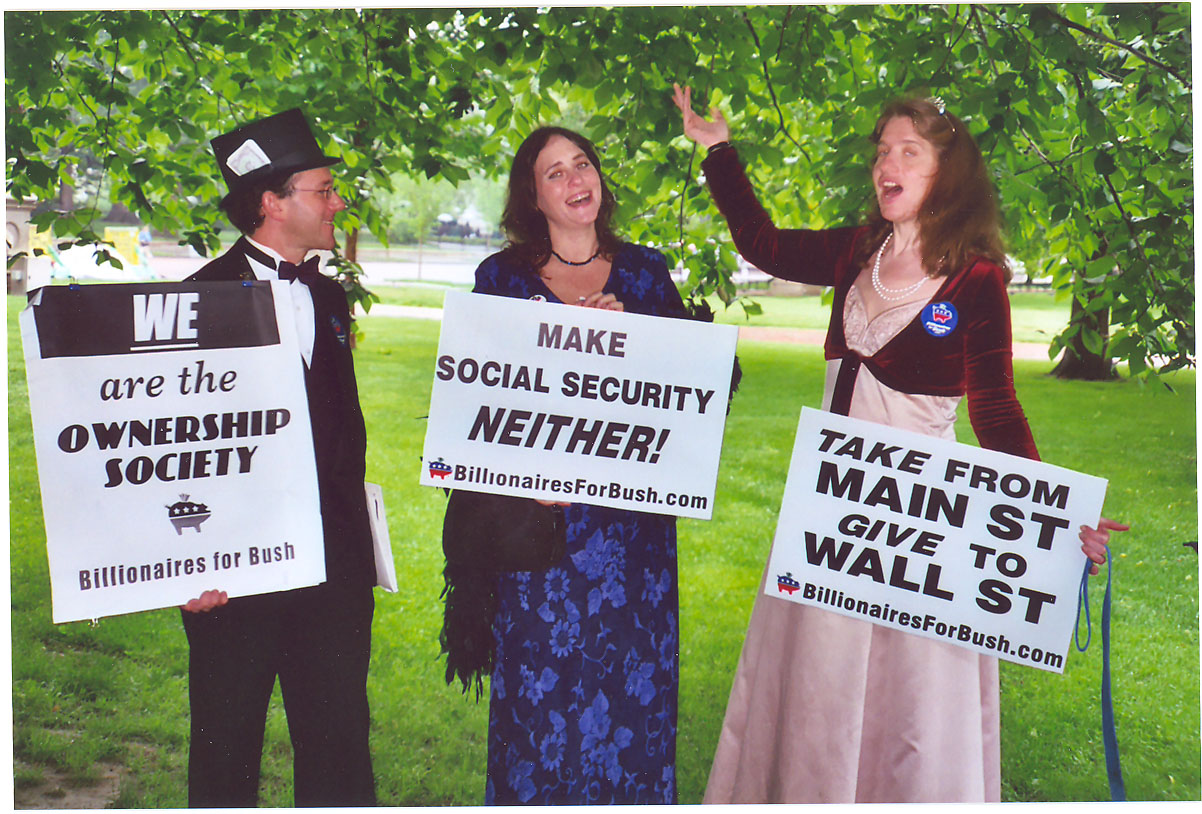 Billionaires for Bush, after participating with other organizations in march against privatization of Social Security, June 2005, Washington, DC. Photo by Angelique Haugerud

Even some real billionaires--such as Warren Buffett and Netflix CEO Reed Hastings--favor higher taxes on the wealthy. The satirical Billionaires, as well as actual billionaires, Nobel-Prize-winning economists (Paul Krugman and Joseph Stiglitz), anti-austerity protesters, satirical newscasters, and many other voices try to reframe the national conversation about repairing the economy and an electoral system marred by huge campaign donations that yield lopsided benefits such as tax loopholes for corporations and the very wealthy, windfall government contracts, and legislation that fails to protect consumers, the environment, public health, safety, and national economic stability.

Jon Stewart, Bassem Youssef, and the satirical Billionaires deploy ironic humor to query the powerful and to insist that elected politicians owe voters an honest accounting of their actions. In their words we can hear echoes of ancestral humorists: Aristophanes of ancient Greece, court jesters through the centuries, Jonathan Swift, Voltaire, and Mark Twain.

To resurrect the sense of fair play at the core of democratic ideals, we could do worse than urge our elected leaders and fellow citizens to listen to eminent economists and savvy satirists. If we cannot shake the complacency of the powerful, satirists will be even more galvanized by the public's deep distress about the health of the economy, media, and democracy. Hard times are good for satire.

Angelique Haugerud is author of No Billionaire Left Behind: Satirical Activism in America, Stanford University Press, 2013. She is Editor-in-Chief of the scholarly journal American Ethnologist and Associate Professor of Anthropology at Rutgers University. Professor Haugerud has carried out extensive research on cultural politics and the economy in the United States and East Africa.