It's not unusual to practice a big speech. But when getting ready to announce his decision to run for president on Monday, Sen. Ted Cruz (R-Texas) appeared to practice kissing his wife and waving -- something that didn't escape Jon Stewart's attention.

"I may owe Mitt Romney an apology," Stewart said Monday on "The Daily Show." "Even the Mitt Romneytron 3000 didn't have to rehearse waving and kissing."

But maybe kissing your spouse isn't as easy as it looks. "Daily Show" correspondents Jason Jones and Samantha Bee, who are married, came on the set to show Stewart what could go wrong when you don't practice kissing.

As for the speech itself, Stewart found that it wasn't without irony, as students from Liberty University were required to attend. Then, after listening to Cruz speak in favor of privacy, the attendees were asked by the candidate to take out their phones and send a text message to a certain number.

Or, as Stewart summed it up:

“Students at Liberty University were required to attend a partisan political speech where a small-government conservative who had just promised he would respect privacy rights told them if they cared about freedom, text your information to a mysterious address that collects your cellphone number for undisclosed purposes,” he said.

PHOTO GALLERY
11 Couples Who Forgot How To Kiss 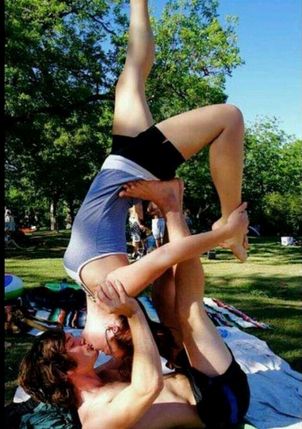