Teen sensations the Jonas Brothers (they of New Year's Rockin' Eve and dating Miley Cyrus) are proudly virgins, according to a new profile in Details:

On a quiet Friday morning in a dressing room at Madison Square Garden, the Jonas Brothers hold out their hands to show off their purity rings. Kevin, Joe, and Nick Jonas--the teen-pop trio who stand, at this very moment, on the brink of hugeness--wear the metal bands on their fingers to symbolize, as Joe puts it, "promises to ourselves and to God that we'll stay pure till marriage." Joe is 18. His ring is silver and adorned with a cross. "It actually ripped apart a little bit, just on the bottom, here, but I didn't want to get a new one, because this one means so much to me," he says. Nick, who is 15, says, "I got mine made at Disney World. It's pretty awesome." Kevin, at 20, is the oldest of the three, and while a punk-rock purity ring from Tiffany might represent the ultimate oxymoron, that's exactly what he's going for. His silver vow of abstinence is covered with studs. "It's pretty rock and roll," Kevin says. "It's getting banged up a little bit because of the guitar." 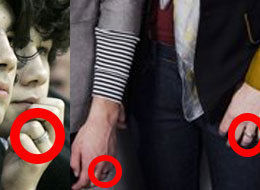