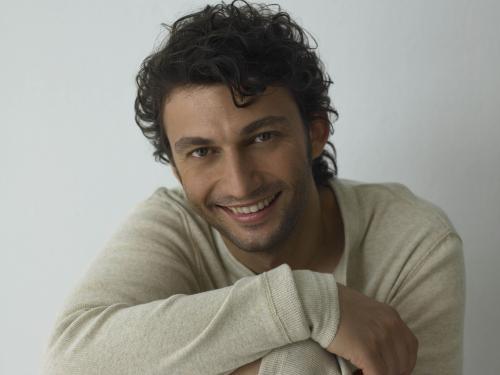 Sometimes you get the impression that Jonas Kaufmann is a tenor working his way into a Heldenbaritone. OK, that's an exaggeration, but the singer's dusky voice plays tricks on you before you realize his brighter tenorial overtones barely trump their subterranean brethren for ultimate categorization. Duff Murphy, KUSC-FM's effervescent opera buff, labels him a "lyric" tenor, but "spinto" is probably closer to the mark.

Though Kaufmann has sung Mozart, and more recently lyric French roles, his larger voice hasn't the effortless flexibility of a lyric tenor, and an emerging proto-dramatic direction has been his wont this season, as Florestan in Fidelio and Don José at La Scala's Carmen (under LAPO Music Director Gustavo Dudamel). Next month he undertakes the role of Siegmund (a baritonal tenor role sung here last year by Plácido Domingo) in Robert Lepage's new Metropolitan Opera production of Die Walkűre.

Tall and handsome with curly locks and sparkling eyes, he has the kind of movie star glamour that could corrupt a lesser performer into self-indulgence, but Kaufmann is too serious and ambitious an artist to let that happen -- at least not yet.

Last Friday at the Chandler Pavilion, the German tenor took a break from his dramatic roles on stage for his United States debut as a lieder recitalist. Under the auspices of LA Opera, Kaufmann's program featured songs of Robert Schumann and Richard Strauss. Opening with four selections from Schumann's Aus den Kerner-Liedern (songs of Kerner), Kaufmann initially took a few songs to refocus his voice to that of a recitalist in this more delicate material; with minor control issues and a crack or two, the downsizing adjustment soon settled him into a groove.

Poet Justinus Kerner's themes are often associated with melancholic mankind in an uneasy relationship with enchanting Nature, a pervading subject in nineteenth century German poetry, but the four poems here were tilted to the happier prospects of "going out into the world" on a journey of discovery. As such, and with the exception of the next work, they set the evening's tone of love's raptures over its ruptures.

More serious matters were explored in Schumann's Dichterliebe (A Poet's Love), to poems of Heinrich Heine. In subtle allusion and metaphor -- invoking the natural world's usual flowers, birds, and rivers (the Rhine), but mixed here with specific locations and artifacts like the Cologne Cathedral, the bridge at Mainz, and even a huge wine cask in Heidelberg -- Heine tells of a poet's love of a woman who initially reciprocates, but, deciding to marry another, induces the rejected poet to find a way to bury his sorrows. Schumann's finely etched musical miniatures infuse the equally fragile poetic images with acute emotion.

Kaufmann's voice was at both its most limber and controlled here, his delivery achieving subtle colorations in the work's atmospheric hothouses, as with his nearly vibrato-less "Ich hab' im Traum geweinet" (I wept in my dream), his plangent "Aus alten Märchen winkt es" (From old fairy tales beckons...), and the oaken darkness of his "Die alten, bösen Lieder" (the old, angry songs), summing up the poet's journey.

His achievement in Dichterliebe notwithstanding, Kaufmann came even more alive in two sets of Strauss songs that followed the interval: Schlichte Weisen: Fünf Gedichte von Felix Dahn (Simple Melodies: with five of the poems by Felix Dahn) Opus 21, and Vier Lieder, Opus 27, numbering 13 songs in all. Both are early works of this most optimistic and extrovert of composers. Strauss's poets in this instance anticipate love's bliss more than regret its loss. At the pinnacle of this singer's early maturity (Kaufmann is a very young-looking 41 years of age) the sentiments seemed natural to his public persona.

Something of the rhapsodic style of the first set of these Strauss songs, not to mention their symphonic piano accompaniments, released a superabundance of energy within Kaufmann, and we discovered new dimensions in his artistry: a long-winded breath control, his openhearted romantic fervor, a darkish head tone, and a kind of pure ecstasy in his delivery. 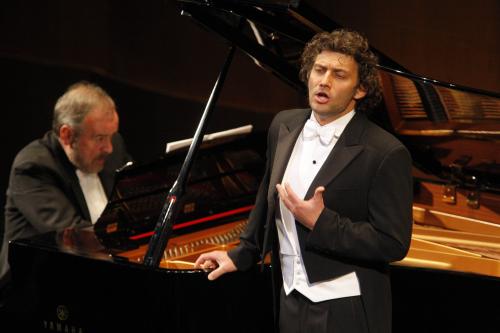 Piano collaborator Helmut Deutsch followed Kaufmann every step of the way, from melancholy to bliss in sympathetic partnership, fully earning his pay in the florid accompaniments of the Strauss songs, his well-articulated arpeggios flying up and down the span of the keyboard like so many effortless birds in flight.

A now energized audience swelled the large hall into a frenzy of enthusiasm in the final set, which included two of Strauss's greatest songs, "Morgen" (Tomorrow) and "Cäcilie" (Cecilia), with the latter's high B firm, but constituting most likely the tenor's upper range limit.

(Apropos, had Strauss never composed a tone poem or an opera, he would still be remembered as the last great proponent of the German Lied, with its origins in Mozart and Haydn, its extension in Beethoven, its high point in Schubert, and its noble continuity in Schumann, Brahms and Wolf, among others, right up to Strauss's last work in the genre, the Vier letzte Lieder of 1948, a tradition of almost two centuries.)

The energy field that enveloped both singer and his audience did not abate, even after five encores, three of them by Strauss ("Breit über mein Haupt", "Nichts", and "Zueignung"), the Franz Lehár evergreen, "Dein ist mein ganzes Herz", and finally Schumann's seraphic "Mondnacht" (Moonlit Night), announcing by gentle implication that it was finally time to go home.

But there was no going home for vast hoards of Kaufmann's admirers, the majority female, who waited in line over half an hour for his appearance in the Chandler's lobby to sign CDs. After this debut in the now somewhat esoteric genre of lieder, you could call Jonas Kaufmann the thinking woman's tenor. Also the unthinking woman's tenor. Or, to paraphrase Ira Gershwin, the tenor's magnetic appeal might apply to all the sexes from Maine to Texas.

Kaufmann's amber tenor is not as large as another dark-hued one we are well acquainted with in Los Angeles who has sung many of the roles Kaufmann now essays. Nor does Kaufmann have Plácido Domingo's metallic ring, but he uses his voice intelligently and his focused projection makes his respectably-sized voice seem huge in powerful moments. As heard in the more subtle repertoire featured this evening, he can also give colors to the chameleon. 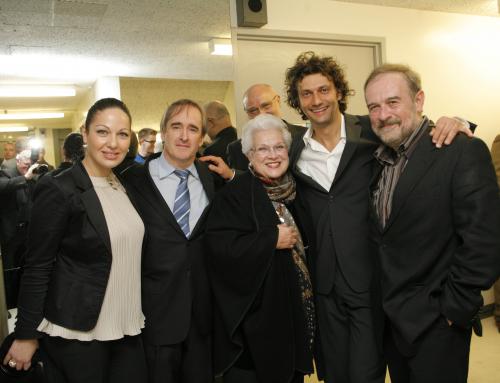 According to those in the know, Kaufman took a long time to discover and use his true voice. It is interesting that the teacher who ultimately enabled his successful voyage of vocal discovery was American baritone Michael Rhodes. It was also his triumph at the Metropolitan Opera, another American association, that after years of yeoman's work in provincial German opera houses earned Kaufmann new respect at home and enhanced star status around the world.

With this triumph in his U.S. debut in song literature in Los Angeles, Jonas Kaufmann now adds to his string of successes on the operatic stage a considerably enhanced reputation in the art of song.