The Washington Nationals shocked ﻿the baseball world on Sunday when ﻿the team's closer, Jonathan Papelbon, choked teammate Bryce Harper in the team dugout, leading to a fight between the two. Then MLB players as a whole did so once again afterward by anonymously ripping Harper, not Papelbon -- although publicly, some MLB players are simply shrugging this off as more common of an occurrence than outsiders realize.

The scuffle happened in the eighth inning of the Nationals' 12-5 loss against the Phillies at Nationals Park in Washington, D.C. Papelbon took issue with Harper after the 22-year-old MVP candidate﻿'s failure to run out a fly ball -- a "lack of hustle" play that's gotten Harper benched in the past.

Papelbon accosted Harper as he returned to the dugout, where the incident turned physical. The pair have been teammates for less than two months.

The Nationals' season in six seconds: Idiot closer tries to fight the MVP who's too good for this garbage. https://t.co/aYBIOnzfGL

Shortstop Ian Desmond pulled Harper away from Papelbon and the game continued. Papelbon went on to pitch the ninth inning -- something that manager Matt Williams says he wouldn't have allowed had he known the extent of the fight -- and allow five runs in the loss.

The Papelbon video is so bad. It's a running-down-steps sucker-punch on a guy with a bench behind him. He shouldn't wear that uniform again.

Seriously, who is Papelbon to tell the future MVP Harper how to act when they've been teammates for a minute. And then to attack him? A joke

I mean it's #Nats Fan Appreciation Day. Give them something they can appreciate, like the whole team chasing Papelbon out of DC.

Just saw the video of Papelbon and Harper. Harper definitely egged him on, but Papelbon went after him hard. Embarrassing all around.

Nationals manager Matt Williams was "livid" after seeing footage of the fight, but some active and former MLB players aren't upset at Papelbon, according to Fox Sports' C.J. Nitkowski. In fact, a few are siding with him, justifying Papelbon's actions and decrying Harper for not running out that fly ball.

"I would have done the same thing if I were Papelbon," one player anonymously told Nitkowski.

"Pap did what should have been done three years ago. Veteran players should be doing this across the league," another added.

"As a teammate, you always feel you have the right to say something to someone if you feel it’s wrong or hurts the club. Right after the popup is not the best time to call out a hitter," one said.

While MLB players agree that Harper's lack of hustle warranted a strong response from his teammates, they acknowledge that handling the matter inside the clubhouse and at a different time would've been more appropriate.

One player, however, was unequivocal in his assessment of Harper.

"He quit on his team after the fight, just like he does on popups."

@CJNitkowski loved the article CJ, Pap will take a beating for this from everyone who doesn't play the game. #EntitlementGeneration

Other MLB players have explained away Papelbon's behavior, with former Boston Red Sox teammate David Ortiz telling AP, "Everybody’s adrenaline and emotions are all over the place, and it happens."

San Fransisco Giants manager Bruce Bochy admitted that bust-ups like Papelbon and Harper's do occur, but usually it's behind closed doors, saying that it "happens a little more than you think — maybe not in the dugout.”

UPDATE: (1:47 p.m.) The Washington Nationals are siding with Harper here. Papelbon has been suspended for four games without pay by the club, they announced on Twitter on Monday afternoon: 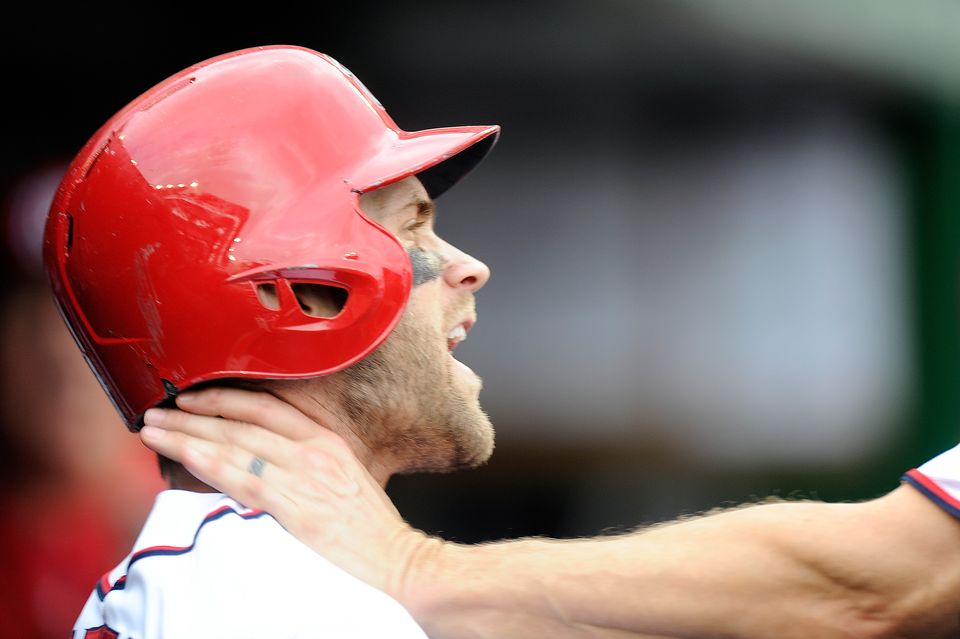 1 / 5
WASHINGTON, DC - SEPTEMBER 27: Bryce Harper #34 of the Washington Nationals is grabbed by Jonathan Papelbon #58 in the eighth inning against the Philadelphia Phillies at Nationals Park on September 27, 2015 in Washington, DC. (Photo by Greg Fiume/Getty Images)
Greg Fiume via Getty Images