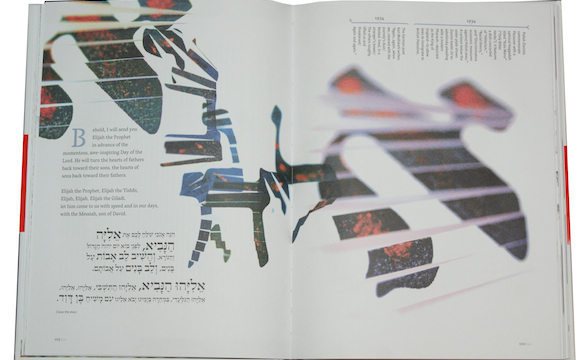 The Haggadah, the user's manual to the Passover seder, might be the world's oldest annually practiced ritual, and the story of the Jews' freedom from slavery in Egypt is, Jonathan Safran Foer said recently, "the best-known, greatest continuously read story" in book form. And yet, just like there isn't a singer who doesn't think he can cover a Bob Dylan song better than Dylan himself, the haggadah remains the book that everyone thinks they can improve on.

The Maxwell House Haggadah might be good enough for the White House, but at homes across the country there are any number of printed and self-stapled versions, including egalitarian, feminist and vegan versions with prayers writ special for women, children, Russian Jews, Ethiopian Jews and for the liberation of a wide variety of groups and causes, even those without benefit of 501(c)(3) tax-exempt charitable status. At our seders, the reading has been interrupted for comic plays, showings of Charlton Heston parting the Red Sea, and after-dinner rounds of comic songs, including the much-maligned version of "Brisket," sung to the tune of The Association's "Windy."

In other words, there is a good case to be made that we need a New American Haggadah (Little, Brown and Co.: $29.99). As luck would have it, one has just been published and edited with an introduction by novelist and anthologist Jonathan Safran Foer, as well as translation from the Hebrew by Nathan Englander, novelist and, not incidentally, a graduate of the Hebrew Academy of Nassau County.

As Foer explained recently at a Writers Bloc event in Beverly Hills, every detail was considered in this Haggadah's nine-year gestation period. That the book lies flat -- no accident. That it is of a certain size, to take importance on the table but not to crowd your neighbor -- done on purpose. No representational art (despite a commissioned but never-used work by R.B. Kitaj) -- a decision made because the visuals might detract from the text. More money spent on contributions made and killed than on those appearing in the book -- true. As Foer explained, the process of allowing the New American Haggadah to take form took time, and the final result, much to Foer's surprise, was more traditional than he would ever have imagined.

Similarly, Englander calls his translation "hyper-literal." Englander adds a grace to the translation not usually evident, as well as moments of subtle poetry, as when he translates what is usually read as "Our Lord, God" instead as "Lord, God-of-Us." The strength of Englander's translation is, in some ways, its greatest weakness -- it demands a more complete reading and a little more stamina and does not easily accommodate the fast-forward skipping and speed-reading of the haggadah that many have embraced as part of the tradition. 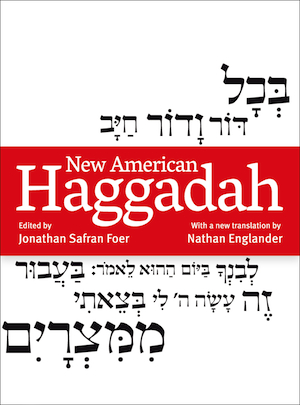 Alas, I truly wish I were more excited by this New American Haggadah. Foer is clearly a very thoughtful, intelligent person. His novels, such as Everything Is Illuminated and Extremely Loud and Incredibly Close, brim with inventiveness. There is something scholarly about him, and he harbors a genuine desire to create community, whether it be among a group of writers opining on the work of Joseph Cornell, non-meatarians or his fellow Hebrews. On the face of it, then, he seems a brilliant choice to commission and compile a New American Haggadah. However, the result is neither new nor particularly American -- it is as if Foer wrestled with the Haggadah, like Jacob wrestled with the angel, and the Haggadah won, repeatedly. To cite but one example: When it came time to name the book, possibilities abounded (i.e. why not The Brooklyn Haggadah in honor of where Foer lives), but the final choice, New American Haggadah, although literally correct, is strangely bland.

Or let me put it another way: Imagine you had an old house that had been in the family for many generations -- that you thought could, in so many ways, be improved upon. So you consulted the best architects and designers and you took the house apart, tore it down and started over. At each crossroads, when faced with a choice between the suggestions and the original, you found yourself, much to your surprise, siding with the original. In the end, when the house was rebuilt, your friends expressed surprise, saying: "Where's the new house? This is the old house." Not much different and no more serviceable than the original (and in the case of this Haggadah, perhaps less usable as it contains no transliteration for those for whom the mumbling of ancient words is incantatory).

I don't want to give the impression that this New American Haggadah is not without its pleasures. The commentary is intelligent (Rebecca Newberger Goldstein on Spinoza's seat at the table), tough (Jeffrey Goldberg on the Tenth Plague), learned (Nathaniel Deutsch on Exodus' most theologically shocking moment) and at times subversive (Daniel Handler, aka Lemony Snicket, on the four types of parents). It runs at a 90-degree angle to the Hebrew -- and offers not so much exegesis as discussion points for seder attendees. Although the commentary is at times engaging, entertaining and thought-provoking, there is never as much of any of those as one might have expected or wanted. There is a timeline across the top of the book that is worth reading and the graphic design of the pages reflecting the Hebrew typography of each time period is beautiful in its own way; but, again, none of it matches the drama of the story being told. Which, according to Foer, is the point. The story, the text, comes first.

Without the Haggadah, the seder is merely a Jewish Thanksgiving dinner whose emphasis is less on ritual than on family, more about side dishes than the main event, more about the heavy meal and the four glasses of wine than the time-bending empathetic command to feel as if we, ourselves, were slaves in Egypt.

Although the New American Haggadah may create a whole new gift category -- the seder present, thereby selling many copies -- my prediction is that few will use it instead of the family Haggadah. More likely, this Haggadah will be used as a supplement -- a reading from Lemony Snicket here, a passage read aloud there -- and will become yet another prop in the customization of the seder. Which is, in and of itself, part of the long tradition of Haggadahs and Passover seders.

As for us, this year we're ditching the comic play, opting instead for "Passover Jeopardy." Our seder hosts will be overjoyed, no doubt, to receive their copy of the New American Haggadah. I may even read from it in between the Hebrew and the Maxwell House versions. More likely, I'll be saying: "Pass the charoset, I'll take Moses for $400."