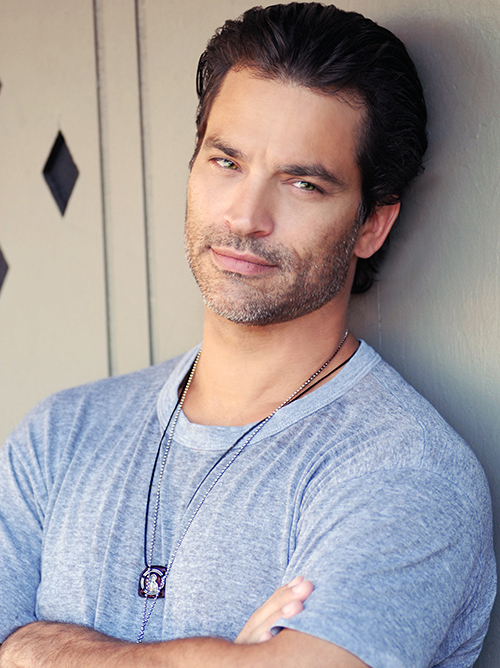 Johnathon Schaech is best known for his role in the Tom Hanks film, That Thing You Do. The memorable film reminded us all of the 1960s, a perilous time in the country -- ironically also a time that produced some of the greatest music in history.

People are not defined by their career or career aspirations. Johnathon aspired to be an actor and he made that happen. He's proven himself and his skill -- having been cast with some of the strongest actors the modern-day cinema has to offer, he has proven that he can hold his own with the heavyweight A-listers.

This conversation with Johnathon proves that anyone and everyone is more than the sum of what the public sees them as. Sometimes things and people are not what they seem -- or what the media paints them out as.

From the very beginning, your career, both in front of and behind the camera, has been fascinating, to say the very least. You have worked with the crème de la crème of actors -- some of the very best A-listers out there. That's something that, yes, a lot of actors and actresses can say that they have to their credit but not with such positivity as you have. It's really a credit to you because it means you can hold your own with these actors who have such an immense presence.

You know, Bryan -- that is very true. I hadn't given it much thought until this moment, but yes, I have worked with the best of the best.

It's interesting. How do you or how does one approach working with a name like Tom Hanks? He directed you in That Thing You Do, a phenomenal film in which you did a great job. I imagine that there's two ways to go about it -- "well, I'm auditioning to work with the guy who starred in Bossom Buddies." That would make you feel confident, right? Realistically, when it comes to Tom you've got to think of Big, Philadelphia, Forrest Gump -- that might make you a little nervous, right?

Thank you for your kind words, that means a lot. When I did get to work with Tom, you can imagine -- I was at that testosterone-driven point in my career where I wanted to do great work and I got hired by a guy that just won two academy awards in a row. Once you work with him, he's a totally great guy, it's just getting to that point is what is daunting.

Well, I read the script -- at that point the obstacle is finding out what Tom as a director wanted. He knows what he wants, but you have to bring your A-game to figure that out. I knew that I had to bring something to it that would make me shine. I had to bring that character to life in a way that would best help to tell that story.

How often are you recognized for being in that film? I'm assuming a lot, it had a certain something to it that was quite unforgettable.

People recognize me on the street for all kinds of different things that I've done. That Thing You Do remains to be my favorite film in which I played my favorite character. That role is the one that I'm most recognized for.

What adds to how special that film and its characters are is the fact that it took place in a decade where so much was going on.

You're absolutely right, that was a very important time in a lot of people's lives. The music, the TV shows, the films, the controversy -- it's all tied us to a time that changed our lives and the world irrevocably.

Once again, you're in a great film that just opened recently -- Phantom. Once again, appearing on the screen alongside some of the greatest character actors of our time. Ed Harris, David Duchovny, and Lance Henriksen.

Again, Bryan, I'm blessed. Wow! When I'm doing a scene with Ed or David, it's damn near impossible not to get lost in what's going on in their face and in their eyes. They are phenomenal actors, truly a force to be reckoned with. Phantom follows some of the best submarine cold war films made. There's just so much tension, I can't even describe it -- you have to see it.

One thing that I noticed that stood out was the media attention on your personal life. In particular, your relationships. For some reason, I get the impression that these stories paint you out to be a heartbreaker. I wanted to give you the opportunity to open up about that. In this story, how is it that you wish to address this belief of you?

My life is not about the past, it's about where I'm going and how I'm going to get there. Where I'm going is a place of integrity that my parents instilled in me. My parents have been together for 50 years. I have always been very dear to my God, and I've always tried to remain true to him and to who I was with. Circumstances didn't end up working out the way I hoped or thought they would. It just didn't happen that way. Everyone involved in all of those articles was broken-hearted. No one more than the other, and there was a lot of pain and a lot of reality. Christina and I are friends and are still soulfully connected. We have forgiven each other and come to an understanding of what we went through. I'm very grateful that she has made it through all of her hardships. Equal to her hardships, are mine. In my life, I'm just looking for that life of integrity that my father had. I have a good heart, I'm not a heartbreaker.

The road to hell is paved with the best of intention. Is it safe to say that sometimes there is just something missing? That something is often something that's more than meets the eye.

I never spoke out about it, I don't nor have I ever wanted the gossip columns to dictate the direction of my life. The nature of what I do for a living has always gotten in the way of whoever it is I've been with. Having a career where you are never with a person can lead to those things. It's completely different than my mother and father. My father would go to work and try to survive everyday just to get home to my mother so they could be at each other's side. That's what I want.