CEOs may come and go, but not every one chooses to tweet their departure.

Sun CEO Jonathan Schwartz announced his resignation via Twitter, becoming the first Fortune 200 head to do so, according to the New York Times.

Today's my last day at Sun. I'll miss it. Seems only fitting to end on a #haiku. Financial crisis/Stalled too many customers/CEO no more

The New York Times also notes that during his tenure at Sun, Schwartz as an avid user of social media tools:

Mr. Schwartz has been fond of using the Internet as a soapbox. At Sun, he became the first chief executive of a major company to put up his own blog. Mr. Schwartz also pushed the Securities and Exchange Commission to put blogs on equal footing with press releases and filings when it comes to disclosing critical business matters to investors.

On January 28, Schwartz tweeted out a link to what he said was 'likely my last blog at Sun...' (Read Schwartz's blog entry, 'Where Life Takes Me Next...' here.)

In it, he writes,

Greg Papadopoulos, one of the brightest people I've ever known, once made a very interesting statement - all technology ultimately becomes a fashion item. It was true for timekeeping, and it's definitely true of computing and telecommunications. To that law, I'd like to add a simple corollary: the technology industry only gets more interesting. It's been true my entire life. 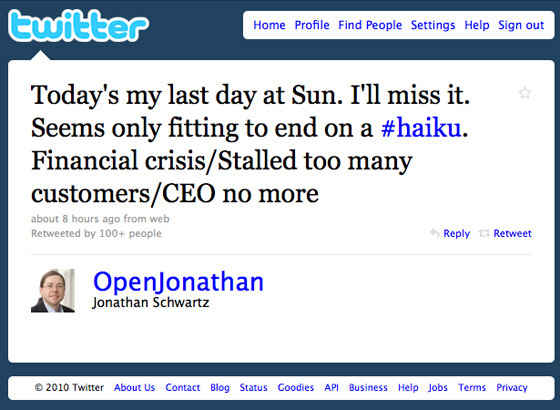