Standing in the freezing cold on the side of an Iowa road, Jonnie Wright wore a sign that asked passersby for money. It was Christmas Eve and he was on a mission to spread some holiday cheer.

A businessman, Wright is neither homeless nor poor. But there he was, on Dec. 24, dressed in a shabby sweatshirt and asking people for some cash or food.

Wright had a heartwarming plan up his sleeve. 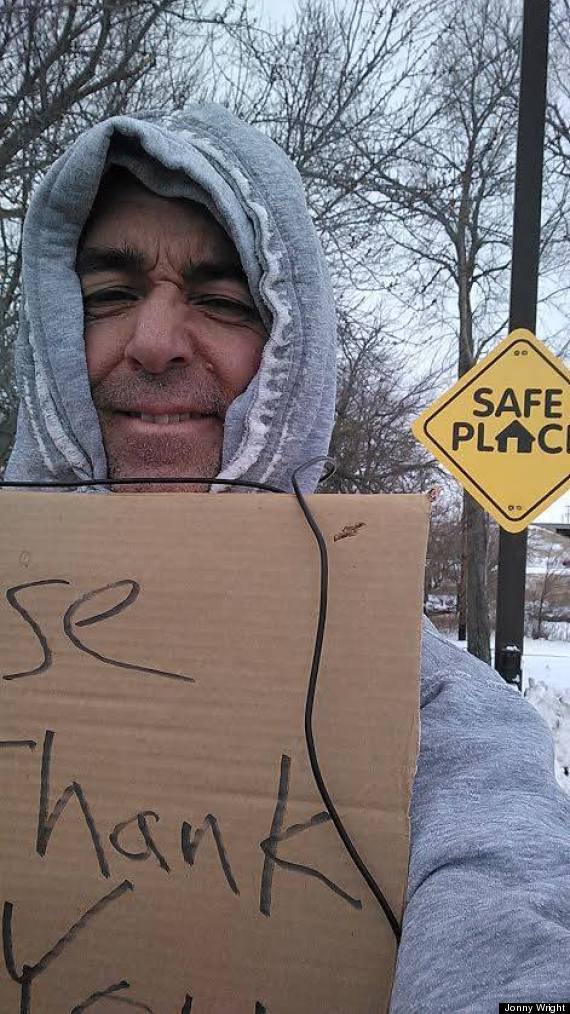 Whenever someone stopped to give him something, Wright handed over a gift of his own. It was an envelope -- with a letter, and either a $10 or a $100 bill inside.

Merry Christmas and thank you so much for your very kind and thoughtful donation!

I live in Des Moines but I am not homeless or destitute or without a job. Instead I am here to give thanks for the many blessings in my life by paying them forward and honoring you and others who give… Please take the money in this envelope and keep it, spend it, donate it, pay it forward, whatever your heart tells you to do. 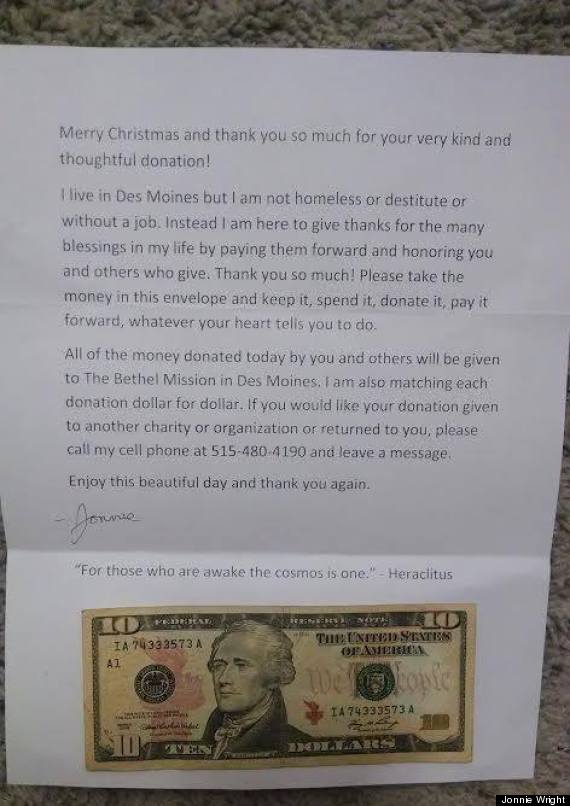 According to a post on his Facebook wall, Wright said he spent about four hours on Christmas Eve panhandling in the cities of Johnston and Ames. In total, he says he gave out 50 envelopes (five of them with $100 bills and the rest stuffed with $10 bills) and collected "$363.02, 3 pepperoni sandwiches, 2 donuts, 1 pack of M and M's, 1 apple and 1 pair of gloves."

"Across those four hours, wearing inadequate clothing in 12 degree temps, shivering with head bowed, standing in front of strangers, afraid to look them in the eye and silently begging for their help I felt helpless and cold and humbled and ignored and broken -- and proud and grateful and thrilled and honored and loved," Wright wrote in his Facebook post. "The power of human kindness and generosity carved a permanent place and space in my heart and I will never forget their loving faces and gentle touch as they placed their hard-earned money in my hand."

The experience was "transformative," Wright told The Huffington Post over the phone Tuesday, as he felt firsthand the "helplessness and hopelessness" that comes with poverty.

Among those who donated money to Wright was Rob Taylor, an Iowa state representative.

“His action was one of the kindest and most Christian thing [sic] that I’ve ever witnessed,” Taylor, of West Des Moines, told TheIowaRepublican.com. “I left Jonnie a voicemail yesterday that [my wife] Christi and I intend on donating to an unnamed Christian charity because of his letter and the $10 he gave to me. What he did yesterday brought tears to my eyes. The world needs more Jonnies!”

Taylor wasn't the only person moved by Wright's Christmas mission.

As his story goes viral online this week, hundreds have taken to social media to thank Wright for his generous spirit.

"Touching hearts of others is the best Christmas you can have and the ones they will always remember," wrote one Facebooker on Christmas Day. "God Bless you for this act of kindness sure wish there were more person[s] in this world that could do this instead of judging."

Wright told The Huffington Post that he's been "humbled" by the outpouring of love and gratitude that his story has triggered.

"I never ever imagined that it would have the reach that it did, but it seems to have touched something in people, I can't even explain it," he said, adding that the whole experience has been very "emotional" for him.

On Christmas, Wright -- who told CBS News that this plan had been on his "bucket list" for a while -- took the cash he collected, added hundreds of his own money, then donated $1,000 to the Bethel Mission, a men’s emergency shelter in Des Moines.

"If everyone (me) reached out beyond themselves (me) and stepped out of their (my) comfort zones... we would change the world," wrote a Facebook user on Dec. 26 after learning of Wright's donation.