JooYoung Choi has a tendency to speak about the fictional universe she’s invented as matter-of-factly as she would the facts of her real life.

The 32-year-old, Houston, Texas-based artist sets most of her ever-expanding body of paintings and video art on a “parallel planet” she calls "The Cosmic Womb.” The planet -- which has its own Wikipedia page -- plays home to imagined races (called Tuplets), invented antagonists (the Munoes, or “evil octopuses that feed on negative thoughts”), and even a television station, Cosmic Womb TV.

“Pleasure Vision, the Spirit of Television and Sight and Sound, transmits TV to everyone in the Cosmic Womb,” Choi described gravely in a phone conversation with The Huffington Post. 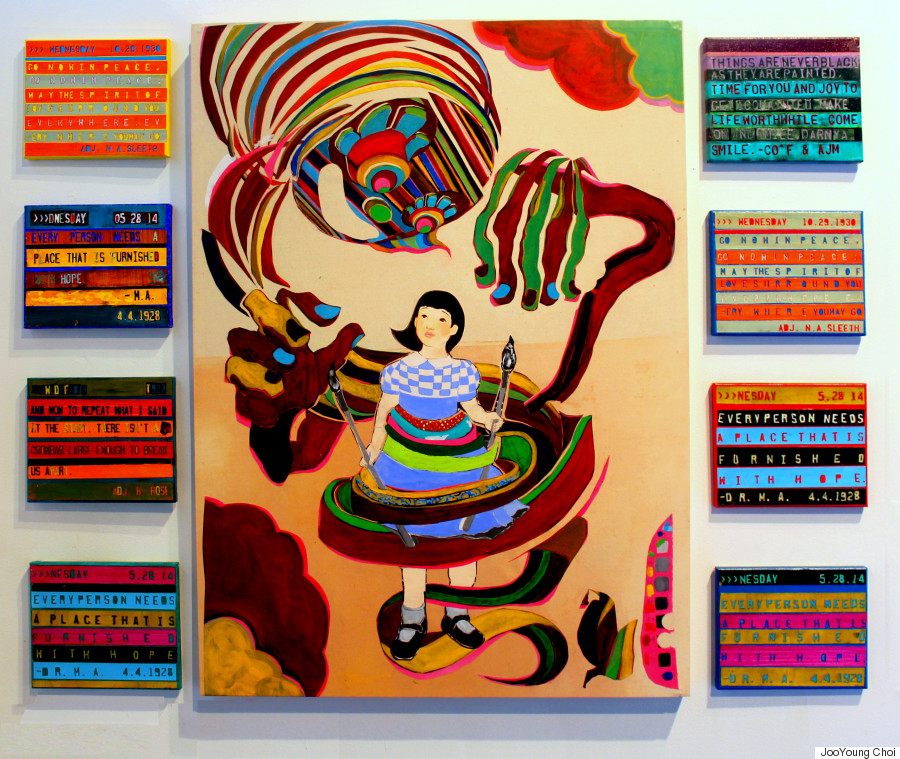 "Thanks For the Cosmic Knowledge," by JooYoung Choi

Initially created as part of her MFA program at Lesley University in Massachusetts, Choi has been expanding her notion of the Cosmic Womb since 2012. But its roots lie far deeper in her past. Growing up in an adopted American family, Choi was one of a few dozen Asian-Americans in her hometown of Concord, New Hampshire.

“Three years before I was adopted, the 1980 census stated that my hometown had about 60 Asian people in it, out of a population of about 30,400,” she explained. “I only knew a small handful of adopted people. Often I was reminded by other children that I looked 'different' or I was so 'weird'… As a child, I used popular media and art to make sense of my situation of feeling and looking so different than those around me.”

Throughout her childhood, Choi collected a motley crew of media figures -- from Kristi Yamaguchi to Lotus Blossom of the "Teenage Mutant Ninja Turtles" -- to serve as a surrogate “tribe.” Choi met her birth parents in 2007 and 2008, but issues of “adoption, race, systemic oppression, loss and liberation” continue to influence her work, she says.

The tendency to find meaning in disparate characters, and the importance of visual media, would later inform her creation of the Cosmic Womb. As would a book called The Primal Wound, by Nancy Newton Verrier, which addresses the emotional complications of adoption. The name "Cosmic Womb" is partially derived from the Korean word for womb, which translates literally to "baby house." 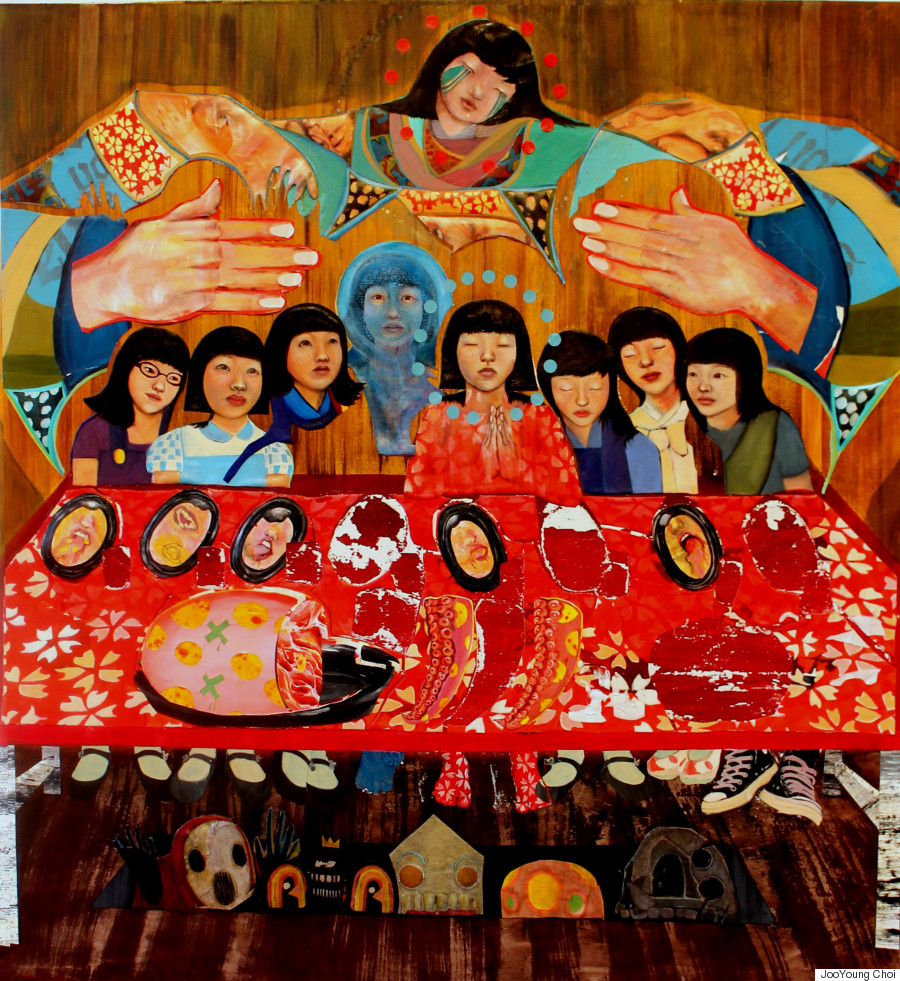 "The Sacrifice of Putt Putt," by JooYoung Choi

"I decided that if there is a possible primal wound that affects adoptees, there must also be a Cosmic Womb for them to heal [in]," Choi added. "The idea that Koreans saw the womb as a house or location versus an internal organ interested me... I thought, what if my art could provide a place for the healing of loss, for the things that we lose in life, or have never known or have been forgotten?"

Her comprehensively imagined universe differs radically from life on Earth. For starters, the Cosmic Womb is populated mainly by beings Choi calls "Tuplets" -- humanoids who resemble East Asian girls (humanoid boys are rarer, she says). Most of the animals are male, however, and they can talk. The Tuplets of the Cosmic Womb sometimes have superpowers, and embark on adventures enshrined in Choi's paintings. Some of these characters are imbued with names and backstories, such as C.S. Watson, Choi's proxy in the Cosmic Womb -- a former denizen of Earth, reborn on the distant planet.

Oh, and the leadership of the Cosmic Womb is distinctly female: Choi's intricately imagined mythical world is ruled by the compassionate Queen Kiok (sometimes played by Choi in the Cosmic Womb video art), and its spiritual realm is peopled by two goddesses, Pleasure Vision and Quan Yin, the Goddess of Compassion. 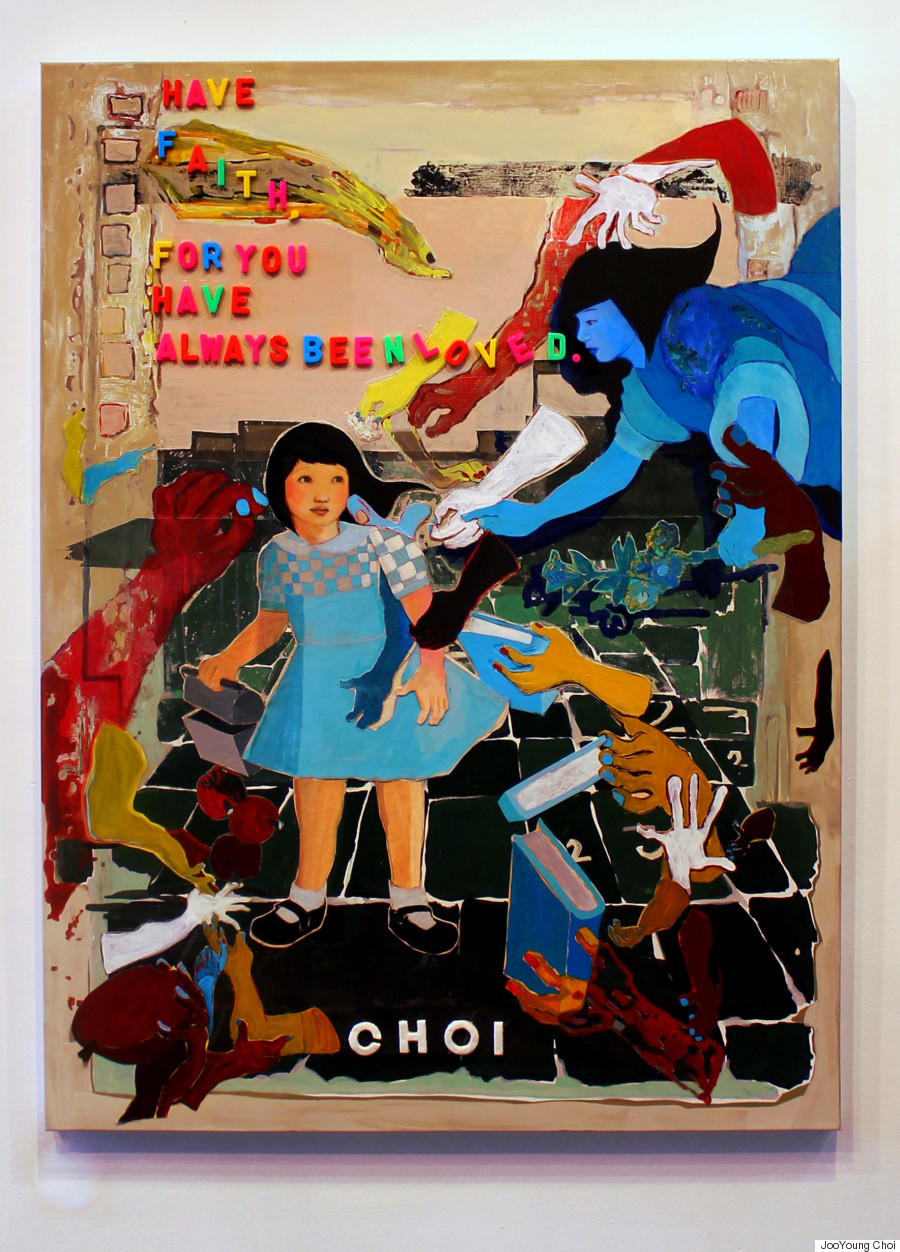 "Have Faith, For You Have Always Been Loved," by JooYoung Choi

"The major difference is that the Cosmic Womb is a safe haven for all the forgotten dreams, and people and places and ideas that we on Earth have abandoned," Choi explains. "For example, the version of Pluto that is still regarded as a planet can be seen with a telescope from the Cosmic Womb. When the brontosaurus and triceratops were said to 'never exist,' they emerged out of the waters of the Cosmic Womb, to start their new lives in a place where their existence would be acknowledged."

The East Asian faces that fill Choi's canvases are part of an effort, she says, to increase the visibility of Asians in ways that she did not experience as a child.

“In part, I make work first for that younger version of me that never saw an Asian adult on 'Sesame Street,' who never saw an Asian face in a stained glass window, and feared maybe people who looked like me didn't get to go to heaven,” Choi explained. “But this concept of the child who cannot see herself in the mirror has grown into a broader purpose of creating work that uses narrative, imagery and sound to address an issue most humans have faced in their lives: feeling invisible, forgotten, displaced or lost. “

The national motto of the Cosmic Womb -- “Have Faith, For You Have Always Been Loved” -- is part of Choi’s way of addressing her troubled past self. Through the parallel planet, she mitigates the oppression, rootlessness and sorrow she encounters on Earth.

In person, Choi wears enormous eyeglasses and a chipper mien. You might find her engaged in enthusiastic conversation in her smoky, tremulous voice, perhaps carrying at least one of the 10-12 puppets she uses in her video work -- moving images that eventually become the stuff of Cosmic Womb TV. The childhood roots of her artistic motivations are readily apparent in these videos, which take the familiar tropes of children’s entertainment and add a hefty dose of the surreal -- with Choi’s engaging presence as an anchor.

Choi hopes to incorporate further elements of nostalgia into her current work, planning to create 1980s-esque dolls in the style of Rainbow Brite, another childhood companion. Despite the bright tones and childlike elements of Choi’s work, her paintings often seem to grasp at darker themes, depicting exposure, peril, and ecstasy. For Choi, there is no contradiction between the bubbly, bright aura of the Cosmic Womb and the complex themes addressed in her work.

“As an artist I have a choice to make,” she told HuffPost. “I can focus on targeting a specific demographic with my work, or I can reach out to the child in all of us, that miraculous stage in human development where we relied on imagination and creativity to make our little way in a big world of unknowns. The part of us that was unashamed to believe in the fantastic.“ 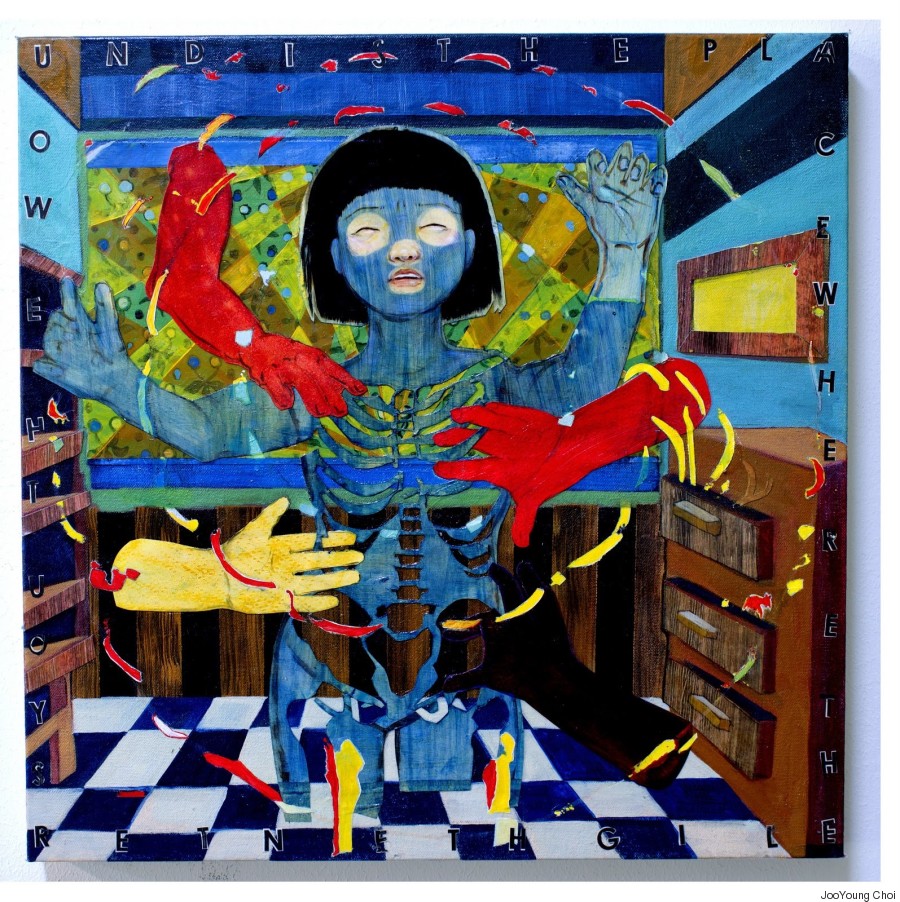 "Blue And The Helping Hands At MC Customs Body Shop," by JooYoung Choi