At least 15,000 protesters from across the country flocked to the main street leading to the Husseini mosque in downtown Amman after Friday prayers and chanted: "Listen Abdullah, our demands are legitimate" and "People want to reform the regime."

Hundreds of young bearded men also chanted: "We are free men, not slaves" and "Freedom...Freedom", while others carried placards or banners denouncing corruption and the pervasive role of the security apparatus in daily life.

The "Friday to Rescue the Nation" rally was called by the Muslim Brotherhood, the largest opposition party, to push for broader representation and a more democratic parliament.

The protest went off peacefully after loyalists with links to the security forces called off a planned counter-rally at the same location, defusing tensions.

The demonstration included some of the tribal opposition that has been more vocal in its personal criticism of King Abdullah's rule than Islamists who seek broad political reforms.

Sheikh Hamam Said, head of the Muslim Brotherhood in Jordan, said a move by the monarch to dissolve a rubber-stamp, tribal-dominated parliament on Thursday to set the stage for elections expected early next year did not go far enough.

His party will not go back on a decision to boycott future elections under the current political system, he said.

"What we are demanding is real reforms and not illusory reforms and finding an election law that is different from this one. This one is rejected," Hamam said.

The Islamists say electoral laws passed last July are tailored to curb their influence by drawing constituency lines in favour of sparsely populated, pro-government tribal areas that have a majority of parliamentary seats.

The electoral law keeps intact a system that marginalises the representation of Jordanians of Palestinian origin, whom Islamists rely upon for their support, in favour of native Jordanians who maintain a tight grip on power and are the backbone of the powerful security forces and army.

A boycott by the only effective opposition, the Islamic Action Front (IAF) political arm of the Muslim Brotherhood, is threatening to damage the legitimacy of any future parliament.

Jordan has had nearly two years of peaceful street protests by Islamists, tribal figures and leftists, inspired by the Arab Spring uprisings, but they have focused on reforming government and limiting King Abdullah's powers rather than ousting him.

Although Islamists have growing support in outlying tribal areas, they have stronger support among the Jordanians of Palestinian origin, many of whom reside in wretched refugee camps and face increased daily discrimination. Jordan's political elite has watched with concern as Islamist parties in Tunisia, Egypt and Libya have gained ground, seeing their rise as a sign of the future empowerment for the Jordanians of Palestinian origin, a majority of the population, who are grossly unrepresented politically but whose business elites are the backbone of the economy.

Politicians say the monarch, who has ruled since 1999, has been forced to take only cautious steps towards democracy, constrained by the tribal power base which sees reform as a threat to its political and economic benefits. (Reporting by Suleiman Al-Khalidi; Editing by Michael Roddy) 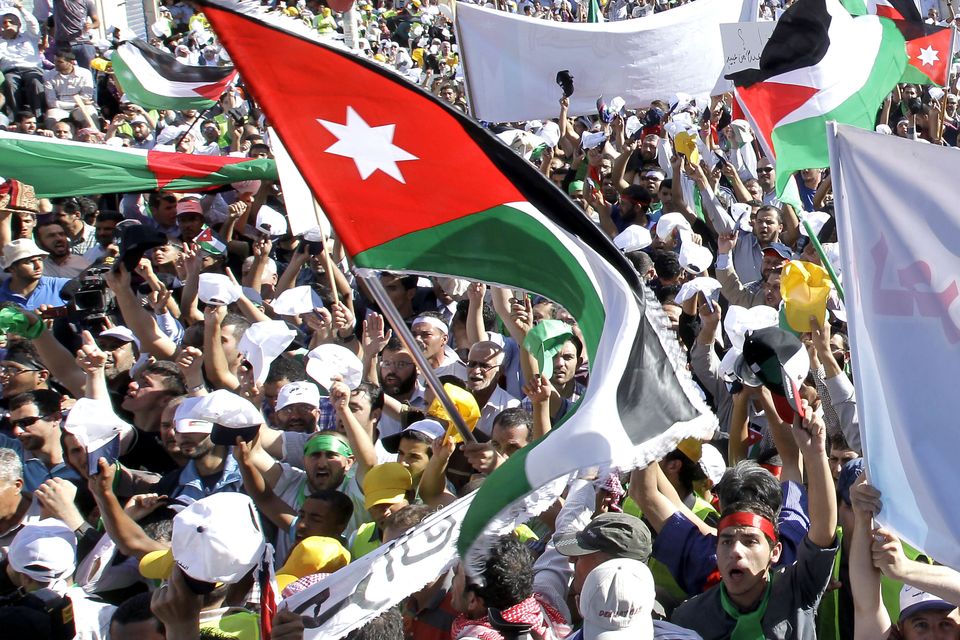