This post originally appeared on artnet News. by Eileen Kinsella 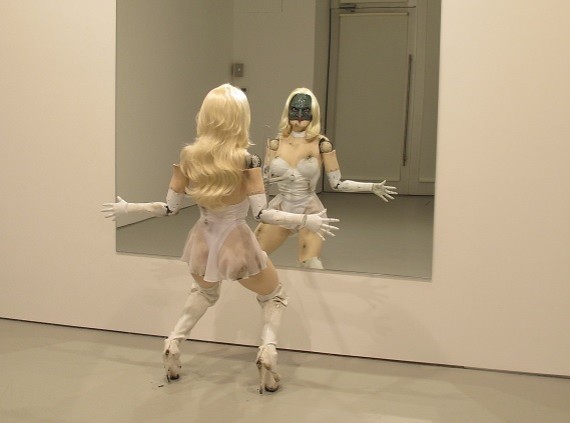 We heard the news at a press luncheon at Le Cirque, courtesy of the Broad Museum in Los Angeles, at which museum executives also unveiled updated details about the innovative architecture and building construction, as well as the museum's planned opening, now set for Fall 2015 (it was originally set to debut this year but there were construction delays and no specific date has been issued yet). Broad, who could not attend the luncheon due to recent back surgery, instead addressed the crowd on a live-feed video-cast from LA.

Female Figure dances to pop music and locks eyes with visitors, who are allowed into the room one or two at a time. It has even inspired a parody, the Mini Sexy Robot Doll for Your Desk, created by artists Jen Catron and Paul Outlaw. The art duo sent the toy replica to our office, and we gave it a test run (see: "In Zwirner Parody, Artists Offer Toy Robot Stripper").

With the acquisition of the LA–based artist's work, the Broads' collecting strategy seems to have shifted lately to put a priority on works that encourage visitor engagement. They previously announced the purchase of Yayoi Kusama's immersive Infinity Mirrored Room—The Souls of Millions of Light Years Away (2013), which was also shown at Zwirner this past winter as part of the exhibition "I Who Have Arrived in Heaven," and which had visitors lined up outside in the brutal cold for hours.

Other major additions to the Broad collection are Icelandic artist Ragnar Kjartansson's much-lauded video installation The Visitors (2012), which was shown at New York's Luhring Augustine gallery in 2012, and William Kentridge's intriguing and sprawling sculptural video work The Refusal of Time (2012), which was recently on view at the Metropolitan Museum of Art.