Jordyn Wieber will miss the All-Around Final in women's gymnastics at the London 2012 Olympics.

In a surprise turn of events, the defending world champion and one of the overwhelming medal favorites placed behind teammates Gabby Douglas and Aly Raisman on the American team, which breezed through qualifying.

"You try to find words because it's almost like someone passes away, and what do you say?" Martha Karolyi, the U.S. women's gymnastics team coordinator, told NBCOlympics.com. "But the fact is the fact. She did her best and she was edged by her teammates."

According to the St. Louis Post-Dispatch, Raisman didn't initially believe that she had overtaken Wieber with her floor exercise performance.

"Really? Who told you?" Raisman said to her coach, per the Dispatch. "Where does it say that?"

Wieber registered a score of 14.666 on her floor program (via @USAGymnastics) and was slightly ahead of Raisman and in line for one of the two U.S. berths in the All-Around Final. However, Raisman posted a 15.325 to punch her ticket and eliminate Wieber.

Wow, this is stunning. Defending world AA champ Jordyn Wieber has just missed the AA finals. This 2 per country rule HAS to finally go.

Although Wieber's score of 60.032 was the third best overall score during qualification, she will not advance because the Olympic gymnastics format only allows two competitors per team to advance.

Raisman and Douglas for US AA Finals, OMG! Wieber misses AA by .126. Heart breaks for Jordan, so happy for Ali and Gabby. #yahoosports

"It was hard [watching Aly on floor] because of course I wanted that spot," Wieber told Inside Gymnastics, highlighting some of the complex intra-team dynamics created by the two-per country rule. "But I also wanted Aly to do her best for the team."

Meanwhile, Jordyn Wieber's out of the all-around final and crying her eyes out down there. To journalist after journalist. Mortifying.

Although the 17-year-old Wieber is widely considered among the top gymnasts in the world, she was also edged by Douglas at the Olympic Trials.

"I think to have a bit of friendly rivalry in the competition is important," Wieber said after Douglas' win, via The Guardian. "It just keeps pushing us a little more."

UPDATE 7/29 1:58 p.m.: Not long after her defeat, Wieber took to Twitter to thank her fans and support her teammates.

Thank you all for your love and support. I am so proud of our team today and I can't wait for team finals!! 💗 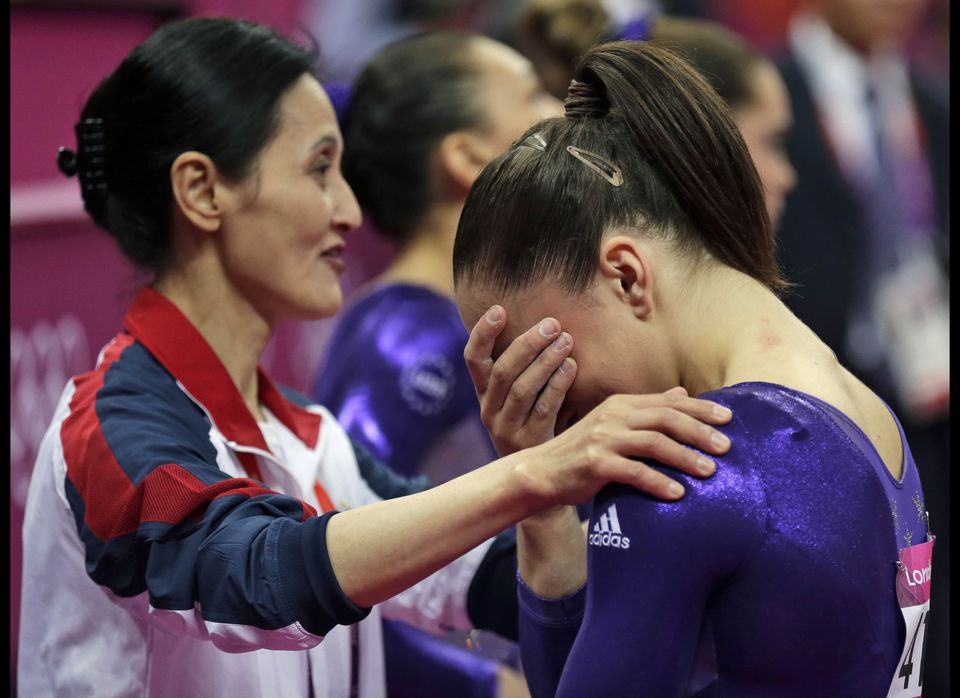