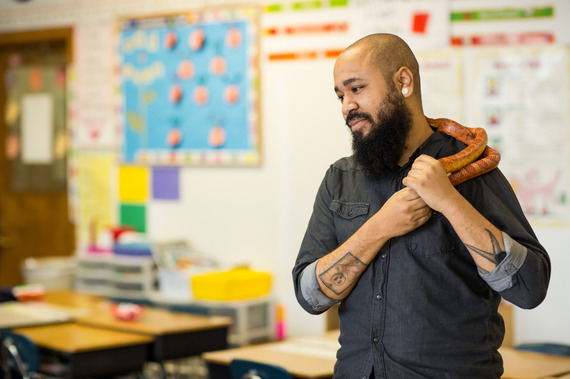 Maybe I look strange to them -- I have a beard, nose rings, tattoos and sometimes, I paint my fingernails black. But they see intelligence that looks different. Intelligence doesn't mean a suit and tie; it means having a conversation.

"I never thought that I would be professionally involved in education.

Initially, when I applied to my school, I was coming in for a maintenance position -- a janitor. During the interview, they asked if I would be more interested in a teaching assistant position. It was an unexpected surprise, and I said yes, because I wanted to work with kids. It's been 11 years now.

Interacting with the students was the easiest part. I remember realizing the necessity of having to plan but remaining flexible enough to know when to veer from it. I brought out-of-the-box ideas and projects that I felt would hold a longer lasting memory in their minds. Transitioning from my barista/waiter/senior care/roof shingling jobs wasn't that difficult -- I was used to many moving parts and thinking on my feet. Sticky high-fives from children in passing may have been a slight adjustment, but the kids are the best part. It sounds cliché, but it's the truth." 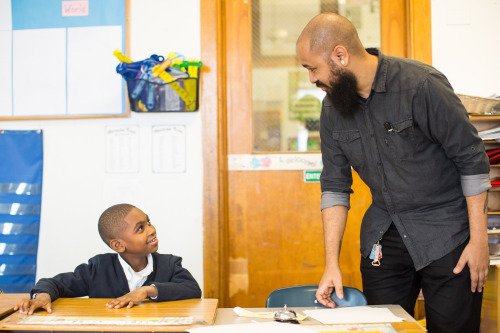 Connection is a two-way street.

"This year, I've had a really challenging group. The kids have a tough time managing their emotions. Usually, I'm the person they send those kids to, because I'm strong and disciplined -- but also because I try to talk to the kids and get to know them.

Their behavior doesn't come from nowhere. I've had students whose families have been killed or have been victims of violence. These kids are seven years old, and they're thinking about life and death situations. How am I expecting them to understand a standard if I haven't spoken to what's happening in their lives first? If they don't have an outlet or ability to channel what they're seeing, it's harder.

The students find that safe space at school. They know that I care about them and that as a class we are trying to make the world better -- so they're more open to learning because they're trying to better themselves. I try to get them to buy into their words, so that they see they have something special to offer. Their grades are coming up, and they're trying, participating, and applying themselves because they see that they're valuable -- they're not just the person who's always getting in trouble." 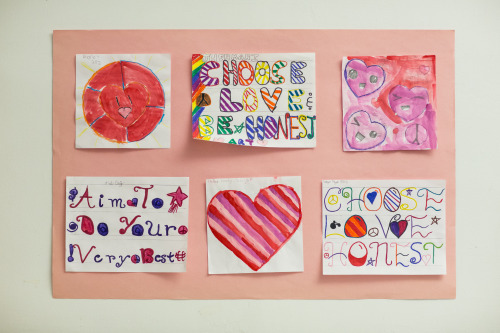 Teaching: an art and a science.

"Visual art is also a huge part of who I am, so I use it to teach the kids about science and animals. When we were studying the rainforest, I cut out paper trees and decorate the room from floor to ceiling. Every time we'd learn about a new animal, the kids would make it and add it to the rainforest.

Though I am a Flintstone when it comes to technology, I see the value -- because that's where the kids are. Our school is very into it, and soon we'll have laptops for every classroom. We use online programs like Study Island or Renaissance Learning a few times a week. The data is definitely important, because it leads you to how you need to adjust your teaching for success. I'm a logical person and I do think about standards. I embrace them. And I don't think so much about character development so much that I throw everything else out -- because they need to be ready for assessments and they need to be competitive. But you can't forget about the heart. Without that connection, it doesn't stick." 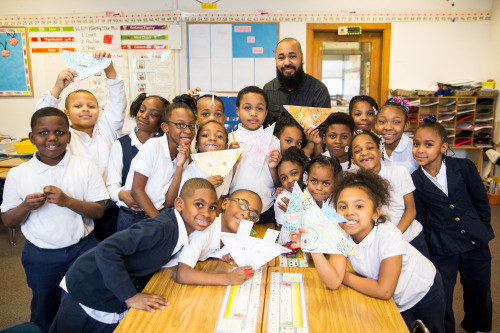 How you know you're doing it right.

"I always tell people -- you know you're a person who really cares when the students visit you daily. When kids who aren't yours or who have moved on come back to visit you, it says something. It says that they know you care.

There are so many teachers that are doing it right. They're pouring themselves into these kids year over year, and they get very little for it. I'm an artist, and that's important to me. My art has suffered because so much energy has gone into my job -- and I'm ok with that. Because at the end of the day, the kids are the ones benefitting. A lot of teachers are in the same boat, sacrificing so much of themselves because they give so much to the kids. But then they're not honored for it.

Education in general is kind of low on the totem pole in terms of what's important -- and it's so odd, because teachers are building tomorrow. I don't really know how to fix it. People say that you get your reward in heaven. It's not something you're doing for other people, so they look at you and say, 'Good job.' You're doing it because it's important." 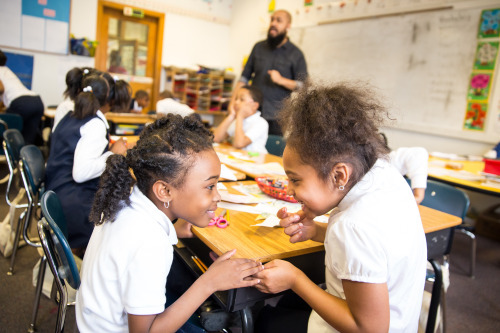 "Education is in a weird place right now, with assessments changing and becoming more rigorous. It's having a makeover, and I feel like relationships with the kids are getting lost in the shuffle.

I'm pretty transparent with the kids in terms of who I really am. I'm not just Mr. Cuascut. The first day of school, I write my full name on the board -- "Jorge Cuascut" -- so they know me. My dad was Puerto Rican, and I want them to know that's a part of me. I let them hear my band sometimes and they all giggle. And maybe I look strange to them -- I have a beard, nose rings, tattoos and sometimes, I paint my fingernails black. At first, when they see me, they're like, 'Who is that?!' But I feel like I can expose them to a variety of people they might come across in life. They see intelligence that looks different. Intelligence doesn't mean a suit and tie; it means having a conversation.