The first time I met animator Jorge Gutierrez, director of the dazzling new animated musical film The Book of Life, he made me laugh. I interviewed him at San Diego Comic-Con in 2009 about his new animated series on Nickelodeon, El Tigre. He told me that he and his wife Sandra Equihua, co-creator of the series, had attended San Diego Comic-Con for years as volunteers because they could not afford tickets. For the first time, they could be there without having to be on duty, and he was thrilled. "This is Nerdstock," he said, "And I am Senor Nerd!"

Five years later, I interviewed him again to discuss The Book of Life, the story of a love triangle that becomes the subject of a wager between the rulers of the two lands of the afterlife. The Land of the Remembered is presided over by the sultry La Muerte (Kate del Castillo). The Land of the Forgotten, is ruled by Xibalba (Ron Perlman), who is not above lying and cheating to get what he wants.

The movie's hero, Manuelo (Diego Luna), a bullfighter who would rather be a musician, must travel through the underworld to win Maria (Zoe Saldana), the woman he loves. Channing Tatum plays Joaquin, her other suitor, a handsome hero with a chest full of medals. The look of the film is inspired by the Mexican Day of the Dead celebrations, especially the traditional wooden toys with skeletal imagery, and the animated characters are wonderfully tactile and appealing. 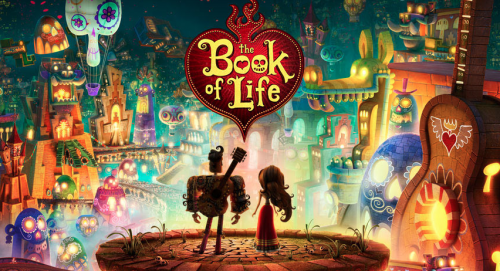 "Animation has a long history of giving inanimate objects life," Gutierrez explained. But he did not want the computer animation to create a world that was too perfect and pristine.

As a lover of Disney's Pinocchio, to me, the Mexican folk art characters were my Mexican Pinocchios. I played with them as toys but as I grew older I also would see them in museums and I understood that there was something unique about them. These folk art toys were reflection of the people. And I love folk art because of that. It's this idea that it is art by the people for the people. It's a mirror of who we are in Mexico. So I wanted to make a movie to reflect that, a love letter to folklore and the artisans who made these things. Computers are really good at making perfect, clean, shiny things. I want to do the opposite. So I kept saying to the team, 'We are digital artisans. I want to see flaws and mistakes and texture and dirtiness because that's what gives folk art its flavor.'

While the mythology in the film is invented and the themes of love, loss, family, and being true to yourself are universal, many of the details are specific to Mexican culture. This is reflected not just in the look of the characters and settings but the music as well, a scrumptious mix of song covers originally performed by artists ranging from Elvis Presley to Biz Markie, Rod Stewart and Mumford and Sons, plus splendid new songs from Us the Duo and the team of Paul Williams and Gustavo Santaolalla.

Gutierrez moved me to tears with his cultural and very personal inspiration for the film.

The Day of the Dead and the Dia de Los Muertos is my favourite holiday because I think the idea behind it is incredibly universal and beautiful. I think the iconography of The Day of the Dead is very cool and the aesthetic is incredible, but what's underneath I believe is even more beautiful. And the idea is this: as long as we remember those who came before us, as long as we tell their stories, we sing their songs, we cook their favourite dishes, we tell their jokes -- they're here -- they're here with us. The moment we don't say their names, the moment we don't remember them, then they're gone. And so that's the nugget of The Day of the Dead and I really believe it is something that Mexico has sort of embraced for two thousand years and I love to give that to the rest of the world.

When I was a kid in Mexico City, my best friend passed away. I was very little and I was very angry at the world. My mother said, 'Well, I'm going to teach you about the Day of the Dead.' That's how I learned about it. And she said, 'Your friend is here. As long as you talk about him, as long as you keep his name with you and you talk about him, you invite him to your birthday party, he'll be here. And in a second he's going to come visit.' And so that's what I did every year for my birthday and eventually he was my best man in my wedding. We just got married on The Day of the Dead November 2nd so he could be there. Every time I worked on the movie it was with him by my side, and the movie is dedicated to him. So I definitely have a connection to this holiday that is very personal.