Google on August 24 transformed its home page logo in honor of Argentinian writer Jorge Luis Borges (1899 - 1986), who would have turned 112 on that day.

A celebrated fiction writer, poet and essayist, Borges made major contributions to science fiction and pioneered the magic realism genre in the first half of the twentieth century.

He is also known for writing fake reviews of works by authors who never existed. Of himself, he famously said, according to the Telegraph, "I am not sure that I exist, actually [...] I am all the writers that I have read, all the people that I have met, all the women that I have loved; all the cities that I have visited, all my ancestors."

Some of his most prominent works include "Ficciones," "The Aleph" and "Labyrinths," all collections of interconnected short stories

In the 1975, he published "The Book of Sand," about an endless tome, whose pages can be looked upon only once. "Borges was blind by this point, but in his blending of worlds and epochs, fantasies and realities, he could be said to be glimpsing a fully digital future of infinite downloading," writes the Washington Post.

Despite his impressive collection of work, Borges was never awarded the Nobel Prize for Literature, a fact that he joked about thus: "Not granting me the Nobel Prize has become a Scandinavian tradition; since I was born they have not been granting it to me."

In Borges's Google Doodle, a figure, presumably the author, can be seen standing at a window, overlooking a fantastic, futuristic cityscape. Visit Google's home page on August 24 to check it out for yourself, or take a look at the screen grab (below). 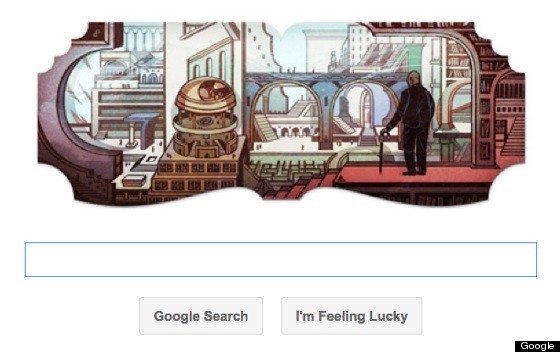