We are the undocumented immigrant youth who struggle alongside our families and in our communities against the detention and deportation regime which every day works to displace and to harm us and which succeeds too-often in claiming our lives.

Most of us can remember when we first read your testimony in 2011. You possessed a powerful story and storied credentials that immediately reached a mainstream media audience eager for a familiar voice to speak about the plight of undocumented immigrants. You expressed then that you could understand why those who struggled for years before your announcement might have had reservations about you, because you came on the scene at a point where much of the groundwork had been laid for those like yourself to bravely reveal their status. Many of us could not identify with your privilege and connections, but saw you as an ally. We knew that we might not always agree, but we hoped we could work with you and maybe even compel you to move in the direction of a more inclusive, complex narrative -- that's what it means to be and grow in movement together. We are compelled now to address you so publicly because your actions, even if they are not intentional, harm our movement and work against our communities.

Since you revealed your status to the world, you have at times successfully blended civil rights, racial justice and human rights talking points to serve a reformist, assimilationist narrative. "Diversity is Destiny," you say -- while we call for equality for all and denounce white supremacy. You minored in black studies and often call upon the radical politics of James Baldwin, yet until this point you have criticized and kept away from civil disobedience and you still stand with those who have called for punitive immigration laws. You held your tongue on criticizing the president at a time when it would have been brave to do so, and instead you hosted a White House Google hangout and wrote an article preemptively falling on President Obama's side as deportations skyrocketed.

You did not oppose the harmful "comprehensive immigration reform" proposals passed in 2013. The same reform that would have left out millions and further militarized the border that you and your colleagues at Define American this week called a "secure border," the same "secure border" which you have now called a trap for the millions living in what amounts to a militarized zone. Throughout the years, we have seen you waver in your solidarity with those who you position yourself to speak for and whose voices many assume you embody.

We have seen you cross picket lines as union workers were striking hotels where you gave speeches. We have seen you support immigration policies that seek to harm our immigrant communities. You have called us "Undocumented Americans" while trying to appeal to white people -- with a narrative that begs for their acceptance rather than challenges racism and nativism in America. You have condoned, supported, even celebrated the role of Mark Zuckerberg, Joe Green and others who espouse a vision of immigration based on meritocracy; a vision which by its nature calls for the imprisonment and deportation and which facilitates the total marginalization of those who once looked at you with admiration.

We have refrained from judgment or addressing the issue with you in hopes that you will learn and grow into a true advocate for our communities.

Sadly, you have not, and you have been stomping on the movement work of grassroots organizations that deeply care about the issue beyond promoting ourselves. Your vision seems to be clouded by your need to appeal to a segment of white America unconvinced of our humanity and dignity. It's because of this that we feel the need to tell you that you don't represent undocumented people in this country, you don't speak for our movement and you certainly do not humanize it. We represent the ones deemed "criminals," the deportees, the ones in deportation proceedings, the ones suffering from addiction, the high school dropouts, the college drop outs, the working class that are trying to make a quick buck to get by, and the children at the border - because many of us were once children at the border. In this sense what you once said is true --
you only represent yourself.

You have said explicitly that you are only accountable to yourself and that you identify as a journalist and a filmmaker, but not as an activist -- exempting yourself from having to answer to a movement while positioning yourself as a leader and an authority within that movement. We are concerned about your recent behavior at the border where children have been in crisis for decades. You have said it's an issue of humanity and not politics, ignoring that it is US politics abroad and immigration reform politics at home that have brought us to this moment.

We urge you to reflect on whom, in the struggle for your own rights and your own freedoms, you exclude and whose humanity you impinge. We call on you to stop promoting that "good immigrant" assimilationist narrative and we call on you to apologize for using the crisis of Central American children at the border as an opportunity to promote your own image. We invite you to come to California, to join us in our advocacy and service to community. We want you to see how the work that has laid out the platform for you to be able to go around and parade around this nation, and get arrested, is built.

We are not here to point the finger, but to offer solutions, and dialogue. That is why we extend an invitation for you to come to our spaces, and help us strategize and vice versa. How can we help each other reach our goals? 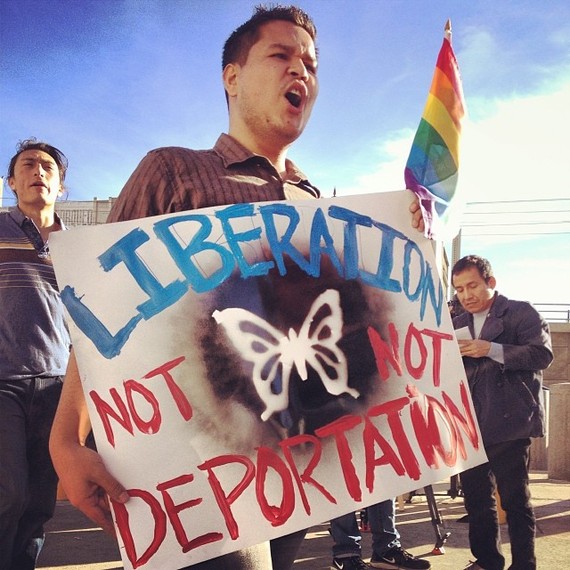 This letter was co-written with Cesar Vega (pictured above). Cesar is an undocumented queer immigrant from the Antelope Valley in California. He has been organizing in the Lancaster and Palmdale area for several years, and has shown true initiative in his community.