UPDATE: Jose Canseco has admitted to TMZ that his reattached middle finger did not come off during a poker game.

When the website contacted him about purchasing footage of the finger coming off, he told them that he cooked up the story after he saw a fake finger in a Halloween store.

The last few weeks have been thumbs down for Jose Canseco's dismembered middle finger. Now he's trying to turn his misfortune into a small fortune.

The controversial former baseball star said he was cleaning a gun Oct. 28 when he accidentally shot himself in the left hand and ended up losing part of his middle finger. 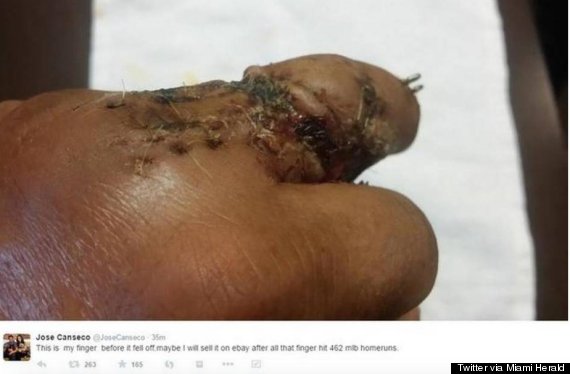 Although doctors attempted to reattach the 50-year-old ex-slugger's finger, it fell off Nov. 13 during a Las Vegas poker tournament.

Ok well I might as well tell you .I was playing in a poker tournament last night and my finger fell off .someone took a video of it.

My finger should have been amputated from the beginning. It was very loose with no bone to connect it.it was also smelling really bad.

Canseco is now trying to make as much money as he can from his middle finger.

Joe Melendez, Canseco's manager, says his client has the video of the finger falling off and may sell it to media outlets for the right price, CNN reports.

Canseco also claims he's planning to auction both the fallen finger tip and the gun that shot it off to the highest bidder.

This is the 45 caliber Remington that shot my finger off. It is for sale if anyone wants to buy it pic.twitter.com/r4Q0X7MUHl

The 45 caliber Remington has a chrome mirror finish with custom grips with crystals and gold plating in the grips pic.twitter.com/QvUhX2nBZl

Canseco is swinging for the fences, but he might strike out with his plan to auction off the finger on eBay.

As DeadSpin points out, eBay doesn't permit the sale of firearms and only allows the selling of human remains if they are "items containing human scalp hair, and skulls and skeletons intended for medical use."

Other auction places don't seem interested in helping Canseco sell the finger, either.

"The thought of selling the finger is abhorrent to us," Livingston told HuffPost.

He added, "Plus it would have to be authenticated," at which point he started cackling.

It's possible that a private party might contact Canseco directly to make an offer, but he shouldn't expect a windfall, according to sports memorabilia expert Josh Board of Autograph magazine.

"The problem is baseball collectors like things that aren't, well, body parts. They want the baseball so-and-so hit a home run to break a record," Board told HuffPost by email.

"Now, Canseco was sleeping with Madonna at one point. Had he lost his finger after a night with her, perhaps you have something. If he lost it during a game, it would be valuable. It would be the only time in baseball history that a well known player lost a body part in a game.