Khiara Limunoz, 14, is a top student. She’s the kind of kid whom teachers brag about and believe in. But no amount of positive reinforcement could relieve the dread Khiara felt every day when she walked into her Miami middle school.

"I did not want to come. Honestly, I did not," the eighth-grader told The Huffington Post. "I felt like I was in prison."

Khiara is one of 633 students at the Jose de Diego Middle School (JDD) in Wynwood where 96 percent of the kids live below the poverty line. And while they endure many of the same struggles impoverished children across the country face, they’re more acutely aware than most of the academic "luxuries" they’re missing out on.

Just blocks away, a cultural revival has taken hold in a neighborhood that was once home mostly to empty warehouses, drugs and gang violence. Now, this Art Basel mecca belongs to household names who claimed the looming walls to paint and the vacant buildings to open tony galleries. 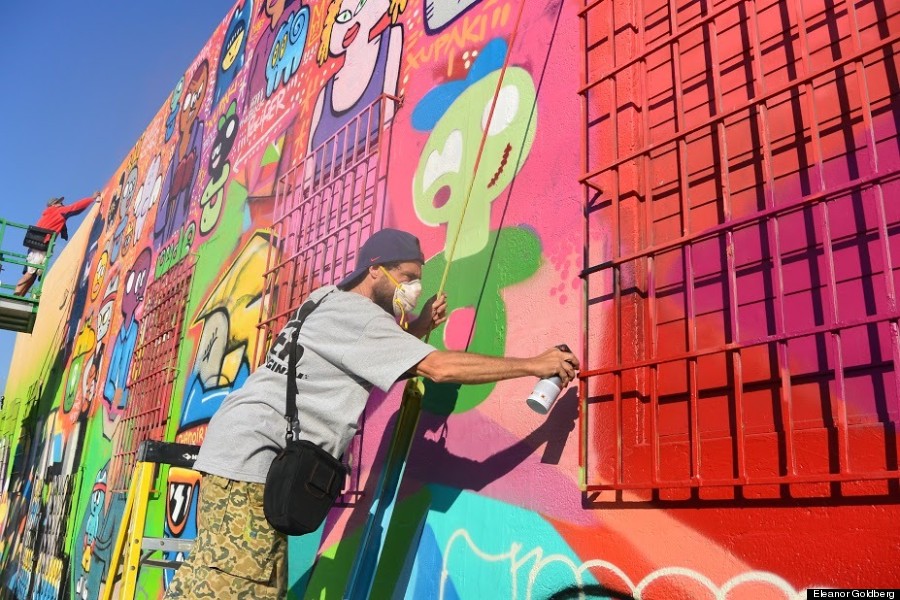 And though the children at JDD are exposed to renowned artists every day in their neighborhood, they had no arts program. The school's teeming 30-foot walls remained stark white, begging for someone to notice its canvas potential. 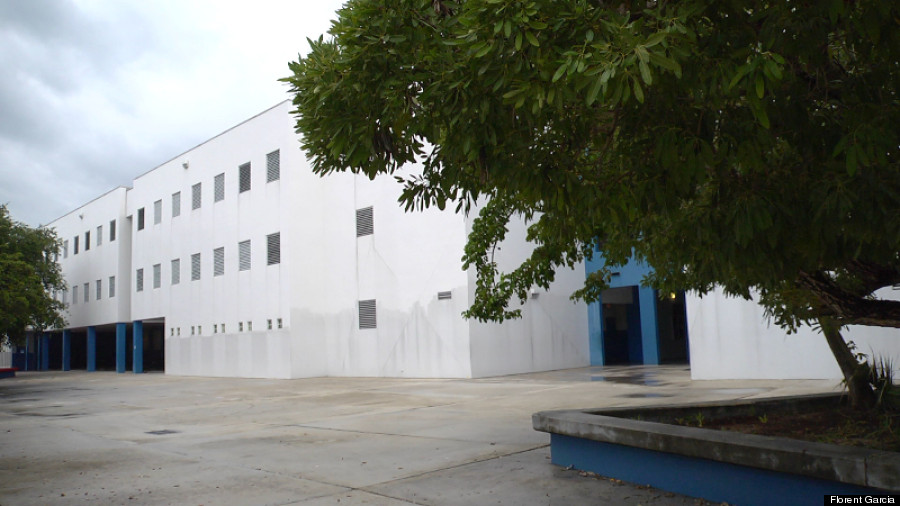 A photo of the Jose de Diego Middle School before it was painted.

"When they came to the school, they often said: 'Why can’t my building look like this?'" Principal April Thompson-Williams told HuffPost.

When Thompson-Williams came on board in February 2014, the unflappable principal was armed with a clear agenda –- to stop neglecting the arts, even if that’s become the norm.

In the U.S., 6 million students have no access to the arts in school, first lady Michelle Obama said at a fundraising event last year. Over the past decade, 60 percent of public schools have endured cuts to arts education, according to The Washington Post.

Despite the poor odds, Thompson-Williams wanted her drab school painted and to get a competitive arts program -- and was willing to look beyond the district for help.

Considering the litany of grim hardships the students at JDD face, a less-inspired educator might have had a much different set of priorities.

Students don’t flinch much at the sound of gunshots. A number of girls are moms already. Some students are homeless and most can’t afford the basics. A few unaccompanied minors from Colombia, who don’t speak English, recently showed up and Thompson-Williams said she "embraced" them with open arms.

For the principal, and the other faculty members who learned of her idea, interjecting some color into the school to bridge the communities, was their way of showing the kids that there are infinite exits out of their underserved lives.

"It was important for me to show the kids who have an artistic skill ... that you can be an artist. You can be creative. You don’t have to make it out with sports," said Rodney Royal, an artist and youth coordinator at the Overtown Youth Center.

At the beginning of the school year, Thompson-Williams petitioned the superintendent to hire an art teacher. The instructor is the first the school has had in four years and he’s at capacity. He teaches six to seven classes a day, jammed with about 40 students.

But it was a start.

The principal then partnered with two local arts groups, Wynwood Arts District Association (WADA), and WynwoodMap.com, that were determined to expand Thompson-Williams' vision.

"Immediately, I was overwhelmed by the amount of wall space," said Robert de los Rius, owner of WynwoodMap.com, "just amazing canvas for art."

The Miami native offered to commission artists to paint the school for free and launch a fundraiser to develop a robust arts program. They dubbed the initiative the “RAW Project” –- Reimagining the Arts in Wynwood.

While it might seem unconventional to seek out private funding for in-school programs, the constant federal cuts have engendered that trend.

Eager to get more young people involved in the arts, nonprofits are offering their support to schools.

For example, Prince George’s Philharmonic, a Maryland-based organization, devotes nearly a quarter of its modest $100,000 operating budget to arts education, according to The Post.

Initially, de los Rius, contacted 40 artists, some who were based in Miami and others were as remote as Australia and Hong Kong. They included such famed street artists as DFACE, MTO and David “Lebo” Le Batard.

The self-described “graffiti groupie” knew every major artist would be in town in December for Art Basel, the world’s biggest arts festival, and asked if they would paint a mural at JDD at some point during the event.

Each one unhesitatingly agreed and also offered to donate a piece to be auctioned off to raise additional money. 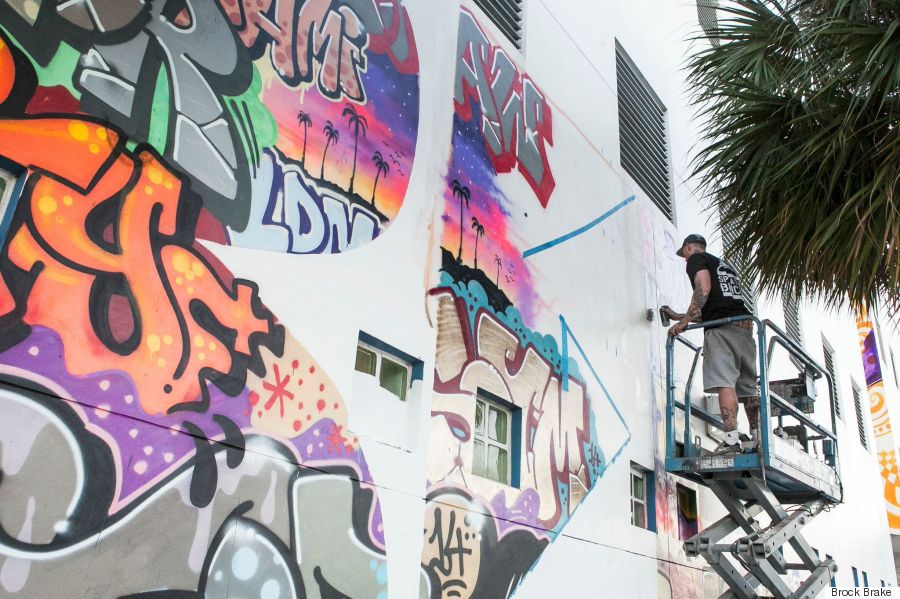 He collected about 50 gallons of paint, nearly 1,000 spray cans and a few lifts.

As word spread, renowned artists started contacting de los Rios to get involved. His only issue at that point was running out of wall space to assign.

Altogether, he brought 73 artists on board.

They worked throughout Thanksgiving weekend and at points during the four-day art event. They put in about 12 hours a day in order to have their murals ready for the Dec. 2 unveiling. 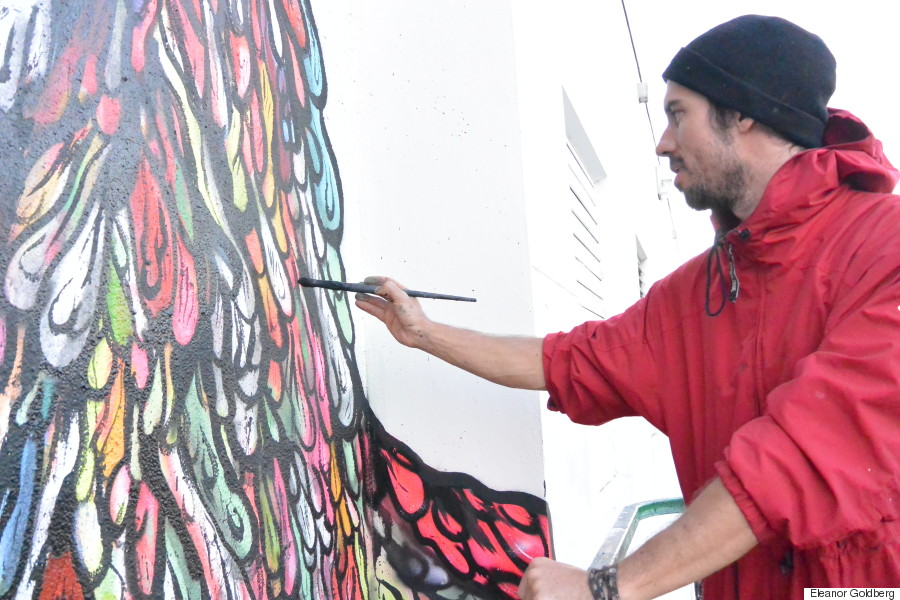 Since the school underwent its transformation, students are more eager than ever to see their arts program grow.

But in the meantime, while they patiently wait for more funding, the project has already offered up some unexpected benefits.

These kids, who are considered “rough” around Miami, are calmer these days, because they feel that they're in a safe place now, Thompson-Williams said. They're more excited about coming to school and even come to the grounds on weekends to play basketball and hang out. Instead of trying to get access to charter schools, more kids are interested in sticking around, and more local children have inquired about enrolling.

“I was happy and inspired,” Khiara said after the murals went up. “It’s like our own little world.”