He's helped Batman battle Bane in The Dark Knight Rises. Not to mention going toe-to-toe with the G.I. Joes in The Rise of Cobra. He's even braved multiple levels of the human subconscious in Inception.

So given that Joseph Gordon-Levitt has gotten so good at doing the action-hero thing in these big budget blockbusters, one might wonder why he'd then be so eager to voice a desk-bound aeronautical engineer in The Wind Rises. But Joseph has a two word answer to that question: Hayao Miyazaki.

"Ever since I first discovered his films back in the late 1990s, I've been a huge fan of Hayao Miyazaki," Gordon-Levitt said during a recent phone interview. "So when Frank Marshall reached out in the Fall of 2013 and then asked me if I'd like to come voice the central character in what was supposed to be this Japanese animation master's very last full-length animated feature, I immediately jumped at the chance."

And given that Joseph had done animation voicework previously (He voiced the Jim Hawkins character in Walt Disney Animation Studios' 2002 release, Treasure Planet. Not to mention voicing Cobra Commander for the G.I. Joe: The Rise of Cobra video game), Gordon-Levitt thought that he knew what he was getting into when he signed up to do The Wind Rises. But when this 33-year-old stepped into the recording booth, he then found himself facing a whole new set of technical challenges. 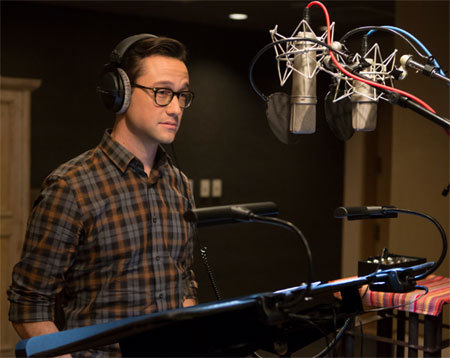 "When you're recording the English-language version of a Japanese movie, getting things to sync up properly with the already-finished animation can sometimes be tricky. First and foremost, you always want to make sure that you're getting the underlying emotion of each scene across," Joseph explained. "But at the same time, you also have to make sure that the dialogue that's been written for the English translation of this film actually matches up with the animation up there on screen. Which can often be quite challenging. But I find that -- when you insert a technical challenge like this into the creative process -- you often inspire unexpected creative choices which can then be quite cool."

So how did Gordon-Levitt prepare for this project? Did he do any research on Jirō Horikoshi, the aircraft engineer who helped design the Mitsubishi A6M Reisen "Zero", the aircraft that many Japanese pilots flew in World War II? Surprisingly, no.

"Look, the audience isn't coming to this movie to hear me or to find out what sort of clever spin I put on Jirō's voice. They're coming to this movie because -- just like me -- they're Hayao Miyazaki fans," Joseph stated. "So taking that into account ... Well, I felt that my main job on this movie was to just honor & support it. Do whatever I had to in order to help make this masterful piece of animation that much more accessible to English-speaking audiences."

Mind you, before Gordon-Levitt agreed to take part in the English-language version of The Wind Rises, he watched the original Japanese version of this Miyazaki film. Which Joseph says " ... without exaggeration, is one of the most beautiful films I've ever seen."

"There's just so much detail in the visuals. You can look at every single frame in this film and there's just so much to discover," he enthused. "You can focus in on some character in the background who's just walking down the street. And Miyazaki's such a masterful animator that -- if you watch that background character -- you can see that they have their own whole other story going on. There's a million little details like that in The Wind Rises. And if you had to read subtitles in order to be able to follow this film's story rather than just watching it and then being sucked into Miyazaki's world, you'd miss a lot of those great subtle nuances. Which is one of the main reasons that I agreed to take part in the creation of an English-language version of this movie."

Which is why -- in early December of last year -- Gordon-Levitt found himself in a recording booth. Where -- working with Gary Rydstrom, the director of the English-language version of The Wind Rises -- he then spent five days behind the mic, painstakingly going through this Miyazaki movie, doing whatever he could to make the character of Jirō more accessible to English-speaking audiences.

"And what's great about working on a movie like this, literally going over the same scene again and again until you get the sync and the emotion just right, is that you then get to view it at a whole 'nother level. And while The Wind Rises has a lot of the same elements as Miyazaki's earlier movies -- the flying sequences, his obvious love of nature, those weird little magical touches -- it also seems strikingly grounded and human," Joseph said. "I absolutely love that aspect of The Wind Rises. How it's historically based and has the sort of texture that can only comes from real life." 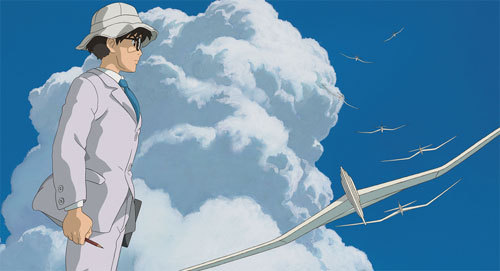 "And the cool thing is -- even though this film is grounded in a rather realistic story, relative to the other magical, bizarre worlds that Miyazaki has created -- The Wind Rises still gives you that same sort of magical feeling," Gordon-Levitt continued. "That why I really enjoyed voicing the character of Jirō. Miyazaki took the way that this engineer felt about his work, how magical & fantastic & excited Jirō got as he was designing airplanes and then used that to show how that magical Miyazaki kind of feeling can exist even within the normal life of an engineer."

That -- to Joseph's way of thinking -- is the big take-away from The Wind Rises. That Hayao Miyazaki is actually able to take his audiences into that head space. Help them appreciate the real beauty & true excitement that can be found in everyday life.

"I think -- often times -- that the movies transport you to another place and then say 'This other place that we took you is really exciting.' And then you get finished watching that movie and you're like 'But my life really isn't as exciting as that other place that this movie took me to,' " Gordon-Levitt concluded. "But with The Wind Rises ... It doesn't really take you to anywhere that doesn't already really exist. It's kind of just the normal life of a normal guy. Jirō 's an extraordinary and talented engineer but he's not like some wizard or superhero or anything. But The Wind Rises is as beautiful and as sweeping & majestic as any story about a magician or a superhero. And I just love that. That this movie shows the beauty that's already there in normal, everyday life."