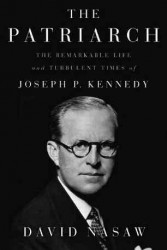 The Patriarch (Penguin Press) is the perfect title for the life story of Joseph Patrick Kennedy. It resounds with the drama of rolling drums to introduce a paterfamilias who created one of America's most powerful political dynasties. The author, David Nasaw, was hand-picked by the Kennedys and given access to all the family's personal papers, including the senior Kennedy's letters, which comprise the ballast of this biography.

Such access is no surprise for an historian on the faculty of the Graduate Center of the City University of New York, where he is the Arthur M. Schlesinger Jr. Distinguished Professor of American History. As President Kennedy's in-house historian and the devoted biographer of Robert F. Kennedy, Schlesinger was no incidental contributor to the myths of Camelot, but this is not to say that Nasaw's biography is hagiography. He covers the light as well as the dark corners of Joseph P. Kennedy's complicated persona. But having written biographies of William Randolph Hearst and Andrew Carnegie, Nasaw prefers to describe himself "as an academic historian, not a biographer," which may be why his narrative reads like an orange squeezed dry. For 896 pages he follows the chronology of Joseph P. Kennedy's life (1888-1969) as methodically as a metronome, and documents all the facts with footnotes. Yet one wishes there had been a little more poet in the professor.

Joseph Patrick Kennedy was born to all the prosperity that East Boston allowed Irish-Catholics in the 19th-century, which was fathoms below the social acceptance accorded "proper Bostonians," as Kennedy referred to his Protestant peers. Blessed with charm and intelligence, he was determined to break down the wall that separated former "bog-dwellers" from their Brahmin "betters." This became his life's ambition and drove him to make his son the country's first Irish-Catholic president.

After attending Boston Latin, then the best public school in the country, young Joe was accepted at Harvard. There he excelled in athletics and networking, which, he impressed upon his sons in frequent letters, was the purpose of Harvard. "You will have a great start on any of your contemporaries and you should be able to keep up very important contacts," he wrote. Befriending "the topmost people," as he called them, became a lifetime priority.

After graduating from Harvard, Kennedy was unable to get a white-shoe job on Wall Street, so he became a bank examiner in Massachusetts and mastered the intricacies of an unregulated stock market, eventually earning a reputation as a "rapacious plunger." He pounced on bankruptcies, foreclosures and receiverships, and used insider knowledge to buy and sell stock, all of which would later become illegal. As president of an East Boston bank he borrowed heavily from the bank to finance his trades, and borrowed even more to invest in commercial real estate. In 1945 he bought the Merchandise Mart in Chicago for $13 million. The family sold the Mart in 1998 for $630 million.

Kennedy also made huge profits from reorganizing and refinancing several Hollywood studios. During this time he managed the career of the film star Gloria Swanson, who became his mistress and traveled with him on his family vacations. A practicing Catholic, he also traveled with his own confessor. Nasaw reports that Kennedy spent little of his married life with his wife, Rose, who ignored his pursuit of other women just as her mother had done when her husband, Honey Fitz, the mayor of Boston, was caught with a cigarette girl named "Toodles."

Making multimillions during the bull market of the 1920s, Kennedy had become one of the 14 richest men in America by 1957. By then he had established trust funds (each worth $90 million in 1960) for his nine children and each of their children. He provided his family with a luxe life of Rolls Royces, yachts, villas on the French Riviera, Hollywood mansions, an estate in Palm Beach, a summer compound in Cape Cod and a suite in the Carlyle Hotel.

In addition, Kennedy bought his own publicity machine. His legion of press agents included the respected New York Times columnist Arthur Krock, who was put on a secret annual retainer to do Kennedy's bidding whenever he wanted positive coverage for himself or his family in the nation's most influential newspaper.

Nasaw explores in detail Joseph Kennedy's virulent anti-Semitism and his role as U.S. Ambassador to the Court of St. James when he aligned himself with Neville Chamberlain to appease Hitler. His isolationist views forced him to resign as ambassador and made him anathema to most Americans, but Kennedy never apologized. Even after the allied victory Kennedy told Winston Churchill that the war had not been worth the lives lost, including Kennedy's first-born son and namesake, and the destroyed European economy.

Those familiar with Kennedy lore might be amused to learn that J.F.K. was considered by his father to be "the family's problem child." So concerned was Kennedy about his second son's messy appearance, dilatory study habits and poor grades that he beseeched the headmaster at Choate to intervene and "do something about Jack." Yet it was Joe Kennedy, not Rose, who cancelled vacations to stay home to nurse J.F.K. through many of his childhood illnesses.

What emerges from this biography is that the anti-Semitic, pro-Nazi, philandering wheeler-dealer was -- first, last and always -- a ferociously loving father who put his sons and daughters above all else. As he told President Roosevelt: "I did not want a position in the government unless it really meant some prestige to my family."