With a new mayor of New York City and with the start of Meenakshi Srinivasan's term as Chair of the Landmarks Preservation Commission, the long-standing effort to protect the "Little Syria" neighborhood of Downtown Manhattan has reached an important juncture. While there was initially substantial optimism that the Bill de Blasio administration would be more supportive of historic preservation and less servile to powerful real estate interests, the initial actions of the new Landmarks Preservation Commission have shocked the preservation activist community. Not only has the Commission declined to hold hearings on important properties where designation had been recommended by city council members and community boards (including buildings in "Little Syria"), but the Commission attempted stealthily during the 2014 Thanksgiving holiday to deny nearly 100 properties, already calendared for consideration as landmarks, from ever having a hearing.

In such an environment, the only check against the rapid dismantling of New York's heritage is a small group of mostly volunteer activists who monitor the activities of the Commission and the status of various historic properties across the city. One core activist, Joseph Svehlak, is a indefatigable force who has maintained awareness of New York City's vibrant history through organized walking tours and through unending preservation activism. He initiated and led the decade-long effort to raise awareness of "Little Syria" and the "Lower West Side" and to advocate for the protection of a last remaining sliver of three buildings. He continues to attempt to persuade Srinivasan and the other members of the commission to allow a basic hearing to take place. This interview hopefully provides a sense of his motivations and dedication. 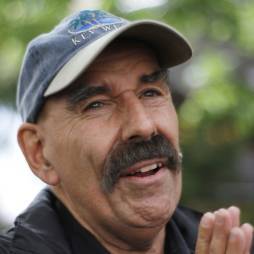 In 2003, you wrote a manifesto calling for three connected buildings on Washington Street to be preserved as New York City landmarks, and for years you have continued to advance this cause. What motivated that action at the time? Did you anticipate how much of a long struggle the effort would become?

With all the destruction in Downtown New York after September 11, 2001 and the subsequent plans for redevelopment, I became extremely worried about the terminal loss of the Lower West Side neighborhood that I had known as a child. As a youngster in the 1940s, I couldn't understand why buildings where people lived and worked were being torn down. My mother told me, "They need to build a tunnel [the Brooklyn Battery Tunnel]."

We would walk the old, narrow streets and my mother would tell me about life Downtown where she had grown up as an immigrant child. One of Mother's remembrances was how she didn't speak a word of English when she started St. Peter's Catholic School at the age of 7 in 1912. She and her family were from Moravia, yet she went to school with kids who spoke Polish, Slovak, Arabic, and several other foreign languages. The only pupils who spoke English were the Irish and they made fun of the foreign language speakers. My mother would point out where her family used to live, as well as the different shops and restaurants that were still there.

Twenty-odd years later I would witness the destruction of the neighborhood's remnants as again homes and businesses were removed to build the World Trade Center complex. By 2003, not much was left of one of New York City's oldest immigrant neighborhoods. I was advised by a historian to propose 103-109 Washington Street to the Landmarks Preservation Commission for designation since those three buildings best represented the lost Lower West Side neighborhood. At that time, I didn't anticipate it would become a great struggle to persuade the Landmarks Preservation Commission on the architectural and cultural merits of the only remaining unique and significant streetscape of church, community house and tenement. How better to represent what was once a very diverse and vibrant immigrant neighborhood than by showing the religious, social, and residential aspects in a contiguous grouping? Yet, it took the Landmarks Preservation Commission six years to designate St. George's Melkite Church.

The memory of Downtown's lost neighborhood has suffered severely since those of us who remember its last days are mostly over 70 years old now. So, to most New Yorkers, it is as if the Lower West Side neighborhood never existed, since it has mostly been redeveloped out of existence. It was commonly thought 30 years ago that, with the beginning of loft living in what is now known as Tribeca (the former Lower West Side) and with the new development of Battery Park City, this was the first time people would be living Downtown on the Lower West Side. New residents did not have a clue that the Lower West Side was a thriving immigrant community from the 1840s through the 1960s. Unlike the Lower East Side, South Village, Chinatown and Little Italy, where there are many tangible remains of immigrant history, the Lower West Side has only a few buildings left. I believe the most important of these are the small, unified group at 103-109 Washington Street. These three buildings convey a human-scale perspective on the lost community in an area of now ubiquitous and undistinguished high-rise development. They should be saved.

You have made the argument that recalling the multiethnic character of "Little Syria" -- and especially of the Downtown Community House that served it -- is extremely important for the historical memory of New York City and of the United States. What is your reasoning behind this, and why do you believe that the neighborhood can inspire people?

In 2009, after a six-year campaign, the Landmarks Preservation Commission did designate the former St. George's Melkite Church, since it attractively represents the former "Little Syria" community. Yes, the Middle Eastern immigrants -- Syrian, Lebanese, Greek, Armenian, etc. -- were the most prevalent from the 1890s through the 1940s, but by the 1900s diverse Slavic immigrants -- Slovaks (who had their own school), Poles, Czech, Ruthenians, Ukrainians, etc. -- were also living and working in the same area, along with Irish, Scandinavians, and other various nationalities. In 2009, several of the Downtown preservation advocates formed the "Friends of the Lower West Side" group to seek full recognition for this most unique and diverse immigrant neighborhood. In 1917, at least twenty-seven nationalities were counted as living in the area of the future World Trade Center south to the Battery and west of Broadway. The integration of the uniquely diverse mixture of Nordic, Slavic and Middle Eastern people is represented by the diverse ethnic tenancy of the tenement at 109 Washington Street and by the various uses and services provided to all nationalities at the Downtown Community House at 105-107 Washington Street.

The first major Arab settlement in the United States, known as the "Mother Colony" among Arabic-speaking immigrants, the Lower West Side had, by the early 1900s, become a unique melting pot community, as detailed in The Financial District's Lost Neighborhood 1900-1970, written by former residents of Slavic descent (Barbara and Martin Rizek, with Joanne Medvecky). The Lower West Side's unique ethnic history is part of our national heritage of assimilation, tolerance and understanding and should be honored and properly identified as such. Anyone with whom I have spoken who had ties to "Downtown," as it was referred to by many in the non-Arabic community, had fond memories of a tight-knit, safe, and friendly community where children of immigrants grew up together and, in some cases, even intermarried. The history is a tremendous story about what our country is at its best: a place for immigrant people of different backgrounds to live together and learn about becoming American.

The Lower East Side, much larger in size, tended to have more homogeneous areas of ethnic settlement, and it did not have a large Middle Eastern population like the Lower West Side. Yet, landmark designation solely for the former St. George's Melkite Church doesn't tell the whole story. The Downtown Community House and the tenement, in conjunction with the church, provide a more in-depth representation of the destroyed neighborhood. It was before the Landmarks Law of 1965 that both major acts of eminent domain occurred so preservation legislation was not then in place to properly identify the Lower West Side's unique place in the immigrant history of New York City. It's still not too late for the Landmarks Preservation Commission to somewhat make up for what was lost, and we have hope that new commissioner Meenakshi Srinivasan will act to schedule a hearing.

In the preservation community, your indefatigable commitment inspires other activists at a time when many are feeling despair about the forces that control New York City and its physical heritage. How do you deal with never-ending adversity and frustration? What advice would you give to young preservationists concerned about the historic fabric of New York City?

Our ongoing struggle to save a neighborhood's identity becomes frustrating as government agencies fail to act. But I've been inspired by the dedication and perseverance of many others involved in the preservation movement. I say that you must never give up and keep gathering support for your causes. Even with the endless setbacks, I have benefitted from my preservation efforts by forming bonds with other organizations, and in friendships with other dedicated community-minded people. A preservationist never works alone. We all learn from and support each other in our efforts, so one is never alone in the struggles and should never be discouraged. Even if the buildings disappear, with continued research and documentation, the memory and story of the community will endure. My advice to preservation activists is: organize yourselves and join with like-minded people and plan activities to raise awareness about your preservation project. We must hope that the will of the people will make an impression on the Landmarks Preservation Commission. Ultimately, we should all strive for a more democratic landmarking process.