Josh Ritter's eighth studio album, Sermon on the Rocks (Pytheas Recordings), is a rollicking and tender masterpiece. His robust fan base has been eagerly awaiting this record a long time, especially since he's previewed quite a few of these tunes at live concerts over the past year. Produced by Ritter with Trina Shoemaker (Queens of the Stone Age, Emmylou Harris), the album's 12 songs were recorded over two weeks at New Orleans' The Parlor Recording Studio. The work features Matt Barrick from The Walkmen on drums, Zachariah Hickman on bass, Josh Kaufman on guitar, and Sam Kassirer on piano.

If you've seen Ritter play live, you know how infectious he is on the concert stage. If you have not, do yourself a favor and go. His joyous smile and his humor will give you a peek into his open, exuberant heart. He's no run of the mill singer/songwriter; he's an artist, and his songs sparkle like diamonds, they read like short novels.

This song cycle is informed by the wild open prairie, by teenage lust and religious fervor, by talismans and apple pie, bad boys and good girls, oracles and riverbeds, dreamtime tunes and cowboy lullabies. It's pretty damn magical and well worth the wait. 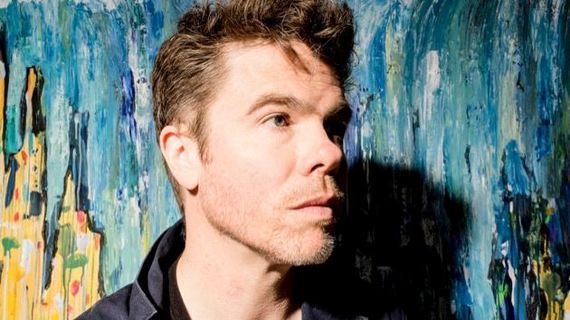 You mentioned that the inspiration behind your new album is "messianic oracular honky-tonk" - which sounds terrific - what does it mean exactly?

Well, I really liked the sound of the words together, you know. I felt like they had the same sort of color as the record. They felt like kind of wild and sometimes foreboding and sometimes a party. In general, the sense of damn the torpedoes, some sort of like careen, I wanted to feel like it was coming as much as possible. That's what I felt like would describe the record because there's moments on it that are very foreboding and the dark side of messianic.

I think the very first song ("Birds of the Meadow") feels to me like a wild man, sort of John the Baptist type. Other images are less like less violent but you have Moses, there's that ("Young Moses"). You have the mountain top like a mountain top vision; then there's so much sermon on the mount stuff, beatitude stuff that I felt like all those things sort of added up to something. Then also the idea of mysticism and spirituality in America is so kind of rollicking and weird that I kind of wanted that to be contained in that phrase if that makes sense.

It's very biblical, the images. I really love the record, I've been playing it non-stop for days. I've seen you do some of these songs live and loved them. And I know the record is highly anticipated because it's your first in four years, yes? And you have quite an extensive tour planned in the new year?

It's going to be so fun, I love this band. I love them so much in a way that I have not felt before. I'm desperate to play on stage right now, just desperate, just can't wait.

What does the title Sermon on the Rocks refer to?

There's so much 'Sermon on the Mount stuff' which I think runs through the record in a way. I often times don't know that stuff or notice that sort of stuff as it's happening because you're writing songs separately and songs kind of just come and by the time you're done with one you're not thinking about it when you're writing the next. Suddenly, I've finished and I had all these songs and there's like this Sermon on the Mount or mountaintop vision or all those things, spooky reincarnations and stuff like that, all felt like kind of a crazier take on Sermon on the Mount.

There's something so incredible about that passage. I'm not, I don't consider myself to be a religious person. I was definitely raised in a religious environment but I think there's portions of the Bible that really resonate with me and I like the idea of somebody standing on a mountain delivering very simple truths. Truths that you don't need to be religious to appreciate; like treat each other well, we should treat each other like we wish to be treated which is such a simple thing that's amazing, that is so little understood. That passage has always been really interesting to me because it seems like such a simple system, all the best things that people would like to be.

Look at the Republican Debate, and you wonder if anybody has ever heard that like the concept of having a neighbor or having a brother, something like it's so strange, it's a parallel universe where we can't understand that a Syrian refugee is just somebody that needs our help. We shouldn't have to fight to bring these people into our country.

No, we shouldn't, and we also shouldn't be erecting walls so people can't get in because of their ethnicity.

Because of their direst need, no one wants to come to like, no one, what causes a person to bring their entire family through a desert and through all kinds of horrible situations, across the sea. They're not doing it for the free cable.

I noticed that there's some really strong female characters in the songs and I was wondering if being the father of a young daughter has influenced your writing? (Ritter has a toddler, Beatrix, with novelist Haley Tanner)

I think so, yeah, yeah definitely. It's certainly made me more aware of those sorts of like the trends concerning girls and women in a way that I had not had the experience. I mean like personal searching about like how do I want my daughter to be raised, what do I want her to believe. She'll believe whatever she believes but I do see that there's a tremendous pressure on girls these days and a lot of blaming the victim.

Even like in "Henrietta, Indiana," (on the new album) I really consider the narrator there to be a girl, she was just always in my head as a girl. This person who's driven to the edge and is about to commit this really reckless crime but she's also like where's she's come from and her family and her situation is pushing her into this really bloody deed. I really believe, I think that's true there's a lot of strong girls, women on this which I'm so proud of.

One of the things that I has really interested me in previous interviews you have said that books influence you almost more than music and I was wondering what books were influencing this record and what you are currently reading?

Right now I'm reading The Little Friend by Donna Tartt which is a spooky cool book. It's so impressive. I've been really interested in the Hilary Mantel books, I've been reading haunted house books like Shirley Jackson. I've been reading some books that are just about all kinds of stuff, The Looming Tower and Going Clear (both by Lawrence Wright). Definitely a bunch of stuff, who knows where your inspiration is going to come from - that's one of the best things about being a writer. You have permission to read whatever you want, it's great.

For sure I get more ideas from books, I get a lot of ideas like from writing, from songs or from music but typically they're ideas that I take with me. There's Alan Jackson's "Chattahoochee," there's a great guitar. It's a great song. There's a great guitar line in there which was really influential to me as I was thinking about making this record, all kinds of stuff, Roger Miller. Mostly though, those guys lead by example and for me the leading by example is great because I'm coming along after them and it's cool to see them go out on a limb, it makes me want to go out on a limb. It's competitive almost, you know. It's great for the ideas and for the thinking times for both.

Oh yeah I just read The Lottery and We Have Always Lived in the Castle, which are both so good and so sparse. I really love that.

Speaking of books, any ETA on your second book? The first one was great.

Thank you, I'm working on something right now. I put it aside for the moment but I've got a couple of projects which I'm psyched about. Once I have a little bit more time in between tours and stuff it's something I really want to jump into. It's funny, as you know I'm sure it's like such an all-encompassing thing when you're writing, it crowds out everything else in a way that songs don't. I think songs don't take as long to write, it's funny, and you have plots with a book.

But you know, that being said one of the things that I love about this record is that each song is almost like a novel, it's like a little mini novel. Just reading the lyrics, you can read them and not have to hear them in songs for them to work. A lot of songs aren't like that.

I really believe that songs, for me, for myself the goal is always the lyrics: you should be able to read them. I really think so because that's how the rhythm works, that's how poetry has worked in the past, lyrical poetry whether it's set to music or not.

Also, I noticed that you recently started to share your drawing and your painting on social media. I was wondering do you see this as complementing your songs or is this like a separate thing?

I just started doing it because it shut my mind off in a way that is like when I'm writing. I got stuff happening all around me in my office and when I'm drawing or when I'm painting in a way that happens with nothing else I focus and zone in and it's my thinking time. As much as anything like a long ride in the car might be, it's great. If I get something out of it that feels fun, I have a desperate need to perform so I like to put it out there.

You're originally from Idaho?

Yes. Northern Idaho like in the kind of panhandle, which is a beautiful place, I was just back home. My folks still live there, they teach across the border in Washington State. It's really an incredible place. Where I grew up is on the edge of what they call the scabland, which is like the area I grew up - rolling farm lands, very, very dry. As you move west towards the Cascade Mountains you enter into this desert that was a lava flow for like two hundred miles. It's just like serene and crazy out there. Then you hit the Cascades then it turns into a rain forest. It's outstanding, just so beautiful.

So you announced the tour today which is amazing, a lot of shows beginning in January of next year, and you had mentioned that your wife and daughter travel with you, are they going to be traveling on this tour too?

She loves it. She's just getting to the age now where she'll be able to take in the full experiences of when we go to these towns, we go to playgrounds, go to restaurants. She gets to fly on a plane or be on a bus with all the guys. She loves the guys.

She really is a road dog. Totally!

For more information on Josh Ritter, Sermon on the Rocks, and upcoming tour dates, including October 22 at Rough Trade in Brooklyn, visit http://www.joshritter.com/