According to the release, the steamy film is called "The Eleventh Hole" and will feature the extremely graphic text messages that James says Woods sent her. "The movie will take viewers behind the Tiger Woods headlines" and will present the plot "in sensual and graphic terms," the press release says.

James has previously stripped near the sites of Tiger Woods' first two tournaments since his return to professional golf.

A Thursday tweet from James suggested that she may be currently working on the film's production or promotion. Scroll down to see the movie cover photo as well as the full press release. 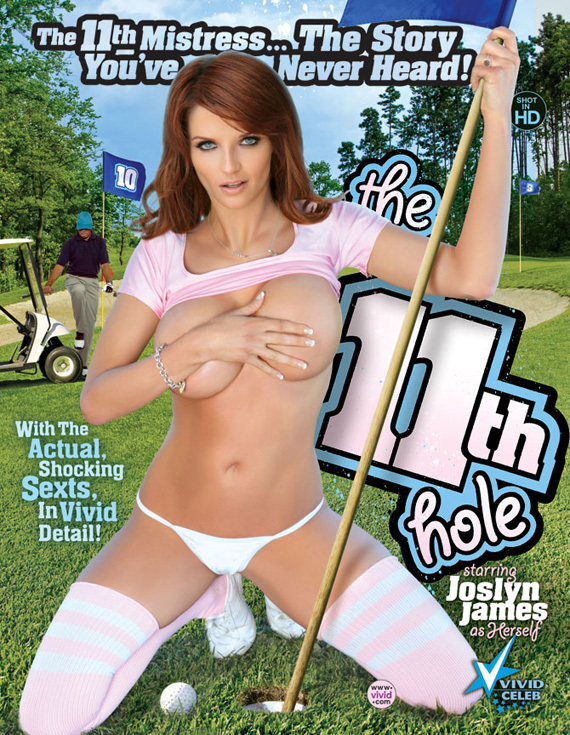 LOS ANGELES -- Vivid Entertainment, the world's leading adult film studio, has signed a contract with one-time Tiger Woods mistress Joslyn James to make "The Eleventh Hole," a movie that will depict never-before-told intimate details of her three-year relationship with the golf champion.

The movie will take viewers behind the Tiger Woods headlines, gossip columns and texting to capture the most secret fine points about James' affair with the golf icon.

In sensual and graphic terms, viewers will learn the between-the-sheets story behind the personal texts Woods sent to James.

The movie will be released under the studio's Vivid-Celeb imprint, which has earned fame and notoriety for popular movies featuring celebrities having sex, from Pamela Anderson and Tommy Lee to Kim Kardashian, former Miss USA Kelli McCarty and Playboy Playmate and reality TV star Shauna Sand.

James, also known as Veronica Siwik-Daniels, carried on a long-running affair with Woods after meeting him at The Bellagio resort in Las Vegas. She has disclosed numerous steamy text messages the two exchanged to arrange their trysts.

"Even at major tournaments we would manage to hook up, and in fact it wasn't unusual for us to have sex four or five times a day," she said in a recent interview.

Steven Hirsch, founder and co-chairman of Vivid, said he anticipates "a great demand for this film because we think it will tell the real story behind Woods' voracious sexual appetite and the women who satisfied it."

Joslyn recently consulted with Vivid when the studio held open auditions for the role of Tiger Woods in her upcoming movie which is expected to be released on May 17th.