One of the most interesting moments of James Hibbard's excellent EW interview with Joss Whedon comes just after a discussion about what's wrong with the ending to The Empire Strikes Back, when Whedon shifts his point slightly to focus on a self-referential moment during Indiana Jones and the Temple of Doom. (To read the full interview, you will have to buy a copy of Entertainment Weekly.)

"A movie has to be complete within itself; it can't just build off the first one or play variations. You know that thing in Temple of Doom where they revisit the shooting trick? ... That's what you don't want. And I feel that's what all of culture is becoming -- it's becoming that moment."

First of all, he's right. But second of all, it's interesting that he picked that moment, of all things. Because that moment has always bothered me for an assortment of reasons.

First, a little background on that scene. In 1981's Raiders of the Lost Ark, there was a scripted, prolonged fight between Indiana Jones and a swordsman.

As it turns out, Harrison Ford was suffering from dysentery on this particular day of filming and suggested that Indy just shoot the swordsman as opposed to doing another highly choreographed scene. What resulted is one of the most memorable moments in cinematic history.

And the best part is that this scene developed by circumstances and by accident. It wasn't manufactured popular culture -- it just happened, which makes its legacy all the more appealing.

Then, as Whedon points out, the trick was done again in 1984's Indiana Jones and the Temple of Doom. Indy tries to reach for his gun and shoot the, this time, two swordsmen. 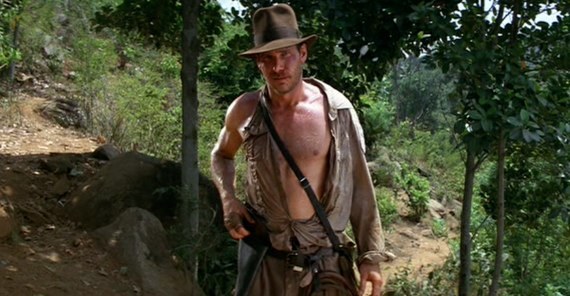 But, alas, his gun is missing. Which results in an Indiana Jones grin made more for us, the audience, than the two swordsmen who have no idea why Indiana Jones is smiling.

Then again, considering that Temple of Doom is a prequel to Raiders, I'm not sure why Indy is smiling either. Indiana Jones would not have yet shot the Raiders swordsman. (Which is weird because Indy reaches for his gun in such a brazen, "I've done this before" way.) So this scene exists for only one of two reasons: Either (A) we are now supposed to believe Indiana Jones shoots swordsmen all the time -- which kind of dilutes the fun of that Raiders scene -- or (B) it's there so that people watching Indiana Jones and the Temple of Doom will say, "Oh, I get it." (The correct answer is "B," by the way.)

Whedon's point is that now that he's directing Avengers: Age of Ultron, he doesn't want to rely on his original The Avengers movie for the sequel's special moments and/or plot. Like, say, if Tony Stark decided to visit his favorite shawarma restaurant only, this time, it's closed. Or, say, Hulk tried to punch Thor, only this time, Thor ducks.

And, yes, this is also why Whedon doesn't like the ending of The Empire Strikes Back, because it requires you to watch another movie to find out what happened. I will politely disagree with Whedon on his Empire criticism, but his damning of that Temple of Doom scene is spot on.

Fan service can be a nice thing in movies that feature characters who people genuinely love. But fan service like the gun scene in Temple of Doom -- and those like it -- just make everyone involved feel stupid. I enjoyed Star Trek Into Darkness, but the worst part of the movie was the almost complete recreation of the Kirk-Spock death scene from Star Trek II: The Wrath of Khan. It's not so much that J.J. Abrams, Roberto Orci, Alex Kurtzman and Damon Lindelof did recreate that scene, it's that they did so in an effort to make people watching say, "Oh, I get it." Great! I mean, of course you "get it." How could you not get it? Everyone gets it. That's the problem. The best kind of fan service is when very few people get it. Being beat over the head with a reference to a prior movie isn't fun for anyone.

I keep thinking about Whedon's sentence, "I feel that's what all of culture is becoming -- it's becoming that moment." And, again, with Temple of Doom, what a precise and specific example. But, also, what a perfect example: A scene designed only to play off of your nostalgia for a much better scene from a previous movie. Which is what Star Trek Into Darkness did. Which is what The Lone Ranger did (TV, in this case). Which is what almost every blockbuster does now.

Joss Whedon is right. And it would be nice if we lived in a world in which a filmmaker would think to himself Does this scene more resemble the swordsman scene in Raiders of the Lost Ark or the swordsmen scene in Indiana Jones and the Temple of Doom? Let that be the barometer. If it's the latter, perhaps it would be best to take Whedon's advice.