The mystery of a 900-year-old Viking message has finally been solved. Cryptologists, put down your cipher devices, because the formerly incomprehensible code that's been haunting your dreams reads in part: "Kiss me."

A runic artifact that reads: "Kiss Me". Photographer: Jonas Nordby.

The baffling Jötunvillur code, which dates back to as early as the 9th century, has popped up in over 80 different Norse inscriptions, puzzling runologists (those who study the Viking rune alphabets) for some time. That is, until Jonas Nordby, a runologist from the University of Oslo, valiantly broke the code, realizing a simple pattern amongst the writings.

"For the jötunvillur code, one would replace the original runic character with the last sound of the rune name," he explained in an interview with Forskning.no. "For example, the rune for 'f', pronounced 'fe,' would be turned into an 'e,' while the rune for 'k,' pronounced 'kaun,' became 'n.'" 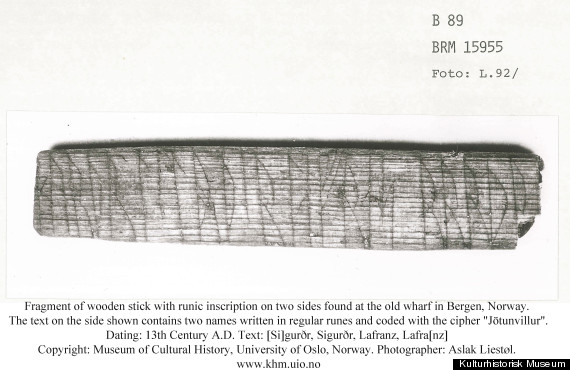 Sounds easy, right? Nordby sifted through all the findings of rune codes in northern Europe, mainly Scandinavia and the British Isles, to settle on his conclusion. Cryptologists previously thought the code was used to communicate secret messages, but Nordby thinks the pattern might have been instrumental in the teaching of rune instead. For instance, a means of memorizing the order of the alphabets.

Amongst them -- "Kiss me," shown in coded rune in the first image above. Perhaps Nordby has stumbled upon a nearly millennium-old love letter? Dare we say, a Valentine? Whatever the case, runic code researchers deserve a round of applause. There's nothing like the glee felt after solving a good ol' medieval mystery.

Note: The artifacts photographed by Jonas Nordby are located at the Bode Museum in Germany and the Sigtuna Museum in Sweden