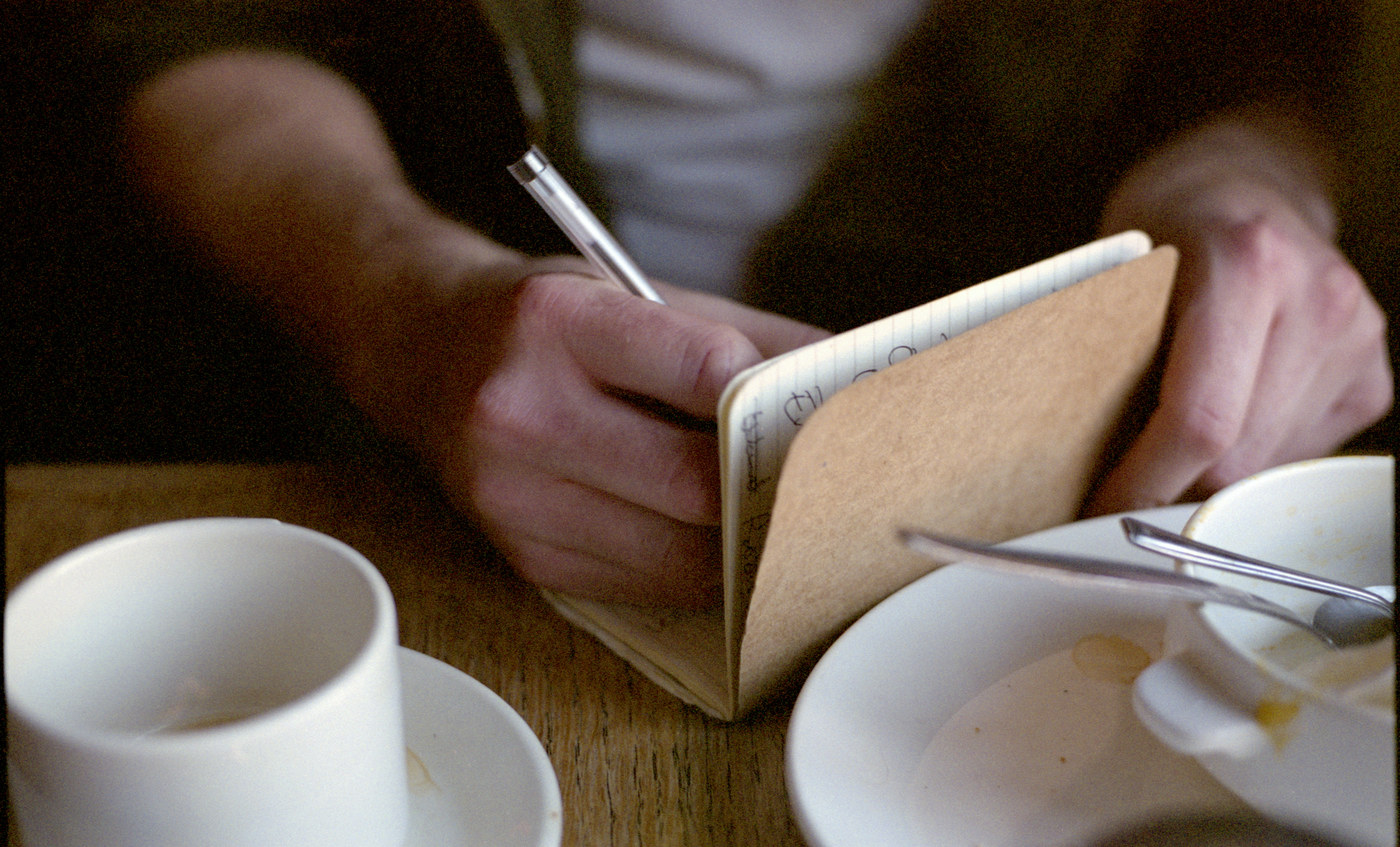 This is the fourth installment in our series on mental health in the newsroom. Here are the first, second, third and fifth installments.

But for Morgan, a journalist living in Manhattan whose bylines have appeared in the holy trinity of New York City-based publications -- The New Yorker, The New York Times and New York magazine -- freelance writing also means freedom. He considers himself something of a high-functioning dilettante, spending his days scribbling in Greenwich Village coffee shops, strolling through city parks with a notebook tucked under his arm and choosing -- to a certain extent -- which stories he covers and whom he covers them for. He’s not married to any one publication or beat, but a friend to many, available for a fling whenever the timing is right.

“It makes it sound like I’m Walt Whitman, but it’s not like that,” says Morgan, who earned a master's degree from Columbia University's Graduate School of Journalism in 2005 and continues to give lectures on freelance writing on campus once a year. “It’s just that there are a lot of people who think their job is their desk, and I feel like that’s never been me.”

As much as Morgan's lifestyle may in some ways seem like that of a 19th century poet, the digital revolution has changed the landscape of freelance writing dramatically. At some news organizations, staff cuts have led to larger freelance budgets in order to maintain the same steady flow of content each day. And with new digital startups launching every year, there has perhaps never been a greater number of outlets for writers’ work to find a home.

At the same time, there is also a sense among some freelancers that the quality of these opportunities has become diluted in 2015: Publications pay less per article, outlets expect faster turnarounds and clickbait listicles get approved far more often than substantive features.

Still, despite the unpredictable, often Sisyphean nature of this work, there are freelancers who insist on fighting the good fight day after day.

“As a freelancer your ideas have to be better than the staffers,” Morgan says. “That’s sort of the justification for the freelance budget. A freelance page is more [expensive] than a non-freelance page in your publication, or even on your website, so you have to justify it. You can’t just be throwing it around.”

“I feel like people still think of freelancers as super replaceable,” he adds.

Still, editors at top publications insist that they continue to rely heavily on outside writers whenever possible. Consistent work exists, it would seem, as long as freelancers are able to offer a steady stream of unique and compelling story ideas editors are unable to find in-house.

“Somebody comes to you with an idea that is rooted in a place or a situation or a scene or a conflict that you have just heard nothing about, and you kind of think, ‘Wow.’ You immediately want to read it,” says Jared Hohlt, an editor at New York magazine, one of the few major outlets that frequently posts job listings for freelance submissions online. “Someone came to us with this story that people were eating their placentas in Park Slope. Well, OK. Sure, you know? We’ll say yes to trying that out.”

Hohlt helms the print edition of New York, and while in recent years the nearly 50-year-old magazine has enjoyed success with its Daily Intelligencer and Vulture blogs, there is still a feeling among some freelancers that the prestige (and money) lies on the physical page. Publications that live both on the screen and on the newsstand tend to reserve their best material for print.

“I do sort of feel like there has been a relative explosion of outlets where you can get your stuff published,” Hohlt says. “Now, the question of what you’re getting paid for it, I agree, is a complicated one.”

“I do feel like there are more jobs, although there are a ton that really don’t pay well,” says Sarah Jaffe, a freelance labor journalist and a fellow at the Nation Institute. “There are still websites popping up every couple of months and they want you to write a 1,000-word article for 50 bucks. You can’t make a living writing a 1,000-word article for 50 bucks. The math doesn’t add up. The amount of time it takes out of your life doesn’t add up.”

Reporting an article for $100, or even $150, doesn’t really add up either, according to Jaffe. She thinks the poor pay has contributed to the half-baked “hot take” culture of today’s media, where writers are focused on dashing off something quick and caustic in order to generate buzz and conserve energy.

But despite all the challenges the Internet has created for the journalism industry, Jebediah Reed, a digital editor at New York magazine, says he would still be focusing his attention on the web if he were a freelancer today. Though print might pay more per word, there are a number of hoops for journalists to jump through before a piece is ever published.

In the last several years, New York magazine’s print publication has started to ask outside writers to pre-report articles more thoroughly before giving a final green light for an assignment. Morgan calls it the “yellow light of dating,” not unlike a potential mate saying casually, “We should hang out sometime soon.” In rare cases, veteran freelancers might pocket a little bit of money while pre-reporting a story -- an agreement New York calls a “step deal” -- but those kind of arrangements are rare and remain fairly arduous.

“I think probably at a per-word rate print generally does pay higher, but there’s a lot more process and it takes a lot longer for anything to happen,” Reed says. “So I don’t know if on a time-invested basis you are actually getting paid more. I think if you do a reported, 1,000-word feature for the web and its timely and you break a little bit of news, your per day rate can be fantastic.”

While freelancers often bemoan the difficulties of breaking into publications, both Reed and Hohlt say they put up few roadblocks for new writers looking for work. They say they care little about which outlets a freelancer has written for in the past and even less about the pervasiveness of someone's social media following, adding that the demand for good, incisive pitches often outweighs the supply.

And as New York has expanded its purview past the five boroughs to include national and international coverage, there’s a growing need for solid writers who can explore locations and cultural pockets staffers can’t always reach.

“I actually feel like the pool of good freelancers has been shrinking because there are so many good staff jobs out there right now, very much on the digital side,” says Reed. “Someone can be a sort of brand new journalism student and if they have a fantastic angle on a subject we’re interested in, I’ll work with them on a reported feature about it. It’s all sort of proving yourself through doing. And then if you’ve successfully done a good story for us, I try to stay in touch with strong freelancers who generate good ideas and can execute them.”

Like most things in life, writers get out of freelancing what they put into it. For both veterans and neophytes, it takes persistence to make a living. There’s no single job interview to ace that will guarantee a steady flow of work. Each assignment for a working, rank-and-file freelancer has to be earned.

In 2010, Morgan penned a personal essay for The Awl detailing the may trials and tribulations he encountered during his tenure as a freelance writer. The happy ending was that after seven years on the grind he had finally landed a staff job at the The Commercial Appeal, a daily newspaper in Memphis, Tennessee. But some five years later, Morgan is back in New York City chasing freelance assignments.

For years, Morgan tried unsuccessfully to break into the New Yorker, the legacy publication that, in some ways, still exists as a status symbol for writers around the world. In December, after knocking and knocking, the gate finally swung open for him.

“I had pitched them many, many times and it sort of finally hit,” Morgan says. “Too many people do that thing of like, ‘Oh, this has been challenging, so I’m not going to do it,’ or ‘I’m going to do the thing that’s not challenging.’”

“It’s similar to dating,” he continues. “You want to find your soulmate, and you also expect that to be easy? It’s not going to work like that.”