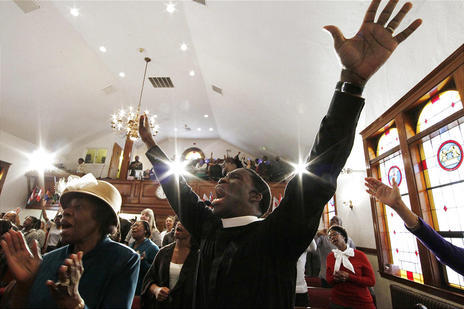 On the surface, Black Lives Matter demonstrations can appear to simply be collective acts of rage against U.S. law enforcement agencies, not the "love note to black people" the movement's founders intend it to be. I was reminded of this "love note" while perusing Twitter during the Freddie Gray demonstrations in Baltimore. While cable news outlets were covering the looting and unrest, black children and adults were dancing in the midst of civil unrest. In that moment, those dancers were participating in the old tradition of resisting the brutality of white supremacy through practicing joy.

During the brutality of chattel enslavement and the era of white-dominated sharecropping, black people wrote and performed songs of resistance, reaching into the inner-recesses of their suffering to uncover balms of joy. They sang of "gospel trains" and "sweet chariots" coming to rescue them and of not having long to "stay here". While some have claimed that these songs of joy symbolized blacks' passive acceptance of subservience, Frederick Douglass, the formerly enslaved abolitionist, claimed that "Every tone was a testimony against slavery, and a prayer to God for deliverance from chains." While black bodies were chained, black psyches weren't.

In the Civil Rights era, activists wrote protest songs, sometimes repurposing the music of their antebellum ancestors to combat the racist tactics of Jim Crow America. As protesters "woke up" with their "minds stayed on freedom" and intoned the inevitability of overcoming racism, they engendered a new world based not on white supremacy, but on an economy of shared humanity, forged through common suffering. The August 29, 1963 edition of the New York Times went as far as describing the mood at the March on Washington as "festive".

Enslaved and oppressed people often know something that oppressors don't: Oppression is untenable. The economic, social, and political subjugation of people of African descent in the United States can't last forever. This, of course, is counterintuitive to those who are convinced that there is no end in sight for state-sanctioned violence against black people in the forms of police brutality, incongruous black imprisonment, and low-performing black schools. And yet, black joy remains, in the words of Terrance Laney, "Undead, unchained, and fearless." It dances in the face of armed officers, sings in the presence of death, and shouts down systems of terror. Black joy is the Spirit of liberation that inhabits black bodies in church services, defying order of rows of pews for spontaneous joy.

When enslaved people of African descent were converting to Christianity, their white enslavers began panicking. "If they discover the freedom that comes in the message of Jesus Christ," the enslavers thought, "they will surely escape our labor camps and kill us." The enslavers' fears weren't completely unfounded, seeing as Nat Turner and his associates launched the Southampton Insurrection as a result of being told by God to rebel against the institution of enslavement. Insurrections like Turner's caused some white enslavers to squash every possible sign of black joy as they split up black families, suppressed black prayer gatherings, and publicly raped black women and men. These grotesque practices, however, did not crush black joy.

In present struggles for black liberation - from Oakland to McKinney - demonstrators are embodying this rebellious joy, from playful chants to rhythmic choreography. We do this, not because of black deaths, but because of black life; life that is fleeting, complex, and beautiful. We will not be crushed because we know that while the history of white supremacy is long and triumphant, white supremacy itself is not the last word; joy is.