In the interreligious movement, Oct. 27, 1986 stands out as a landmark moment when Pope John Paul II convened representatives of the world's religions to gather at the Church of Saint Francis of Assisi, Italy to pray together for the first time in history.

Twenty-five years ago at the closing of the Assisi World Day of Prayer, Pope John Paul II remarked:

"For the first time in history, we have come together from every where, Christian Churches and Ecclesial Communities, and World Religions, in this sacred place dedicated to Saint Francis, to witness before the world, each according to his own conviction, about the transcendent quality of peace. The form and content of our prayers are very different, as we have seen, and there can be no question of reducing them to a kind of common denominator. Yes, in this very difference we have perhaps discovered anew that, regarding the problem of peace and its relation to religious commitment, there is something which binds us together."

Two and a half decades later, Pope Benedict XVI invited nearly three hundred representatives of the religions of the world as well as a few non-believers to participate in the 25th anniversary of the World Day of Prayer for Peace: A Day of Reflection, Dialogue and Prayer for Justice and Peace in the World, on the theme Pilgrims of Truth, Pilgrims of Peace.

This historic gathering was held Oct. 27, 2011 at Assisi, Italy to commemorate the first such gathering held 25 years ago on the same day in 1986 by Pope John Paul II. 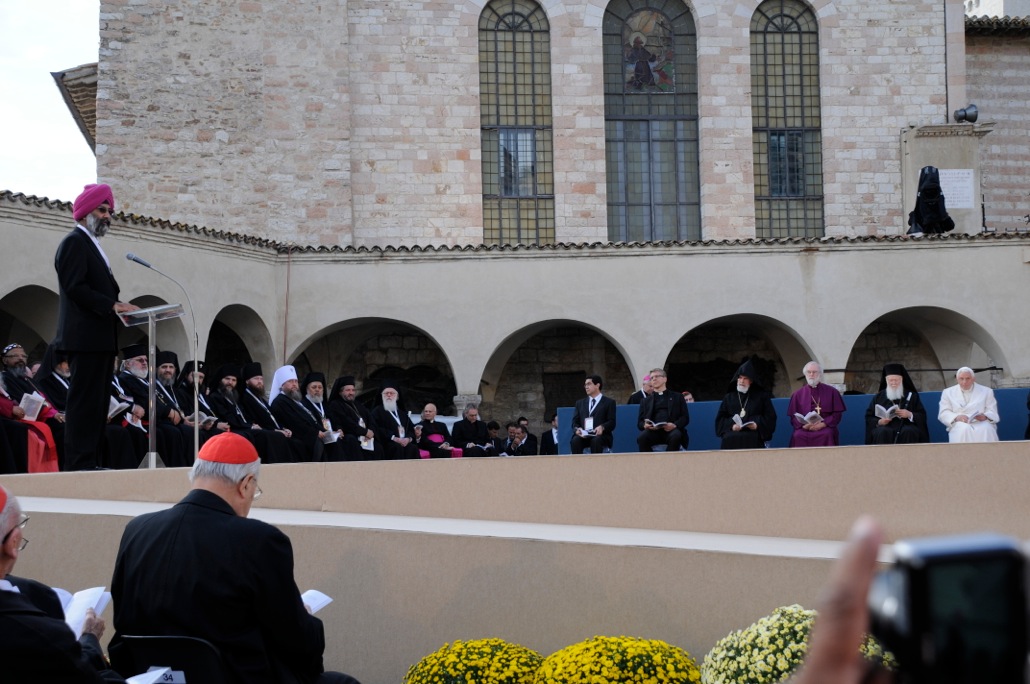 I had the honor of representing the World Sikh Council -- America Region (WSC-AR) at this historic meeting. It was also a privilege to attend the gathering as a board member of Religions for Peace USA, Council for a Parliament of the World's Religions, North American Interfaith Network, National Religious Coalition Against Torture, Journal of Inter-Religious Dialogue and locally the Interfaith Association of Central Ohio.

The gathering opened on Thursday, Oct. 27 in the morning with the entire delegation of religious representatives as well as Pope Benedict XVI travelling together by train from Vatican City to Assisi, Italy.

The first morning meeting was held at the Basilica of Santa Maria degli Angeli during which the Pope welcomed each delegation personally. About a dozen religious representatives spoke and underscored the need for world religions to come together to wage peace, not war. Pope Benedict XVI in his address said: "As a Christian I want to say at this point: yes, it is true, in the course of history, force has also been used in the name of the Christian faith. We acknowledge it with great shame. But it is utterly clear that this was an abuse of the Christian faith, one that evidently contradicts its true nature."

This was followed by an early afternoon frugal community meal in the refectory of the Convent of Santa Maria degli Angeli. After the meal, each delegation representative was offered a separate room for a period of silence, reflection and personal prayer.

Late afternoon, the delegation traveled to the beautiful hill town of Assisi which has been associated with St. Francis, the "universal brother," since the 12th century. Thousands of young Catholics welcomed the delegation with joy and cheer as it entered the courtyard of the Church of St. Francis. I had never before seen so many smiling and youthful faces of faith in my life. Several of us wept with joy as we walked across the plaza.

The gathering in the courtyard of the Church of St. Francis began with several contemplative dances by smiling and gracious youth who were overflowing with love and compassion. They wooed everyone with their enthusiasm, dedication and spirit. It did not take more than a minute to figure out in my own mind that these young people of faith were from the Focolare Movement, founded by Chiara Lubich. Their joy was infectious!

As the sun set over the courtyard of the church, about a dozen religious representatives offered a pledge of commitment to peace. I shared a pledge in the language of Gurmukhi translated as "We commit ourselves to educating people to mutually respect and honor each other in order to help bring about peaceful and fraternal co-existence between people of different ethnic groups, cultures and religions." Pope Benedict XVI concluded the pledge by adding, "Violence never again! War never again! Terrorism never again! In the name of God, may every religion bring upon the earth justice and peace, forgiveness and life, love!"

The gathering in Assisi closed with the young people offering lighted lamps of peace to members of the delegation. We then returned to Vatican City by train on Thursday evening.

On Friday, Oct. 28 in the morning, we were invited to the Apostolic Palace at the Vatican.

As we stood in the Palace admiring the Papal Swiss Guards who have guarded the Pope since 1506, Rabbi David Rosen, representative of the Chief Rabbinate of Israel, walked over to me. He said that we both had switched colors. He wore red yesterday and violet today while he pointed out that I wore a violet turban yesterday and a red one today. Little did we know that violet is the color of a Bishop's non-liturgical dress while red is the color of a Cardinal's non-liturgical dress!

Pope Benedict XVI received in audience the delegation at Sala Clementina of the Apostolic Palace followed by a closing luncheon offered by Cardinal Tarcisio Bertone, Secretary of State of the Vatican.

For me the 25th anniversary of the Assisi gathering is an important landmark in interreligious harmony in which we re-committed ourselves to peace and justice through dialogue at a time when the world is being increasingly divided along ethnic, religious and class lines.

This gathering had several firsts. For the first time a Baha'i representative was invited to attend. Additionally, several non-believers, who are also people of goodwill and conscience, were a part of this gathering.

One of the most significant firsts at this meeting was that although it included remarks, lectures and silent as well as personal prayers, there was no "joint prayer." According to the Vatican, joint prayers were not offered to avoid "any form of relativism or syncretism." My hope is that when we gather together in 2036 to mark the 50th anniversary of the Assisi World Day of Prayer for Peace, those of us who want to publicly pray with each other will be able to do so, while of course being respectful of those who choose not to.

During the interreligious meeting in Assisi, an Austrian TV reporter asked me of the significance of the gathering. I underscored the importance of this historic occasion for world religions to come together to recommit our faiths as instruments of peace not conflict. I hastened to add that while this is our common goal, how and if we get there will depend on what we do when we get back home to our own communities of faith.

More information on the Assisi meeting can be accessed at the Vatican website. 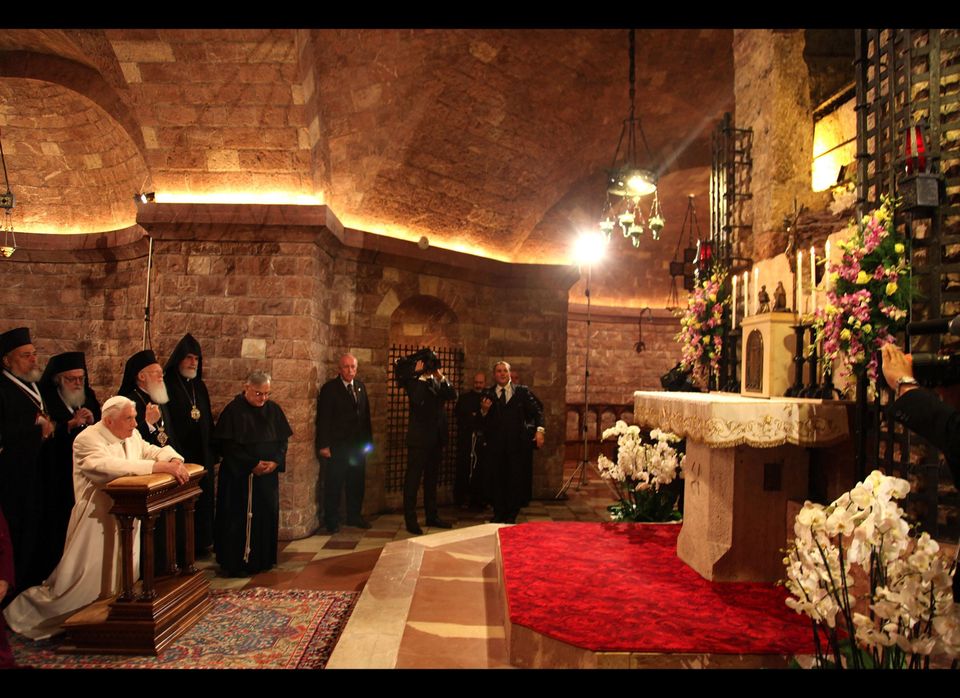 1 / 5
Assisi Interfaith Summit
ASSISI, ITALY - OCTOBER 27: Pope Benedict XVI prays in front of the cript of Saint Francis at the end of the meeting 'Pilgrims of truth, pilgrims of peace ' a day of reflection, dialogue and prayer for peace and justice in the world at the Saint Francis Basilica on October 27, 2011 in Assisi, Italy. The Pope met with approximately 300 religious leaders to mark the 25th anniversary of the Assisi interfaith gathering. (Photo by L'Osservatore Romano Vatican Pool via Getty Images)
Getty