In her 1989 review of feminist philosopher Sara Ruddick's book Maternal Thinking, Towards a Politics of Peace, Maureen Quilligan considers the link between motherhood and world peace. The duress of caring for infants and young toddlers can be so extreme, she writes, that mothers inevitably have moments when they wish to harm or even kill their children. As a father, I can attest to the fact that while holding an inconsolably screaming baby, I have felt that I could lose control of my frustration. But somehow I've managed to grit my teeth, stay as calm as possible, and try to comfort The Howling. In moments like these, Ruddick and Quilligan agree, mothers (and fathers who perform "maternal work") choose restraint over aggression. Maternal protection involves, "first of all...not murdering the baby." Refusing to act on such impulses creates a model for peace between adults and even nations. 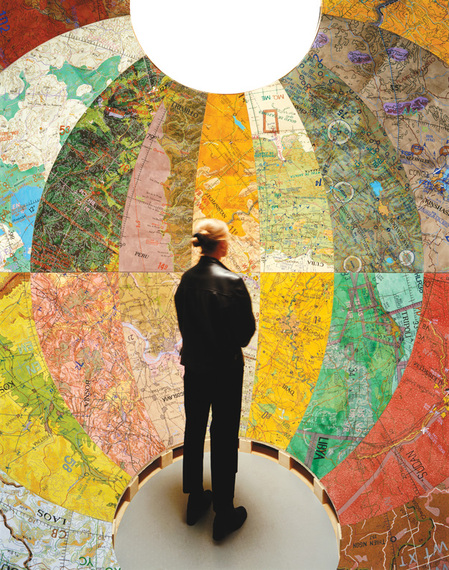 Cradles to Conquests, Kozloff's first solo show in New Jersey, takes a long hard look at the history of American military adventures. The show is awash in violence, including works with maps on which Kozloff has overlaid the movements of US forces, or marked all the sites we have bombed. It is a grim record. Targets, a nine-foot sphere, dominates the gallery, its colorful interior open for entry through a single panel. Walk in and be surrounded by aviation charts recording American bombing campaigns from 1945-2000. Light descends through an oculus at the structure's apex, ironically suggesting the sanctity of a church, but also the imperial power of the Roman Pantheon and its modern-day equivalents.

Kozloff somehow finds a degree of whimsy in many of her images without reducing their impact. This is especially true of her Boys' Art series, in which she collages arrangements of soldiers onto old maps of forts, along with her son's drawings of superheroes like the X-Men, Avengers, or the Fantastic Four. A founder of the Pattern and Decoration movement in the 1970s, she is adept at creating rhythms and relationships that sustain visual interest while connecting the dots between comic book violence and the grownup kind. 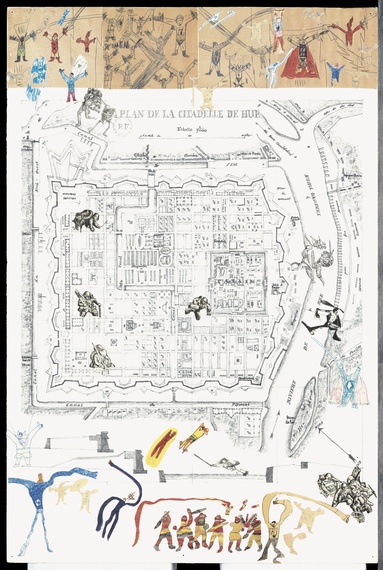 By contrast, in a series titled Manifest Destiny, her collages are filled with pictures of monsters, demons, skulls, and aliens cut from gaming magazines. These large works feel dark and despairing -- framed by children's book illustrations of cowboys and Indians, the central imagery done in blacks and grays, zombie and monster heads piling up like bodies in a mass grave. The tenor of these pictures reflects contemporary video games in all their bloody mayhem, and constitutes both a retroactive indictment of American expansion and a present-day cri de couer against our global military action.

Somewhere between the relatively lighthearted approach of Boys Art and the jarring doom of Manifest Destiny lies a third series of collages, American History. The composition of each picture centers on the same fort, and features a variety of collaged combatants swarming the landscape in all-over mayhem. Nuking the Japs is the most eye-catching with its strong yellows, a color choice that archly summons Western racist stereotypes. The array of collaged figures is at times amusing, with ancient-looking line drawings of scholars and peasants juxtaposed with futuristic alien warriors, lending a breath of silliness to the proceedings. 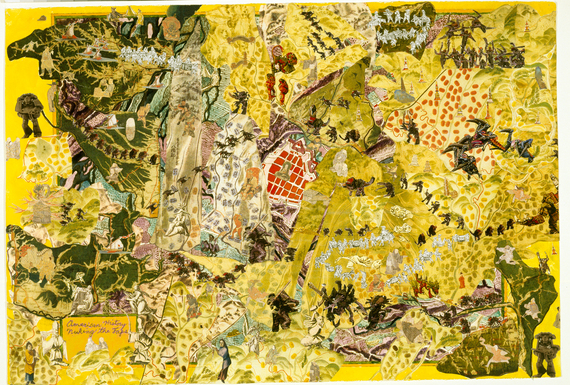 Like the collages themselves, the exhibition is dense: the pieces in Manifest Destiny and American History are so packed with information that careful viewing is a demanding experience. The works are also hung close together, amplifying the feeling of an overwhelming cycle of violence on infinite repeat. By the end I was put in mind of Heironymus Bosch, whose paintings are similarly dark, crowded, and leavened with humor in unexpected places.

Though Kozloff offers no overt glimmers of hope for a better tomorrow, there is a dim but real spark implicit in announcing herself as a mother through her Boys Art series. Incorporating her son's drawings, she signals her own maternal thinking, which both Quilligan and Ruddick believe holds the seeds of peace. Kozloff has a long history of feminist anti-war activism and art, and it does not feel like a stretch in this battle-soaked exhibit to find the quiet presence of the mother as an alternative force. Indeed, sharing the gallery floor with Targets is Rocking the Cradle, a large wooden cradle whose interior is decorated with a map of the bygone territory of Mesopotamia, now the Middle East, covered with arrows showing the 2003 American invasion of Iraq. At the risk of sounding naive, one might hope that as fathers are increasingly involved in raising their children and mothers occupy more seats of political power, future generations might enjoy a less violent world.