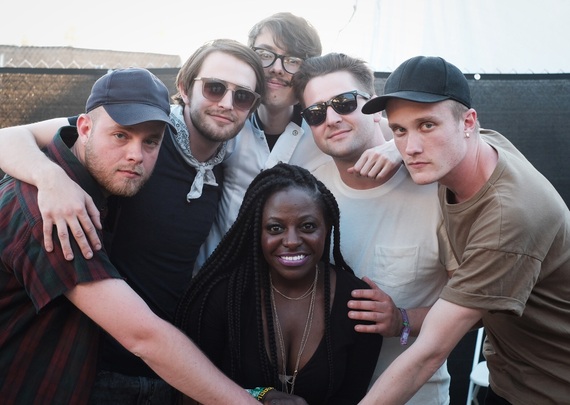 The crowd in the Mojave tent at this years Coachella Valley Music and Arts Festival, couldn't get enough of the hit band Joywave. The bands performance was candy for your ears, with mind blowing visuals. It was the perfect blend to creating an insanely high energy set. The success of having a great show carried over into our conversation in the press tent, bringing incredible insight to our sofa chat. The honesty was delicious as we talked going on tour, the false college dream and why some journalist need to get it together.

M: I thought it was really cool being in the crowd during your set. I was immersed. I loved- loved the visuals mixed with the music. How did that concept creatively come to mind?

J: That was a Sean idea and then Joseph our guitar player put it together over the last couple of days. We only did it a couple of days ago actually.

M: Did you get to see it prior?

M: You did it, I love it and the gold mic, I have not seen anyone with a gold mic-- nice!

J: Oh yea, yea well when we were making our record we did it ourselves and I put together like a gear list to send to our label and they like gave us the things on the list to make the record. And..I was like, I need this microphone for the snare drum it has to be gold, it has to be the gold one. They were like ok yeah, and its $100 more for the gold one and then it showed up and I was like great, thank you.

M: Ha-Ha--yes, thank you forever! Walking away from your performance that just took place, how do you feel about it?

J: GOOD, it was awesome. It's like weird cause one stage your like hearing your in ear mix. It's like cloudy sometimes and like the changeovers are only like 20 minutes. We're so use to playing bars over the years or having no monitors at all. The places we were playing like 5 years ago in a bar with like 10 people and the sound guy is like, I don't know you guys figure it out and just turns off the board and goes to the bar and drinks. You gotta be able to like do things on the fly. We caught a little bit of the broadcast, the youtube broadcast that aires after and we were looking at it like, "Oh ok, that's a sick band".

M: Yea, haha you are! It was really good. It was cool to be in the crowd and feel what they were feeling. The people were really into the show, they were having fun and it was a good vibe. The more you were engaging with the crowd, the more they were going banana's.

J: You know what's scary is like, when you're on stage like that and you're yelling at people and then they do whatever you say, and it starts to be like wait a minute. Is this how like fascism happens-- you know what I mean. It's just crazy, maybe thats like everyone's innate desire for someone to like tell them what to do and say.

M: It's true we as people can be a bit like robotic sheep. So with this amazing performance at Coachella under your belts, do you all have another big next lined up? I'm sure you have a full 2016?

J: Oh, its going to be crazy, were going on tour with Foals and Silversun Pickups.

J: We are going to do some headline shows and we're kind of like wrapping up the album cycle. Our record came out almost exactly one year ago now April 20th 2015. So yeah, we're hitting a lot of the markets one more time. It's been interesting because it's been this really slow build and we did this headline tour in the fall and it went really well. Like a lot of them sold out, but now its like a couple months later we can do like much bigger rooms and its like today we are the biggest band we have ever been. And..tomorrow we are going to be even bigger than that and the day after that bigger than that so its like this exponential phase. So we feel like we need to hit the big markets one more time.

M: How are you balancing expansion and staying in a big moment like today all while needing to be on top of the next and the next?

J: So, I am not a person that lives in the now at all. I'm exclusively like past and future. So, I'm thinking about everything I have ever done and everything I have to do and like now I am barely paying attention.

M: No, and I appreciate that. Because, I feel like we all are doing that.

J: A lot of people don't think about consequences or about long term plans. Like I was a history major in college and I think my tendency is to take the things that have happened and then apply them. I can predict that this thing will happen because I have already experienced these other things.

M: I would love to pick your brain about your Why be Credible When You Can Be Incredible HuffPo piece? http://www.huffingtonpost.com/daniel-armbruster/why-be-credible-when-you_b_8464032.html

J: That came about because we started to get really irritated with interviews. Not all interviews just certain ones when people would send like college interns they didn't have to pay and these kids clearly didn't know anything about our band and ask if you were an animal what animal would you be? And, I'd be like is this really the question you want to ask me right now? They'd be like Uhhhh, well listen I'm not that familiar with your band. I'd be like alright well then just don't interview our band, go do something else. I don't need to answer what my favorite color grid is and I was frustrated because there were a lot of things that I wanted to say about specific songs on the record or how it came about. You know it means a lot to us so to be reduced to like favorite color questions was like frustrating. I wrote an essay for like every song on the record. You know, this was the recording process behind it, this is the meaning behind it. This is its place on the record. Bands have been stoked on it but yet journalist weren't asking the right questions.

M: I love that you expressed that and being able to listen from my perspective as an interviewer. To know that some journalist are disconnected in that area but how much that matters to artist. I am someone who goes deep and I have even received feedback that, Oh you went to heavy.

M: Yea, I have a rule I don't ask a question that I can answer myself.

M: Yes, so with the record break down within the piece, how has that been received? Do you feel like that added to your fans appreciation for Joywave's music. Cause like the creative process is so personal yet then you just give it away. It's this weird like Oh...I dont want this to be ripped apart but at the same time you put it out for it to be public.

J: Yea, and the record happened at this weird time in my life where I was like post college. I had nothing going on and everyone in our generation its like our parents tell us to go to college then you get a job, thats like the "recipe for success". It's like we went to college we graduated and like I graduated as like the stock market crashed and as the recession happened it was like Oh, never-mind there's no jobs for you. So, its like alright well what do I do? My way of dealing with that was, I was living at home in my childhood bedroom and would write songs. I didn't know what else to do with my time. So the record kind of captures that period of like alright well, nothing is going as planned and its like my life is not going to be the way I thought it was when I was when I was in 7th grade.

M: Wow, I agree and understand that place. What would you say to another band or individual artist that looks up to you yet they haven't quite hit that exponential growth and can not conceptualize that its possible? For a lot of people it is a dream to be performing at Coachella and going on tour with the Foals and Silversun Pickups and so forth. You are doing it and living most people's dreams.

J: I think its important for people to do whatever is real to them. There's a 99.999999% chance that people will fail at trying to be in a band or going on tour and play at Coachella and do the things that we are doing. And.. I thought that was going to be us and nothing went right for us until I stopped trying to do what people told me to do or what we should do and started doing what I wanted to do. Cause I was like we're never going to be successful anyways so we might as well make what we want to make. Then people started connecting, they were like oh this is real and thats what it takes.

M: That was well said, and so wonderful to sit and chat with you guys. Thank you so much.

J: Thank you so much.

Come share this journey with me @mushakalakalaka for the great exclusive interviews.
http://www.melissamushaka.com