SANDY, Utah -- Jozy Altidore continued his incredible run of form, scoring in the 73rd minute to lead the United States to a 1-0 victory over Honduras in World Cup qualifying at Rio Tinto Stadium on Tuesday.

As a result, the U.S. remains at the top of CONCACAF's Hexagonal with 13 points from six matches, pulling further away from Mexico and Costa Rica, which started the night with eight points apiece.

Altidore has now led the U.S. to four wins in a row - including a victory over second-ranked Germany in a friendly and three World Cup qualifiers - with four goals during that stretch, tying six other players for the longest goal-scoring streak in U.S. history.

"We are very happy for Jozy," coach Jurgen Klinsmann said. "We always told him from a coaching perspective that it takes a lot of hard work, it takes a lot of adjustment, it takes the right moment to be there, it takes the hunger. The energy he has put in the last four or five games has been tremendous. It's not only that he scored those goals, the work he does for the team is awesome."

The Stars and Stripes end the latest block of qualifiers 3-0. They will play four more games next fall, starting with a road match against Costa Rica on Sept. 6

The Americans got off to a sluggish start against Honduras but showed signs of life early in the second half while playing in the high-altitude Rocky Mountain air. They dominated possession throughout but couldn't capitalize on several set-piece opportunities.

It took 59 minutes for the U.S. to get its best scoring opportunity, but Altidore was called offside after putting the ball past Noel Valladares into the back of the net. From that point on, the U.S. completely took over the match and it was only a matter of time before it put a point on the board.

In the 72nd minute, Altidore would finally provide the breakthrough goal after Fabian Johnson received the ball in the box and delivered it in the front of the net for the open Altidore to put it home.

Altidore had entered 2013 on a nearly two-year scoring drought in open play.

"A good team finds ways to score and that's what they did. They scored and they deserve a huge compliment," Klinsmann said. "In a game like this, what really matters is that you keep going and be patient and find the goal."

Honduras, which had defeated the U.S. 2-1 on Feb. 6, had its best chance of the game in 45th minute when Andy Najar took advantage of a U.S. turnover in the midfield and had a clear path to the goal, forcing Tim Howard to make the biggest save of the day.

Howard has shut out the last two opponents, Panama and Honduras.

"Every time we get a clean sheet, we feel like the best players in the world," Howard said. "We've been on a roll. It's good for the young guys in the back. It gets us feeling good about ourselves. Every time we have a good performance, we put in our back pocket and save it."

Klinsmann made changes to his starting lineup for the second straight game. DaMarcus Beasley, who had started the previous six matches at left back, missed the match while serving a one-game suspension because of yellow card accumulation. He was replaced by Johnson.

Graham Zusi and Jermaine Jones both returned to the midfield after sitting out a 2-0 victory over Panama last week. Zusi sat out because of yellow card accumulation and Jones had missed action after suffering a mild concussion in a 2-1 victory over Jamaica on June 7.

After meeting Costa Rica in early September, the Yanks will close out qualifying against Mexico, Jamaica and Panama. The top three finishers in the Hex advance to the 2014 World Cup in Brazil, while the fourth-place team will face New Zealand in a one-game playoff for the last spot.

"The team now understands it's not only a physical grind you put into these games. It's a mental one," Klinsmann said. "Mentally we're getting stronger. We're getting tougher. We are now prepared to go through the games." 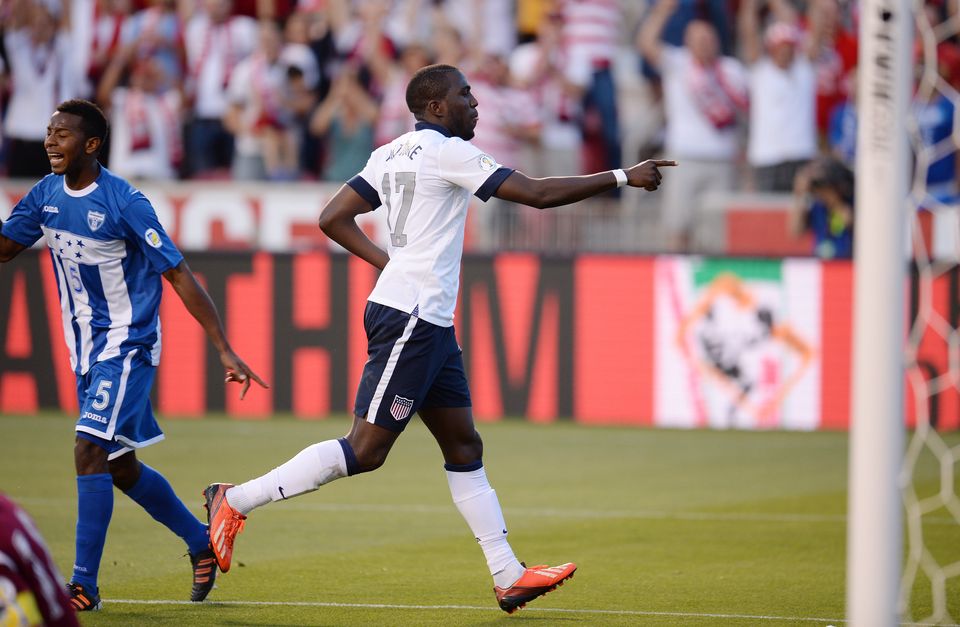