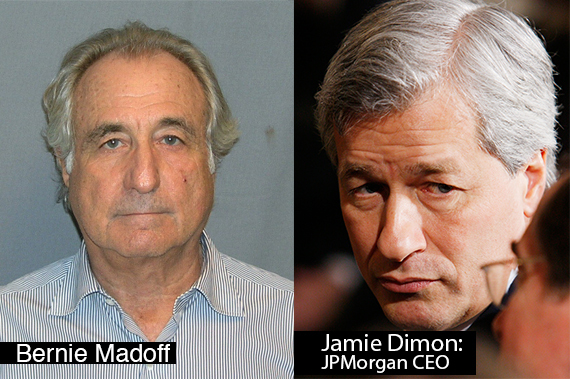 As the headlines have made clear for years, JP Morgan Chase has a long rap sheet of illegal conduct and, although overlooked, it includes enabling Bernie Madoff's $64.8 billion Ponzi scheme, the largest in history, which caused net losses of more than $17 billion and untold human wreckage.

Six years ago on December 11, 2008, federal agents arrested Madoff, the ringleader of the Ponzi scheme -- as a coda to an age of regulator and prosecutorial incompetence and neglect, Madoff was not caught; he was arrested after turning himself in. This happened in the middle of the largest financial crash since 1929, when the country's economy was collapsing and when a second Great Depression was a very real possibility. Although not responsible for the crash and collapse, Madoff in handcuffs was in some ways the face of Wall Street greed and criminality.

However, that is a false and misleading picture of crime on Wall Street.

After all, how could this one guy possibly pull off such a crime and at that scale and for so long? He couldn't have and didn't. Like most substantial illegal and criminal financial activities, Madoff had a very close relationship with a big Wall Street bank: JP Morgan Chase, the country's largest bank. Given the focus on the crash and economic calamity in 2008 and JP Morgan Chase's years-long efforts to prevent any information from being publicly disclosed, JP Morgan's role in enabling this massive crime wasn't publicly known for years.

That veil of secrecy ended when a compliant was filed by a court appointed trustee to recover funds for the thousands of injured investors, as summarized in this article: "Trustee: JP Morgan Abetted Madoff." In the complaint, the trustees alleged that JP Morgan Chase "was at the very center of the fraud, and thoroughly complicit in it." JP Morgan Chase, the complaint stated, "turned a blind eye to" Madoff's fraud."

Madoff's decades long fraudulent scheme resulted in the loss of "$64.8 billion in paper wealth and at least $17.5 billion in cash losses." The second, third and fourth largest Ponzi scheme losses in history collectively only amounted to 60% of what Madoff stole. While this was happening, JP Morgan made hundreds of millions of dollars from "servicing" Madoff's accounts and saved itself another $276 million invested with Madoff by remarkably well-timed withdrawals, conveniently just before the scheme was revealed. All of this is documented in the complaint.

Moreover, there is clear information that JP Morgan Chase, including senior officials in compliance and elsewhere, knew about the Ponzi scheme long before Madoff decided to turn himself in. In fact, it appears that JP Morgan Chase "ignored red flags for about 15 years" that Madoff used JP Morgan Chase accounts to run his fraudulent scheme. Just one egregious example: the complaint quotes (p. 31+) from a June 15, 2007 email from John Hogan, Chief Risk Officer, Investment Bank, JP Morgan Chase to Matt Zames, a senior executive and head of several business lines, stating:

"For whatever its worth, I am sitting at lunch with Matt Zames who just told me that there is a well-known cloud over the head of Madoff and that his returns are speculated to be part of a [P]onzi scheme...."

Thus, 18 months before Madoff turned himself in, JP Morgan officers suspected that Madoff was or might have been running a Ponzi scheme. If JP Morgan Chase had taken action then, who knows how much money would have been saved and how many lives would not have been ruined. One must ask also how much revenue and profits JP Morgan Chase might have lost if Madoff had been discovered earlier.

And, then, in October of 2008, JP Morgan Chase said in a report that Madoff's "'investments appear too good to be true -- meaning that it probably is.'" What did it do? Other than surreptitiously withdrawing its own $276 million investment, effectively nothing: it filed a report with a banking regulator in the UK. Did it tell anyone in the US? No. Did it tell the SEC? No. Did it tell the FBI? No. Did it bring the report it filed in the UK to anyone's attention? No. (As is too often the case when it comes to Wall Street, the media downplayed JP Morgan's role in enabling Madoff's crimes, one even referring to the years long indefensible conduct as mere "lapses.")

Six years later, after $17 BILLION -- net -- were lost and thousands of investors' lives have been ruined, turned upside down or otherwise damaged, Madoff is sitting in a prison cell, sentenced to 150 years, as are a number of his former workers and co-conspirators. (Although, unfortunately, all the sentences but Madoff's "fall far below federal guidelines.")

But no such punishment for JP Morgan Chase. Earlier this year, it got to use today's shareholder money to pay a fine to make it all go away. Instead of pursuing criminal charges, prosecutors opted to settle with JP Morgan for "$2.6 billion, ending all charges." The US Attorney stated that JP Morgan Chase "failed miserably" as a financial institution and "connected the dots when it came to its own profits, but not when it came to its own legal obligations."

Most indefensible, despite a deep, close and extremely lucrative relationship that lasted decades, JP Morgan Chase wasn't even required to publicly disclose the information that detailed its complicity in Madoff's scheme, including how much money it made and how; who got the bonuses from the money of thousands who were ripped off; where those employees and officers are now; and how it and they could have ignored so many clear warnings over so many years that cost so many other people a great deal -- if not all -- of their savings.

There is one bright spot: as reported yesterday, a court appointed trustee is recovering another $600 million for victims, bringing the total amount of recovery to approximately $10.5 billion.