JPMorgan Chase has a problem: It’s taking in money faster than it can lend it out.

As long as this trend continues, the biggest bank in America by assets will drift further away from a commercial bank’s core social and economic role of lending.

At the end of the third quarter, the bank was lending out just 56 cents for every dollar it had in deposits, according to earnings results released on Tuesday. At JPMorgan, that figure – known as the loan-to-deposit ratio – has been low and falling for years. In 2012, I made a chart showing how the bank's excess deposits – the value of total deposits minus total loans – had risen after the crisis. That's money customers have given the bank, but that the bank isn’t lending.

Back then, the bank’s loan-to-deposit ratio was a now rosy-seeming 64 percent. JPMorgan’s excess deposits were growing then on both an absolute and relative basis, and in the past two years they’ve kept on growing.

Here’s an updated version of the chart: 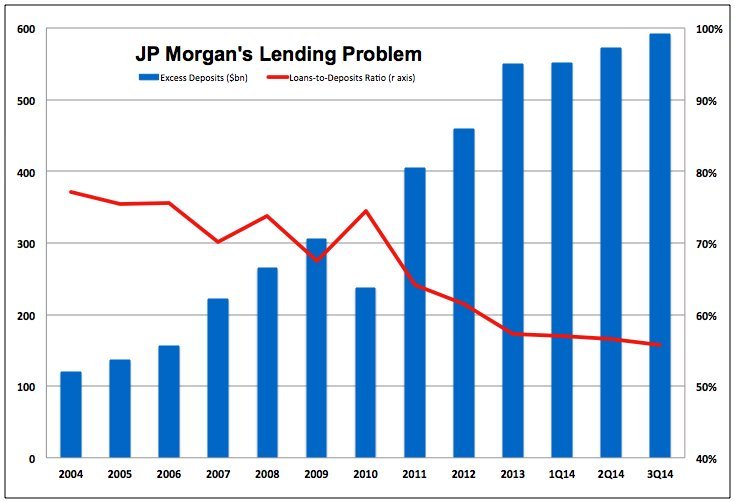 This is a chart showing a bank acting less and less like a bank. Banks take in deposits, lend a large portion of those deposits and buy things like bonds with the money that’s left over.

That’s pretty much what JPMorgan’s competitors, on a grand scale, do. Citigroup’s loan-to-deposit ratio is 67 percent. Wells Fargo’s is 76 percent. Bank of America’s is 80 percent. JPMorgan, on the other hand, is a bank that enjoys taking your money, but is less and less interested in loaning it out.

The scale of what JPMorgan’s isn’t lending is staggering: The total value of Bank of America, Citigroup, and Wells Fargo’s combined excess deposits is $766 billion. JPMorgan alone has $590 billion in excess deposits. JP Morgan has more excess deposits than any two of its three major competitors combined.

If JPMorgan loaned at about the same rate as Bank of America or Wells Fargo, it would create $325 billion in additional loans. That would have a big economic impact, even in a $16 trillion economy. That’s more than the $240 billion in loans at the ninth-biggest American bank, U.S. Bancorp.

It’s unclear why JPMorgan can’t find more loans to make, and the bank did not immediately respond to a request for comment. Its competitors don’t seem to have a similar problem. It’s not like US government debt is going to deliver stellar returns, with yields on 10-year Treasurys now below 2 percent. JPMorgan executives could lend hundreds of billions of dollars more and still be able to lose $6 billion on a random credit derivative when the fancy strikes them.

Whatever the reason, the U.S. economy can’t afford to have the country’s de facto seventh-largest bank by deposits doing absolutely no lending.