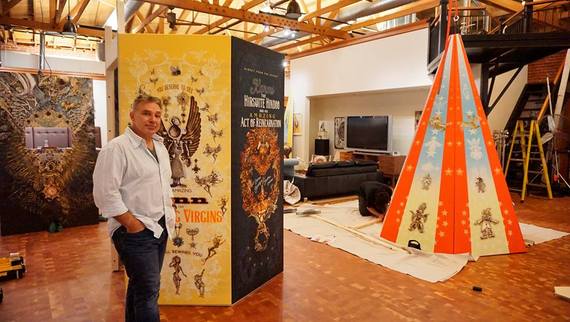 JT Burke in his studio

You know how some people deal with thorny topics and controversies by using humor? Self-deprecating or satirical, comedy can go a long way toward defusing tensions and broadening access to complex ideas. Of course, sometimes it makes things worse, adding to perceived disrespect regardless of intention. But artist JT Burke is willing to take that risk. An immersive sculptural installation with lights and music and kaleidoscopic photography- and graphics-based visuals, Paradise Circus is Burke's way of processing fundamental and deeply personal questions about religion, faith, the afterlife, exclusionary orthodoxies, ritualized behaviors, and shared mythologies. But it's also a giant illuminated circus tent whose flaps lavishly and irreverently depict the salvation fables of several of the world's major religions, and whose main event cheekily encourages the penitent to seek salvation within its walls. What could possibly go wrong? 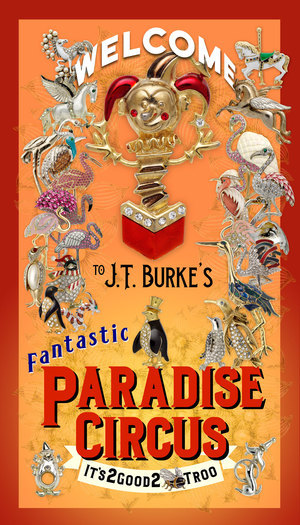 Burke was raised in a fairly strict Catholic tradition (yes, he was an altar boy), and, like so many who were, later in life began to question certain tenets of his faith. For him, it seemed both especially attractive and absurd that any single religion could have such a lock on a specific prescription for gaining entrance to paradise after death that its adherents alone were eligible for heaven, while everyone else was in grave error and therefore doomed to damnation. Out of curiosity, he started comparing world religions and their fables of the afterlife -- what they promise, what they threaten, and what they require for entry. Being an artist and something of an obsessive collector of images himself, the connections, overlaps, and conflicts he thus discovered play themselves out visually across many levels of the Circus -- all filtered through the oh-so-Catholic concept of repentance and submission. 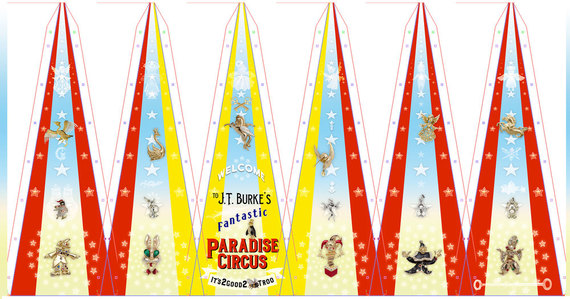 Each individual printed component of the structure combines a vintage graphic-design style with central images and icons composed in the exactly the way Burke makes his own popularly admired photographs -- through collage and assemblage of figures and scenes using the thousands of items of fancy jewelry he's collected over the years for this purpose. Each frame is therefore rich in saturated color, shine, opulence, and narrative -- as fancy as a real religious icon can be. Slogans like: Heretics Burned Daily!, Eternal Truths Revealed!, Holy Cow!, and Angels! Angels! Angels! are illustrated by shining sunflower starbursts, glittering cherubim, jokers, flowers, fantastical creatures, and flying virgins. Once inside, if you are lucky enough to make it that far, and get a ticket to the big show -- you see the true visage and vista of Paradise. In these and other ways, Burke not only telegraphs the deeply personal nature of the inquiry, but also tapping into the rich history of art made in the service of religious architecture whose function was to illustrate the central points of dogma and engender faithful fervor.

For Burke, the allegory of Paradise Circus is not really about satirizing any individual faith per se, his own or anyone's -- it's more about shining a light on the absurdity of killing one another over competing theories of the unknowable. If this sounds like a dark path for public art to take, then you know why Burke chose to light it up with wit.

Paradise Circus will be installed at the LA Art Show in January 2015. Follow its progress at the artist's studio blog, or on Facebook.