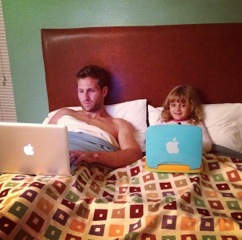 Where does the new stepmother fit in this picture?

Juan Pablo is the latest single guy looking for eternal and everlasting permanent love on this season of "The Bachelor". Yes, I see you rolling your eyes and I can already hear the criticisms, "The show is fake", "They never find love," etc. No one with a triple digit IQ is going to argue with you but this article isn't about whether or not "The Bachelor" is real or works. It's about a guy on national TV espousing many of the myths about stepmoms and stepfamilies that while they may sound reasonable, are about as realistic as "The Brady Bunch".

Juan Pablo declared from the get-go that he wants to find the "perfect wife and stepmom" for his daughter Camila. He's made it clear that his future wife must love both him and Camila "unconditionally" and must love Camila "as her own." Additionally, this woman needs to know that his daughter, born on Valentine's Day is his "everything" and will always be his "everything. He's also made it clear that he is a good friend with Camila's mother and that they are in constant contact and do things together as a family. He cements the deal by adding, "This is how it is". Period.

Well alrighty then. I'm glad he's clear about what he wants. He mirrors the culture's expectations of the "perfect stepmother". Any good stepmother loves unconditionally, becomes buddies with the mother of her man's child, knows that the parental relationship comes first and humbly accepts fourth place in the family system.

Over 25 bachelorette hopefuls seem to accept Juan Pablo's conditions without question. They think it's so "sweet" that he's a dad and that his five-year-old daughter is so "special". They've clapped their hands in glee over the prospect of living their lives in servitude for the betterment of the family, even if it's at their own expense.

If I had the opportunity, I'd love to sit down with Juan Pablo and his stepmother-to-be hopefuls and knock some reality into their senses.

The lights dim, the camera pulls away... and then there's real life.

The reality is that 62-74% of second marriages/relationships with children fail. Stepmothers suffer from depression at significantly higher rates than biological mothers.

Real life quickly shows that the children involved in these families aren't doing cartwheels over the new woman in Daddy's life. Children are often very attached to both of their parents and often feel loyalty binds towards their mothers when their fathers bring a new woman into the picture. Often the child is accepting of the new relationship before any notions of permanence, but the day their Dad says, "I do" for the second or third time, they may find themselves longing for Mommy and Daddy to be together (as most children seem to do) and resist any well-meaning efforts by the new stepmom, leaving the new stepmom feeling like a Major Outsider, which from a biological reality, she is.

In the last episode of "The Bachelor", Juan Pablo inappropriately brought one of the stepmommy hopefuls to his daughter's dance recital (please do not introduce an "other" to your children until they become a significant other!). The blushing bride-to-be hopeful not only got to meet Juan Pablo's daughter, but his parents and Camila's mother as well. Later, when they were alone, she had the good sense to ask, "Where do I fit in?"

I've spent over a decade working with stepmothers who didn't think to ask that question. They assumed that they would be partners with their husband and they would be a team. They didn't think about how it would feel when they had their own children and they had to accept that this was not their partner's "first". Many found out the hard way that the children resented their very existence and would spend years letting them know that they didn't appreciate not having a choice in the matter. Many weren't as lucky as Juan Pablo's suitor to have a mother in the picture that didn't feel the need to compete with her or draw rigid lines across the sand when it came to the care and feeding of her children.

Given the dismal divorce statistics, one might ask, "Why ever marry someone with children?" The question is fair but the truth is that stepfamilies, families living together without marriage and singles outnumber the nuclear family and the stepfamily is here to stay.

When stepmothers come to me, often as a last resort, I give them realistic hope. Second marriages do not need to have such a high divorce rate and there are solutions that work. But the solutions veer from the high expectations of the stepmother by a culture that just doesn't get it because they've never been in their shoes.

If you're looking for the "perfect" stepmother or you're a woman partnered with a man who has children, practicing these five solutions will serve to keep you together in the long run.

1. Know and expect that it takes 4-6 years for the average stepfamily to feel even somewhat comfortable with one another.

3. Work on being a team and the heads of the home.

4. Know that true love takes time and is not something that can be demanded. All grown ups and children should act in kind and loving ways to all members of the family.

5. Go on Date Night when the children are in your care. It's good parenting to model that good relationships need to be nurtured and that it's important to have time alone.

I wish Juan Pablo all the best in his search for the perfect wife and stepmom. He'll have a better chance of finding her if he lets go of finding a woman who is more like a saint than a human being.

More:
stepmothersdivorcestepparentingthe bachelorBlended Families
Newsletter Sign Up
A weekly guide to improving all of the relationships in your life
Subscribe to HuffPost’s relationships email
Successfully Subscribed!
Realness delivered to your inbox