A long-lost gospel that casts Judas as a co-conspirator of Jesus, rather than a betrayer, was ruled most likely authentic in 2006. Now, scientists reveal they couldn't have made the call without a series of far more mundane documents, including Ancient Egyptian marriage licenses and property contracts.

The Gospel of Judas is a fragmented Coptic (Egyptian)-language text that portrays Judas in a far more sympathetic light than did the gospels that made it into the Bible. In this version of the story, Judas turns Jesus over to the authorities for execution upon Jesus' request, as part of a plan to release his spirit from his body. In the accepted biblical version of the tale, Judas betrays Jesus for 30 pieces of silver.

As part of a 2006 National Geographic Society (the Society) investigation of the document, microscopist Joseph Barabe of McCrone Associates in Illinois and a team of researchers analyzed the ink on the tattered gospel to find out if it was real or forged. 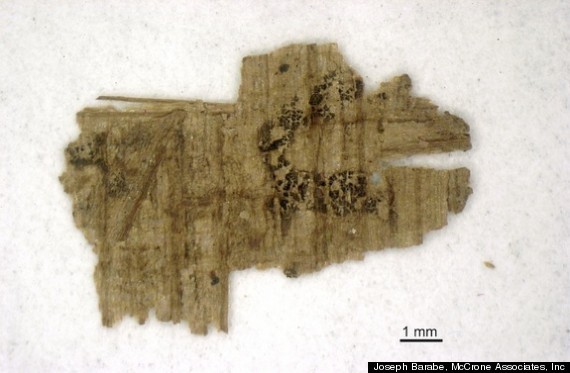 A fragment of the Gospel of Judas with writing.

Some of the chemicals in the ink raised red flags — until Barabe and his colleagues found, at the Louvre Museum, a study of Egyptian documents from the third century A.D., the same time period of the Gospal of Judas.

"What the French study told us is that ink technology was undergoing a transition," Barabe told LiveScience. The Gospel of Judas' odd ink suddenly fit into place. [Religious Mysteries: 8 Alleged Relics of Jesus]

Barabe and his colleagues specialize in thorough investigations of old — or supposedly old — documents and artwork. The chemical composition of inks used can reveal the difference between something authentically ancient and a forgery. In 2009, Barabe helped expose a gospel called the "Archaic Mark," which some claimed was a 14th-century manuscript, as a modern forgery. He's also worked with the Federal Bureau of Investigation to detect forged paintings.

A call from National Geographic, however, was a "big deal," Barabe said. "It was both thrilling and an honor," he added.

The Society wanted to find out if the Gospel of Judas, discovered in the 1970s, really dated back to early days of Christianity or whether it was, like Archaic Mark, a fake. Barabe brought together a team of scientists with a variety of specialties, and they ran the Gospel through an intensive analysis of microscopy and spectroscopy. [See Images of the Ancient 'Gospel' Documents]

At first, their findings offered little hope that the Gospel of Judas was real. The document was written in two inks — black and brown — mixed together. The black was an ink called "lamp black," which was consistent with the inks used in Egyptian writings from ancient times and into the third century, Barabe said.

But the brown ink was more mysterious. It was an iron-rich ink called iron gall, but it lacked the sulfur usually found in inks of this sort. The pressure was on to explain the difference.

"One thing that made this a little bit more dramatic than we would have liked is, we did the sampling in the third week of January of 2006, and the press conference was already scheduled for the third week in April of that same year," Barabe said. "So we had three months to turn this critter around with a conclusion, and it really put an enormous amount of pressure on us, because we were faced with what was essentially a three-month rush project."

Some facets of the document did suggest authenticity. The most promising of these characteristics, Barabe said, was that the ink wasn't piled up in the warped papyrus, suggesting the document was written before the warping happened. Had someone tried to write on a pre-warped papyrus, the ink would have gathered in crevices and dips — a sure sign someone had intentionally tried to make new papyrus look old. Instead, the Gospel seems to have been written on flat papyrus and aged naturally. National Geographic also commissioned other analyses of the Gospel, including radiocarbon dating, script analysis and linguistic style.

Barabe hit the books, looking for other studies on early Egyptian inks. The study of Egyptian marriage certificates and land documents from the Louvre proved to be the clincher.

The Louvre study findings suggested to the team that the presence of both inks was consistent with an early date for the Gospel of Judas, Barabe said.

What's more, the Louvre study found that the metal-based inks from this time period contained little sulfur, just like the ink on the Gospel of Judas.

The discovery gave the researchers the confidence to declare the document consistent with a date of approximately A.D. 280. (Barabe and his colleagues caution that this finding doesn't prove beyond doubt that the document is authentic, but rather that there are no red flags proving it's a forgery.)

"There was definitely a point where, all of the sudden, I just kind of relaxed and said, 'This is probably just fine,'" Barabe said.